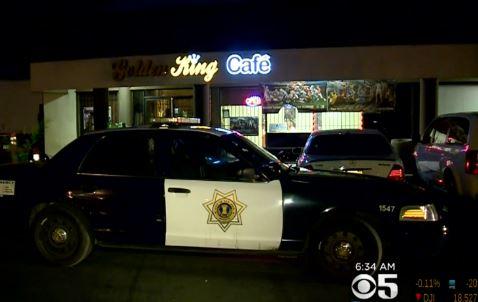 Officer Derrick Antonio was placed on paid leave two months ago in the middle of the investigation when investigators determined he was sharing sensitive information including police reports with gang members, San Jose Police Chief Eddie Garcia told reporters.

Antonio is a nine-year veteran with the department. The San Jose Police Department worked closely with the Santa Clara District Attorney’s Office, the Drug Enforcement Administration, and the FBI to execute the operation, CBS San Francisco reported.

“His acts were deplorable and in no way represent the character of the remaining members of this department,” said Garcia.

Law enforcement sources told CBS San Francisco that gang investigators had been listening to wiretaps for months. They had no idea a cop was involved until they heard a suspect say something like “have your guy check NCIC” to see if they were being watched.

Authorities arrested 22 other people in the probe named “Operation Gang of Thrones,” making the arrests and executing search warrants in several places, including San Jose; Anaheim, California; and in Louisiana. They were booked on suspicion of offenses including extortion, drug trafficking, illegal gun possession and conspiracy. Authorities were searching for six more suspects.

The searches netted $200,000 in cash, 4,000 Ecstasy pills, 600 pounds of marijuana, body armor and the alligator retrieved by San Jose animal control workers after it was found. Louisiana State Police seized more than 400 pounds of the marijuana in transit from San Jose.

Garcia called the allegations the officer faces deplorable, but also said they should not reflect badly on the entire San Jose police department.  “Once his involvement was known, they did not hesitate or shy away from bringing a fellow member of this department who had tarnished the badge we wear so proudly to justice,” Garcia said.

Garcia said he did not know why the officer allegedly passed the information to gang members.

Sean Webby, spokesman for the district attorney’s office handling the case, said he did not know if Antonio had a lawyer who could be contacted for comment.

The police association for San Jose did not respond to a message inquiring if the arrested officer had a lawyer.