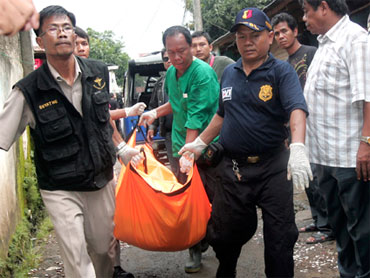 Anti-terror police hunting a mastermind of the 2002 Bali bombings killed three suspects near Jakarta on Tuesday, police said. Officials said they believed a militant behind Indonesia's worst terror attack was among the dead, but police were still trying to confirm his identity.

The first suspect was killed after he shot at police in a raid on an Internet cafe southwest of the country's capital on the main Indonesian island of Java, police spokesman Maj. Gen. Edward Aritonang said.

Aritonang said that suspect had fired a single shot from a revolver before he died.

Local media and two Indonesian authorities who did not want to be named said that the suspect was believed to be Dulmatin, a suspected mastermind behind the bombings of Bali nightclubs that killed 202 people. Dulmatin, an electronics specialist with training from al Qaeda camps in Afghanistan, was thought to have fled to the Philippines. Like many Indonesians, he uses one name.

However, Aritonang said authorities were still trying to determine the identity of the suspect.

"We will announce who he is as soon as police identify him," Aritonang said.

The Internet cafe manager Rinda Riyani said the suspect was a customer who had begun using an upstairs computer only five minutes before plainclothes police rushed in.

"I heard gun shots and later saw the man was dead," said Riyani, who had been downstairs and did not see the shooting.

Two customers, a man and woman, were taken by police for questioning, he said. Police have not said whether the pair were suspects or were being questioned as witnesses.

Police later shot and killed two suspects as they fled on a house where two others were arrested, Aritonang said. One of those killed had been firing a handgun.

Aritonang said another terror suspect had been arrested in Jakarta on Tuesday before the two raids, bringing to 24 the number of suspects taken into custody on Java and Aceh since Feb. 22 in a police crackdown on a suspected Jemaah Islamiyah cell in Aceh. The JI is a regional offshoot of the al Qaeda terror group.

Aritonang said the raids on Tuesday were based on information gleaned from those already arrested.

A government official told the AP on condition of anonymity because he was not authorized to speak to the press that the suspects captured in Aceh had provided police with information about Dulmatin's whereabouts.

Dulmatin had been seen in the southern Philippines as recently as three months ago, the official said.