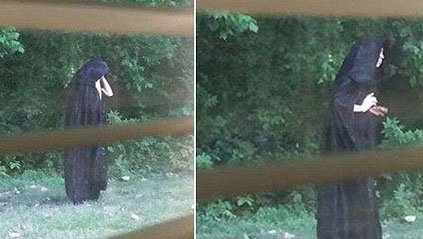 GASTONIA, N.C. -- A post online has Gastonia police investigating claims that a cloaked figure was leaving raw meat near a playground in a North Carolina town, reports CBS affiliate WBTV.

Whether the photos are a prank or not, it still has some residents on edge. According to posts online, the mysterious pale figure, "sparked fear among locals after it was reportedly caught on camera standing outside an apartment complex in Gastonia, North Carolina, dressed in a dark cloak."

"It could have come from anywhere," Lahser said. "We don't know if this is some bogus prank someone is playing."

Rumors swirling online are that the person wore floor-length, hooded attire. But the identity and gender of the cloaked figure are unknown.