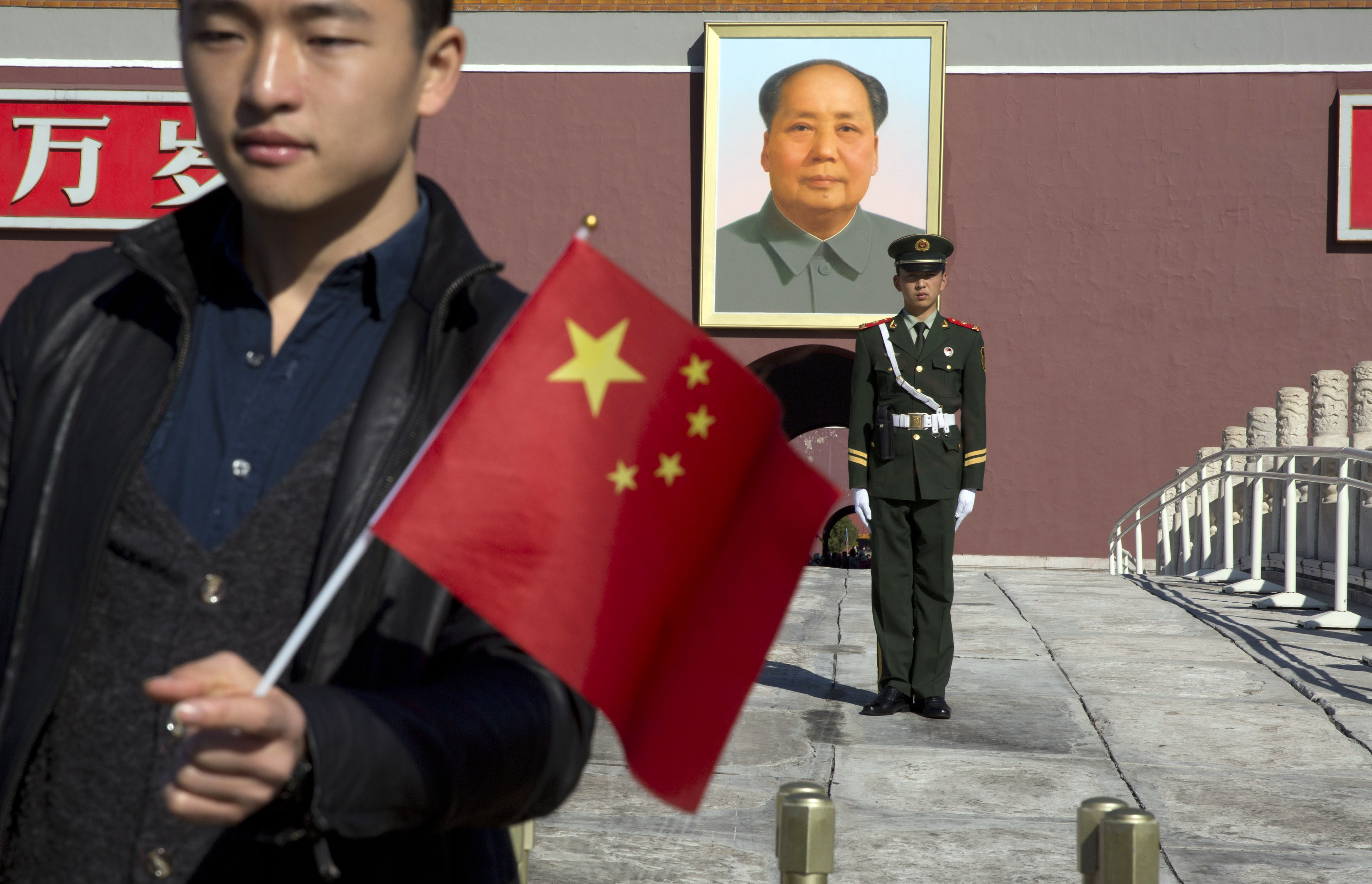 Police released no word about a possible motive for Monday's incident at Beijing's Forbidden City, one of China's most politically sensitive and heavily guarded public spaces. But investigators sent a notice to hotels in the city aimed at tracing the movements of two suspects, and possibly at uncovering any other conspirators.

It was unclear whether the two Uighurs were believed to have perished in the car or were still at large, and whether they may have been linked to militant groups in the western region of Xinjiang, where radicals have been fighting a low-intensity insurgency against Chinese rule for years.

If Monday's incident was such an attack, it would be the first in recent history outside of Xinjiang, and the boldest and most ambitious given the high-profile target.

The sports utility vehicle veered inside a barrier separating a crowded sidewalk from a busy avenue and then plowed through pedestrians as it sped toward Tiananmen Gate, where it crashed into a stone structure near a large portrait of Mao Zedong which hangs near the entrance to the former imperial palace.

The vehicle's three occupants were killed along with two bystanders, including a Filipino woman. The 38 injured included three other Filipinos and a Japanese man, police said.

The gate stands opposite sprawling Tiananmen Square, which was the focus of the 1989 pro-democracy movement that was violently suppressed by the military, and any incident there is highly sensitive.

If intended as a political statement, Monday's attack could hardly have picked a more significant target. Just west of the square lies the Great Hall of the People, the seat of China's parliament, while many of China's top leaders live and work just a few hundred meters (yards) away in the tightly guarded Zhongnanhai compound.

Xinjiang is home to largely Muslim ethnic Uighurs, who are culturally, religiously and linguistically distinct from China's ethnic Han majority. Many have chafed under heavy-handed Communist Party rule.

Zhao Fuzhou, a security official at Beijing's Xinjiang Dasha hotel, said police had circulated a notice seeking information about two suspects with Uighur names in the aftermath of Monday's incident. A clerk at the Hubei Mansion hotel also confirmed receiving the notice, while employees at other hotels said they'd been told not to discuss the matter.

The notice asked hotels about the two suspects, and to report any suspicious guests or vehicles registered with their establishments going back to Oct. 1. One of the men, identified in the notice as Yusupu Wumaierniyazi, was listed as living in a town in the northwestern Uighur homeland of Xinjiang in which 24 police and civilians and 13 militants were killed in an attack on June 26.

In Xinjiang this year, dozens of people have been killed in clashes between security forces and Uighur militants, who the government says have been inspired by global jihadist teachings and joined al-Qaeda-inspired fighters in Syria.

China has provided little direct evidence to back up those claims. However, Xinjiang borders Afghanistan and unstable Central Asian states where militant Islamic violence is a regular occurrence and Uighurs are believed to be among the militants sheltering in Pakistan's lawless northwestern region.

Authorities had earlier warned that extremists were planning attacks outside the Xinjiang region. A smothering security blanket has made organization difficult for the extremists, denied them safe havens, and severely limited their access to firearms and explosives.

Monday's incident had every appearance of being deliberate, since the driver apparently jumped a curb and traveled about 400 meters (yards) to the spot where the car was said to have caught fire. Along the way, it avoided trees, street lights and at least one security checkpoint. The attackers also struck during the lunch hour when security would have likely been relatively slack.

Witnesses quoted in Chinese media said the SUV's driver honked his horn as he drove along the sidewalk, suggesting mass murder was not the intention. Photos showed flames licking the vehicle and a huge cloud of smoke, although there was no word on whether an incendiary device had been activated or shots fired.

"The vehicle ran very fast, I could hear people screaming all the way while the vehicle ploughed through the crowds," the Global Times newspaper quoted an unidentified female witness as saying.

Authorities moved swiftly to clear the scene of any evidence of the incident and national media provided only slight coverage of what had happened.

Philippine Department of Foreign Affairs spokesman Raul Hernandez told ABS-CBN TV in Manila that the Filipino who died was the mother of two daughters and had been vacationing in Beijing. He said her husband and one of her daughters were hospitalized with fractures, while the other daughter suffered only minor injuries.

A Japanese Embassy spokesman, speaking on the usual condition of anonymity, said the Japanese citizen remained hospitalized but his injuries were not believed to be life threatening.

Police said the other tourist killed was a Chinese man from the southern province of Guangdong.

Monday's incident revived memories of violent episodes in and around Tiananmen Square. In 2001, five reported members of the outlawed Falungong spiritual sect set themselves on fire in the square in a protest against government suppression, while three people from Xinjiang protesting land seizures set themselves alight in the busy Wangfujing shopping district just to the east.