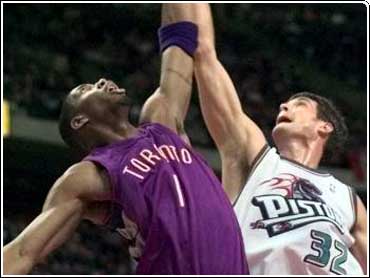 The way Detroit coach Alvin Gentry saw it, the Pistons didn't get much help from the officials in a 115-108 overtime win over the Toronto Raptors on Wednesday night.

"Vince Carter is a great player and one of the most exciting talents in this league, but he's getting all the calls that Michael Jordan used to get," Gentry said. "Maybe it is a North Carolina thing. But if Vince Carter is shooting 15 free throws like he did tonight, Grant Hill should be shooting at least 20. It can't be a clean block every time he goes to the basket."

"It was a tough game, and it seemed like everything was stacked against us, but we fought through it," said Detroit's Jerry Stackhouse, another North Carolina product. "They had some help catching up, but I'm not going to say any more because I don't have the money." victory over the Toronto Raptors.

"We gave it everything, but it wasn't enough," Carter said. "Usually, when we fall behind, we don't get back into it. We just lose. Tonight, we had a chance to win."

Carter's layup made it 108-107 with 1:08 left, but Antonio Davis fouled Hunter who made both free throws.

Hunter finished with 28 points, including eight in overtime.

"I really wanted to assert myself in the second half, because we weren't able to run," he said. "Any time you lose one at home, it is tough, but this one would have been even worse."

Stackhouse split his free throws to give Detroit an 111-107 edge, and the Pistons were able to put it away from the free-throw line.

Tracy McGrady added 20 for Toronto before fouling out.

In their previous visit to Detroit, the Raptors scored 41 first-quarter points in a 123-106 victory. On Wednesday, Toronto didn't reach 41 points until the last 30 seconds of the first half.

"They are a good defensive team, and they had fresh legs," Raptors coach Butch Carter said. "That let them get a lot of transition baskets - you can't let Jerry Stackhouse and Grant Hill start running up and down."

Hunter was the only Piston to score in the first six minutes of the third, but his 12 points were as many as the Raptors could manage in the same span.

Toronto, though, turned an illegal-defense technical and a three-point play by McGrady into a four-point trip, and trailed by just 91-87 with 4:41 left.

Hunter's 3-pointer gave the Pistons a cushion at 96-89, but Toronto kept coming, and Carter's dunk made it 97-95 with two minutes left.

Hunter split two free throws, but McGrady was called for a charge as he tried to cut it to one point.

Christian Laettner missed, then fouled Carter who hit twice to make it 98-97.

On the ensuing possession, Workman stripped Hill and hit an open jumper to give Toronto their first lead of the game, 99-98.

Workman fouled Hunter, who hit both free throws to put Detroit up 100-99 with 29.6 seconds left.

Laettner fouled Antonio Davis with 27.5 seconds left, and the veteran hit one to tie it at 100.

ohn Crotty's 3-pointer with five seconds left was blocked by Carter, and Toronto called timeout, but couldn't get off a good shot.