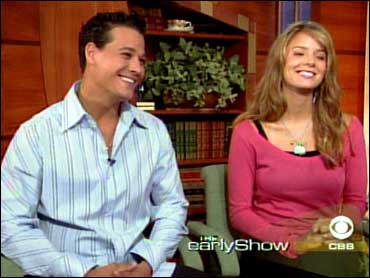 What can we expect from the cast of "Survivor: Vanuatu – Islands of Fire"? Amber Brkich and Rob Mariano, the two top finishers of last season's "Survivor: All-Stars," gave their assessments on The Early Show.

"What a crew," said Rob. "I think (executive producer) Mark Burnett has put together a great cast of good-looking people. My top pick: I'm going for the kid from Boston."

"I like the fact he seemed to have his priorities down," Rob explains. "He seems to know it's a game, as they all said. But he seems to do what it's gonna take to win."

According to Amber, that's the key to winning: To come into the game not to become a TV star but to play.

She explained, "The first time in Australia, it was there. I'm in Australia, happy just to be there. The second time, I could care less where I was. I was there to win the money. My eye never came off the money."

Neither Rob nor Amber are crazy about Lea Masters, the drill sergeant from South Carolina, mainly because they feel he will not be able to let go of the whole "drill sergeant" persona.

"If you're going to be brutally honest, you have to do it only to the cameras," explained Rob. "You can't be out doing it in the open, because sooner or later, they'll catch on."

Added Amber, "You can't be too bossy out there. The bossy ones seem to get voted out quickly."

Rob and Amber are still thinking about a date for their wedding, and there's "a big possibility" that it will be televised.