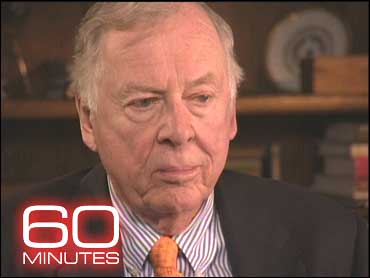 If you've been watching television lately, chances are you've seen a white-haired Texas oil man promising he can save America from foreign oil by using wind power, solar energy and domestic natural gas. He's T. Boone Pickens, and he's playing the role of pioneer and provocateur, in a massive national campaign warning of an energy crisis as dire as the current financial one.

As 60 Minutes contributor Charlie Rose reports, Pickens says he has a solution - a plan that might sound unrealistic in the current economic climate - but one he hopes will be good for the country and good for Boone Pickens.

At 80 years old, T. Boone Pickens acts like a man in the prime of his life, and there's no better place to see that than at Oklahoma State University. He has given his alma mater about $350 million, turned around the school's football team and rebuilt its stadium.

And that has made him a very big man on campus.

But can this billionaire, who has helped his alma mater so much, help break America's addiction to foreign oil?

"It seems to me that Boone Pickens is a guy that needs an idea and a challenge. He almost needs to be at war all the time," Rose comments.

"I know it. They call 'em crusades. I mean, I've been accused, 'You're a crusader, Pickens,'" he says. "I said, 'I don't start out that way.' But I'll have to admit that sometimes it ends up kinda like a crusade."

Pickens is spending $58 million of his own money to promote his biggest crusade yet, and probably the biggest of its kind. He calls it the "Pickens Plan."

The essence of his plan is to reduce oil imports by 30 percent in ten years, and save the country hundreds of billions of dollars. Pickens is an oil man who believes the era of oil is over, and that there's enough natural gas in this country to take its place in millions of cars and trucks.

"We own it. And it's abundant and it's cheap. It's cheaper than the oil. And whatever we spend here for energy at home creates jobs, taxes and the economy goes…," Pickens says.

He believes this would stimulate the economy. "We can do so much here at home with the money here, instead of letting it go out of the country."

The Pickens Plan, which could be overly ambitious in this financial crisis, calls for a conversion from oil products to natural gas in vehicles, first by phasing in two million new heavy trucks - roughly the entire fleet of big rigs that move goods around the country. Trucks account for about a quarter of the amount of oil we import every year.

"If you don't buy into natural gas, you're not buying into the Pickens Plan as a bridge to the future?" Rose asks.

"Anybody, whether it's Sarah Palin or George Bush or John McCain, who thinks you can drill your way out of the problem, is?" Rose asks.

"You don't have a chance. There's no way. We're importing 12 million barrels of oil a day. Okay, let's just say that we were gonna replace 12 million barrels by drilling in America. We would be bigger than Saudi Arabia. We are stretched for everything. I mean, we are a marginal producer," Pickens says.

Asked if he thinks his plan is the last, best hope for America to get off its addiction to foreign oil, Pickens tells Rose, "It's the only plan."

Pickens says his father told him, "A fool with a plan can beat a genius with no plan."

In order for his plan to work, Pickens proposes replacing the natural gas that's now used to generate 22 percent of the nation's electricity with a new source of power: wind power, created by thousands of wind farms that would need to be built.

"How do you know the utilities are gonna take wind power as a substitute for natural gas?" Pickens asks. "That may be a mandate."

"So that's a critical point. You may have to have the government demand this happen," Rose says. "Speak to that. Suppose it doesn't work? Suppose the Pickens Plan doesn't happen? What happens to the country?"

"Well, the plan then is foreign oil. You're totally at the mercy of foreign oil. There's no option one, two, three," Pickens says.

But it's not at all simple. It would be a massive undertaking, requiring more than $500 billion of private investment in wind power and $150 billion in government subsidies. And Pickens wants the next president and Congress to remake the nation's electrical grid by declaring emergency eminent domain to run new transmission lines through private land across the country.

That kind of urgent action hasn't been taken since President Eisenhower commissioned the Interstate highways to move military equipment during the Cold War.

"This needs to be identified as an emergency is what it is. It's a crisis. We're at war with no guns in this one," Pickens says.

And Pickens is right where he wants to be when he makes a deal: on the front lines and poised to make a profit, which could happen if his plan takes off, and the demand for wind power and natural gas eventually soars. The energy hedge fund he now runs, BP Capital, invests in natural gas securities.

He's the founder and major shareholder in Clean Energy Fuels, the largest natural gas vehicle fueling company in the country. And Pickens has already spent $2 billion of what he hopes will be $10 billion to build an enormous wind farm near the far edge of his 68,000-acre ranch in the Texas panhandle.

That's risky in and of itself, since wind power is still in its infancy, and the financial markets are tight.

He says these turbines could create enough energy to service 1.3 million homes. "So, it's big. It would be the biggest wind farm in the world, today," he says.

Where's the risk in this?

"Well, the risk is just like the risk we just experienced in the last thirty days. I mean, if the financial markets fell apart. I mean, you could be left holding the bag, in that deal. And, you know, you won't be able to finish the project or something. That's the concern I have," Pickens says.

"What do you mean don't talk about Boone? Boone thinks about Boone," Rose continues.

"I sure as hell don't want to lose, I'll tell you that, but getting rich for me isn't really that big a deal. You know, in the last five years, I have given away $700 million, and so, I don't need any more money. My standard of living is about as good as it can get," Boone says.

Whatever the motive, Pickens knows he has to sell his plan to the public and to politicians. So he's been barnstorming the country in his $45 million private jet, preaching his gospel to packed town hall meetings.

Boone says he's been a running national campaign that's at presidential level, crisscrossing the country to speak to groups.

And the presidential candidates have been listening closely.

"I've paid attention to one of the, some of the Boone Pickens commercials that you've seen," McCain said at a town hall meeting.

And they've been using some of Pickens' best lines.

"Even Texas oil man Boone Pickens has said this is one emergency we can't drill our way out of," Obama said in a speech.

A life-long Republican, Pickens' candidate this election is his Pickens Plan. And in August, 60 Minutes found him venturing into unfamiliar territory: the Democratic National Convention.

Asked what he was doing there, Pickens told Rose, "I'm here, honestly, what I'm here for, I'm here for America. My cause is a bipartisan, non-partisan cause."

But it didn't take long for the new non-partisan Boone Pickens to have a visibly uncomfortable encounter with his partisan past - Senator John Kerry, whose presidential campaign Pickens helped destroy four years ago when he gave money for the infamous and widely criticized "Swift Boat "ads that attacked the senator's service in Vietnam and his later testimony before Congress.

"You spent $3 million funding an advertising campaign that, in some people's mind, was representative of dirty politics, smear politics, character assassination, all of that. At this stage, do you have any regrets?" Rose asks.

Asked if he'd do it over again tomorrow, Pickens says, "What I knew then, I know that same thing now. And nothing has changed my mind."

Surprisingly, that hasn't stopped some of the country's leading Democrats, like Senate Majority Leader Harry Reid, from embracing him and his ideas.

T. Boone Pickens grew up as an only child in Holdenville, Okla., during the Great Depression.

60 Minutes didn't have to go to Oklahoma to see his childhood home - it was moved board by board right to his Texas ranch.

At age 12, Thomas Boone Pickens was a paper boy with the smallest route in town. He orchestrated his first merger and acquisition when he talked his boss into letting him take over four rival routes.

Pickens says he didn't have any idea at the time he was headed for a business career. "I knew I was gonna make some money sometime," he says.

"And how did that turn out?" Rose asks.

"I just didn't know how much money I was gonna make. It turned out pretty good!" Pickens admits.

He made his first big money searching for oil, and built Mesa Petroleum, one of the most successful independent oil and natural gas companies in the country. He attributes his success to being relentlessly competitive.

Pickens took his hunt for oil to Wall Street in the 1980s, as one of the original corporate raiders, earning hundreds of millions of dollars for himself and shareholders of the companies he tried to take over.

But he went through a long dry spell after that - until he hit his 70s, and came back bigger than ever with a new company and a new love: his fourth wife, a wealthy heiress named Madeleine Paulson. They've created a sanctuary for themselves at their Texas ranch, but that hasn't insulated them from the current financial crisis. Pickens is getting battered by it.

The steep drop in oil and gas prices since July has cut the value of Pickens' hedge fund in half. Among those who've suffered: his alma mater, OSU, which has lost about $100 million of investments the school made with money Pickens had donated and then managed in his hedge fund. Overall, Pickens and BP Capital are down a staggering $2 billion.

And there it is: the credo this oil man has lived by all his life: if one hole is dry, the next one is bound to be a gusher. And that's what he hopes his Pickens Plan will become.

"You're 80 years old. Does it give you any hesitancy? I mean, in other words it puts you in a race against time," Rose comments.

"We're absolutely in a race against time. That's where I am. I've got to make it happen fast," Pickens says.

"So you've got a real sense of urgency," Rose asks.