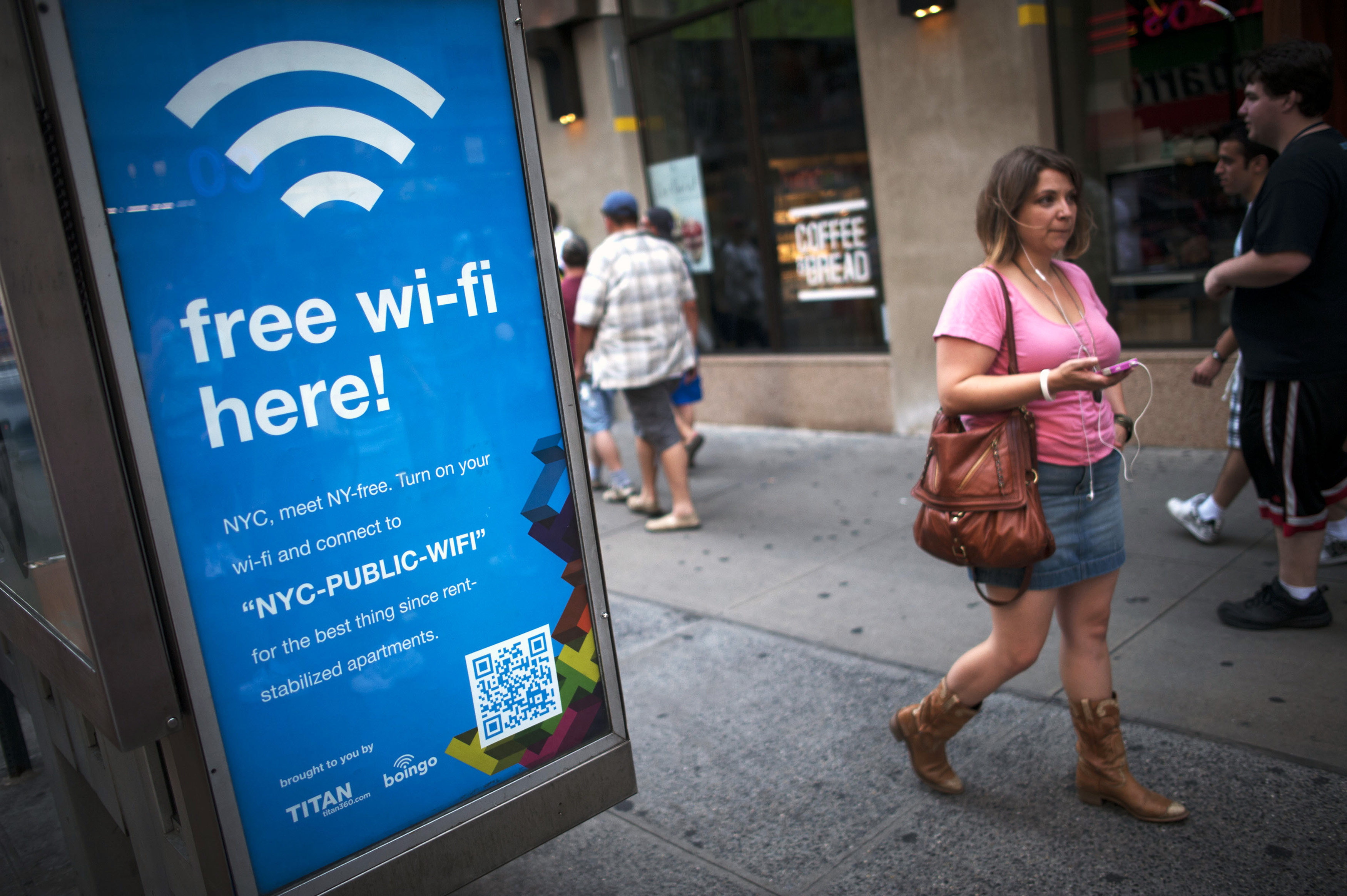 NEW YORK -- Operator, won't you help me replace this call?

A 9-foot-tall, narrow structure installed this past week on a Manhattan sidewalk is signaling a plan to turn payphones into what's billed as the world's biggest and fastest municipal Wi-Fi network.

The first of at least 7,500 planned hotspots are due to go online early next year, promising superfast and free Wi-Fi service, new street phones with free calling, ports to charge personal phones and a no-cost windfall for the city.

For now, the first hotspot is still being tested and sits under a gray cover. But some passers-by like the sound of what's in store.

"It's always helpful" to have Wi-Fi to reduce the bite that apps and web-surfing take out of cellular data service, which is capped in many consumers' plans, Jack Thomas said this week while texting near the dormant kiosk.

But others have qualms about New Yorkers linking their devices to a public network as they stroll down the street, though the city has said data will be encrypted and any information harvested for advertising will be anonymized.

"I think it makes us all more vulnerable to wrongdoers," Bee Mosca said as she eyed the future hot spot.

Payphones may seem like telecom relics when 68 percent of Americans own smartphones, according to the Pew Research Center on Internet, Science & Technology. But about 8,200 payphones still dot New York streets.

Some were pressed into service amid outages after 2012's Superstorm Sandy, but their numbers and usage have declined overall, and 37 percent of those inspected last year were inoperable.

The city experimented with providing Wi-Fi from a few payphones in 2012, then hatched the current, eight-year "LinkNYC" plan.

A consortium of companies, including wireless technology player Qualcomm Inc., is to pay the estimated $200 million installation cost and take half the revenue from the kiosks' digital advertising, projected at $1 billion over 12 years. The city gets the other half, more than doubling the $17 million a year it gets from payphones now.

Each hotspot covers about a 150-foot radius with what's pledged as one-gigabit-per-second service, about 20 times the speed of average home Internet service. Officials have said the service is intended for outdoor use; it's not clear whether it might extend inside some businesses and homes.

Though many Americans now carry Internet connectivity in their pockets, the network "can be a win for users who can save on their data plans, and it can be a win for (cellular) networks if they're really overtaxed," said Erik Stallman, general counsel of the Center for Democracy and Technology, a group that advocates for Internet liberties and access.

LinkNYC isn't without opponents: A payphone company has sued the city, saying it created a monopoly for the new consortium. The city has said it believes the arrangement is legal.

Many U.S. cities strove to cover themselves in Wi-Fi in the early 2000s. But a number of the plans foundered as home access proliferated, usage and ad revenues disappointed and some Internet service providers complained the city networks were unfair competitors.

But some cities have recently recast and reinvigorated their efforts. Boston is working to expand a "Wicked Free WiFi" network with over 170 hotspots, and Los Angeles is encouraging private companies to provide free basic wireless to all homes and businesses, with outdoor coverage as a goal.

Still, some question whether it's wise for city governments to get into offering Wi-Fi, rather than leaving it to businesses.

But "New York is not a typical city," said Jeff Kagan, a telecommunications analyst and consultant.