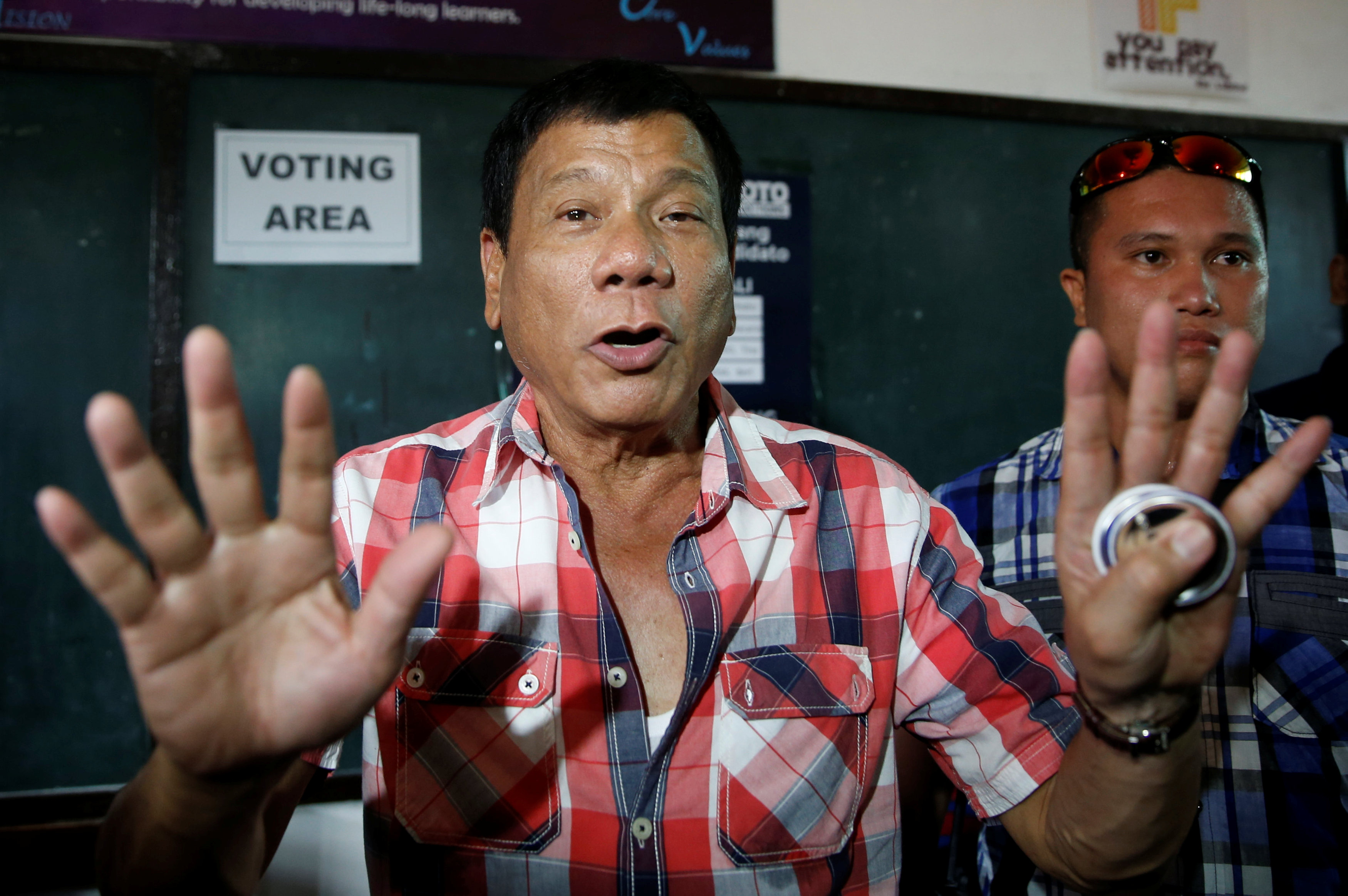 MANILA, Philippines -- Millions of Filipinos lined up Monday in blazing heat to vote for a president that opinion polls show will likely be a foul-mouthed mayor who gained huge popularity with his pledges to kill criminals and end corruption within six months.

Weary of poverty, corruption and insurgencies in the hinterlands, voters are looking for a radical change at the top, and hope the man to lead it is Rodrigo Duterte, the 71-year-old mayor of the southern Davao city.

An ex-prosecutor, Duterte has peppered his campaign speeches with boasts about his Viagra-fueled sexual prowess and jokes about rape. But Duterte has successfully tapped into discontent and voters appear willing to overlook his foul language.

"All of you who are into drugs, you sons of bitches, I will really kill you," Duterte told a huge cheering crowd Saturday in his final campaign rally in Manila. "I have no patience, I have no middle ground, either you kill me or I will kill you idiots."

The brash Duterte, who has been compared to U.S. Republican presumptive nominee Donald Trump, has threatened to close down Congress and form a revolutionary government if legislators stonewall his government.

Besides Duterte, former Interior Secretary Mar Roxas, backed by Aquino, and three other candidates are vying to lead one of Asia's liveliest democracies. More than 45,000 candidates are contesting 18,000 national, congressional and local positions in elections that have traditionally been tainted by violence and accusations of cheating, especially in far-flung rural areas. The results are not expected for at least 24 hours, perhaps longer.

At least 15 people have been killed in elections-related violence and more than 4,000 arrested for violating a gun ban, according to police.

"Let us show the world that despite our deep passion and support for our candidates, we can hold elections that are peaceful and orderly and reflect the spirit of democracy," said Aquino, who cast his ballot after standing in line for more than an hour with other voters in a Manila constituency.

Commission on Elections Chairman Andres Bautista said no major glitches were expected in the voting despite the massive logistical challenges. About 55 million Filipinos have registered to vote in 36,000 voting centers across the archipelago of more than 7,100 islands, including in a small fishing village in a Philippine-occupied island in the disputed South China Sea.

In final campaigning Saturday, Aquino warned voters that Duterte could be a dictator in the making and urged them not to support him. He cited the rise of Nazi leader Adolf Hitler as an example of how a despotic leader can gain power and hold on to it without public resistance.

Filipinos have been hypersensitive to potential threats to democracy since they rose in a 1986 "people power" revolt that ousted dictator Ferdinand Marcos, who faced allegations of plundering the poor country and condoning widespread human rights violations by state forces. In 2001, a similar uprising forced Joseph Estrada from the presidency over alleged large-scale corruption.

On the campaign trail, Duterte offered radical promises, including his bold anti-crime pledge and a plan to sail to China's new artificial islands in the disputed South China Sea and plant the Philippine flag there. The other candidates stuck to less audacious reforms.

Duterte's opponents - Roxas, Sen. Grace Poe, Vice President Jejomar Binay and Sen. Miriam Defensor-Santiago - have all criticized him for remarks that threaten the rule of law and the Philippines' hard-won democracy.

"Duterte is completely out of the system, he's out of the box," said political science Prof. Richard Heydarian of De La Salle University in Manila, adding that in the mayor's portrayal of social problems, "there is a gap between the rhetoric and reality but it's working, it's creating panic among a lot of people and rallying them behind Duterte."

Duterte built a political name with his iron-fist approach to fighting crime in Davao city, where he has served as mayor for 22 years. During the campaigning he joked about wanting to be the one to first rape an Australian missionary who was sexually abused and killed by inmates in a 1989 prison riot.

Despite his devil-may-care way with expletives, obscene remarks and allegations of corruption hurled against him, Duterte has led in election polls by more than 10 percentage points over Roxas and Poe. While it may be difficult for rivals to catch up, analysts say the race remains too close to call.

Aquino had a mixed record during his six-year term that ends in June. He presided over an accelerating economy, which had recorded one of the highest growth rates in Asia at an average of 6.2 percent between 2010 and 2015. He also introduced new taxes, more accountability and reforms, including in the judiciary, and cracked down on tax evaders.

But more than a quarter of the country's 100 million people remain mired in poverty, inequality is rampant and an immediate solution to decades-long Muslim and communist insurgencies in the south remains elusive.