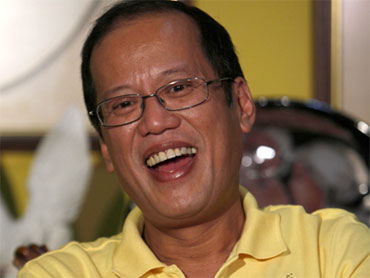 This story was filed by CBS News' Barnaby Lo in Manila.

It's official. Benigno "Noynoy" Aquino III, the only son of martyred opposition Sen. Benigno Aquino Jr. and former President Corazon Aquino, is the Philippines' next president.

Almost a month after the country's first automated national election, Congress has finished canvassing votes and is set to proclaim the new president and vice-president tomorrow. Aquino beat his closest rival, ousted President Joseph Estrada, by more than 5 million votes. On the other hand, Jejomar Binay, a close friend of the Aquino family and mayor of Manila's financial district, led by only 700,000 votes in one of the most hotly contested vice-presidential races.

But while the vice-presidential race remained a toss-up between Binay and Aquino's running mate, Sen. Manuel Roxas II, until today, Aquino has held a lead convincing enough to be considered president-elect since a few days after the May 10 election. Though careful not to claim victory, Aquino has started assembling his cabinet and is working with the current administration for a smooth transition.

Aquino comes from one of Asia's most prominent political families, but until the death of his mother in August last year, he says he never planned to run for presidency. With the clamor for him to lead the country growing day after day, he spent a few days at a convent to ask for "God's guidance."

"At the end of the day (I thought) I would not be able to live with myself... if, knowing that I could have done something, I chose not to and the situation became worse," he said in an interview with the AFP news agency.

Critics and political opponents constantly hit him for his lackluster performance as a three-term congressman and senator, but Aquino banked on his family name, a clean public image, and a strong anti-corruption message. Everywhere he went, people came out by the thousands. Yellow ribbons, which were a symbol of the mass protests after the assassination of Aquino's father, were everywhere -- on cars, trees, street posts, and houses.

During the campaign and after the election he became one of the harshest critics of President Gloria Macapagal-Arroyo, whose nine years in office have been hounded by allegations of graft and corruption. He has pledged to create a commission that will look into these allegations. He will also have to deal with communist and Muslim insurgents, significant social unrest, and an unstable political environment.

"The problems I will be inheriting are still growing to this very day and, perhaps, to the last day," Aquino told reporters on Monday, acknowledging the public's high expectations.

Under President Arroyo, the Philippines experienced modest economic growth, and in fact was relatively unaffected by the global economic downturn. But her failure to curb corruption, and her involvement in several corruption scandals herself, left her with the worst approval ratings of any Philippine president.

Aquino is generally trusted to be able to make good on his promise to eradicate corruption. Civil society, business organizations, and religious groups are behind him. Former Arroyo cabinet members, who resigned after the alleged poll fraud committed by Arroyo, have also come out to support him. But some worry that the same old faces; family and friends, will dominate his administration.

Amidst electoral protests over Binay's win in the vice-presidential race, Congress will proclaim Aquino and Binay as the country's top leaders tomorrow, and on June 30, a new administration will be ushered in.

Aquino, 50, will be the first bachelor to sit as the country's president. Rumors of a presidential palace wedding abound, but Aquino and his girlfriend, Shalani Soledad, a councilor from a Manila suburb, have both denied the reports.