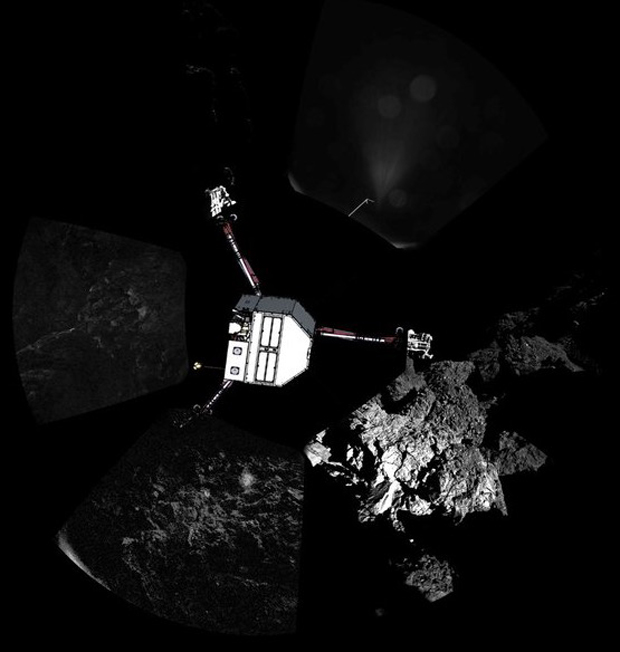 The European Space Agency's Philae comet lander, out of power and presumably lost after bouncing into heavily shadowed terrain last November, phoned home Saturday after finally getting enough sunlight on its solar panels to transmit data to the Rosetta orbiter for relay to Earth, ESA reported Sunday.

More than 300 data packets were received at the German Aerospace Center (DLR) in a burst lasting 85 seconds, the first sign of life from the lander since it went into electronic hibernation Nov. 15, about 60 hours after touchdown.

The data were relayed to Earth by ESA's Rosetta orbiter, which released Philae more than three months after matching orbits with Comet 67P/Churyumov-Gerasimenko last August.

"Philae is doing very well," project manager Stephan Ulamec said in an ESA blog post. "It has an operating temperature of -35 (degrees Celsius) and has 24 watts available. The lander is ready for operations."

Philae was designed to fire harpoons into the comet's crust at the moment of touchdown to help secure it in the feeble gravity. It also was equipped with ice screws on its landing legs to help hold it down. But the systems failed to operate properly and Philae bounced across the surface, coming to rest in heavily shadowed terrain amid cliffs and piles of debris.

The lander dutifully beamed back data about its surroundings and a handful of pictures that indicated it may have ended up on its side. Whatever its orientation, its solar panels were mostly shadowed, and the lander's batteries quickly drained.

When it finally fell silent, engineers said they were hopeful that as 67P/Churyumov-Gerasimenko moved closer to the sun, the lighting conditions at the landing site would improve, possibly allowing enough sunlight to fall on one or two solar panels to charge up its depleted battery.

Engineers still do not know where, exactly, Philae ended up, but Rosetta has identified several candidate landing sites that will be inspected in more detail in the days ahead.

Jean-Pierre Bibring, the lead lander scientist, was optimistic from the start that Philae eventually would get enough sunlight to come out of hibernation.

"I think within the team there is no doubt that we will wake up," he told reporters last year at the American Geophysical Union's Fall meeting in San Francisco. "And the question is OK, in what shape? My suspicion is we'll be in good shape."

The lander faced two major issues. Without power, and with most of the spacecraft in shadow, extreme cold could damage internal systems. And without a minimum amount of solar power, Philae's battery would be unable to charge and its computer system would not be able to reboot.

"For the electricity, we need to have solar panels with a few watts, typically 5 watts, which is sufficient to reboot the system," Bibring said. "If we want to do (science) we need to have another 5 or 7 watts. ... It really depends on how the sun will go over the local horizon. The total energy we need is something like 15 watts, which is less than what you have in your fridge (light)."

Based on the data received Saturday, Philae apparently has more than enough power to function and continue science observations. Analysis of the data indicates the lander actually woke up earlier, but was unable to reach Rosetta.

"Now the scientists are waiting for the next contact," ESA said in a Rosetta blog post. "There are still more than 8,000 data packets in Philae's mass memory, which will give the DLR team information on what happened to the lander in the past few days on Comet 67P/Churyumov-Gerasimenko."

Rosetta and Philae began their 10-year 3.7-billion-mile odyssey on March 2, 2004, boosted into space by an Ariane 5 rocket. To reach 67P/Churyumov-Gerasimenko, the spacecraft had to carry out four planetary flybys, repeatedly using the gravity of Earth and Mars to boost its velocity enough to move out into deep space.

Finally, on Aug. 6 last year, the spacecraft matched orbits with 67P/Churyumov-Gerasimenko to begin a year-and-a-half of close-range observations. Then, on Nov. 12, the Philae lander was released.

The lander was equipped with two downward-firing harpoons and ice screws on its three landing legs designed to hold the craft down in the comet's low gravity.

But the harpoons failed to fire, the ice screws did not engage and Philae bounced off the surface, soaring through a huge arc before coming back down again two hours later. The lander then bounced away again, finally coming to rest lodged in rocks and apparently on its side.

Frames from a panorama taken after it came to rest revealed a nearby cliff and a chaotic jumble of dark rock-like debris casting long shadows and allowing only minimal sunlight to reach Philae's solar cells.

Restoring contact with Philae gives the already successful Rosetta mission a welcome boost. ESA promises "more information when we have it!"