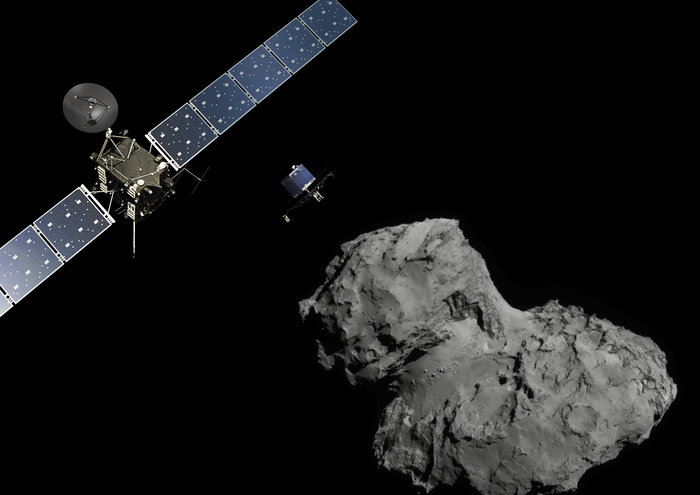 Following a precisely plotted trajectory just 14 miles from a slowly tumbling comet, the European Space Agency's Rosetta probe released a small lander early Wednesday for a seven-hour descent to a boulder-strewn surface, the first attempt ever made to land on a frozen remnant of the solar system's birth.

The health of an upward-pointing thruster designed to fire at the moment of touchdown to help prevent the Philae lander from rebounding in the comet's feeble gravity could not be confirmed during final checkout late Tuesday, but mission managers decided to press ahead with the launch anyway, relying on landing leg ice screws and two harpoons to penetrate the frigid soil and lock the spacecraft down.

"The cold gas thruster on top of the lander does not appear to be working so we will have to rely fully on the harpoons at touchdown," Stephen Ulamec, Philae lander manager at the DLR German Aerospace Center, said in a statement. "We'll need some luck not to land on a boulder or a steep slope."

Philae was released from Rosetta on schedule at 3:35 a.m. EST (GMT-5). At a distance of 317 million miles from Earth, it took 28 minutes for radio signals confirming separation to reach anxious flight controllers at the European Space Operations Center in Darmstadt, Germany.

"We've been living and flying together for 10 years," said an obviously relieved Andrea Accomazzo, Rosetta spacecraft operations manager. "Now, Philae is on its path down to the comet. We see it in the telemetry."

If all goes well, the lander, moving at a normal walking pace, will hit the surface of Comet 67P/Churyumov-Gerasimenko at 10:34 a.m., somewhere within a 1,600-foot-wide landing zone. In a gravity field 100,000 times weaker than Earth's, the ice screws on the lander's three legs were expected to penetrate the cold, dusty surface to help prevent the spacecraft from bouncing back into space.

The two downward firing harpoons were designed to provide a firmer grip using the cold gas thruster to offset the impulse of their release. Commands were uplinked to pressurize the thruster system overnight Tuesday, but a sensor that has not been tested since launch in 2004 did not show any change. It was not immediately known whether the sensor was to blame or whether the thruster was, in fact, down for the count.

Losing the thruster "will make the landing even more challenging now because we cannot operate this pressure on the surface to avoid the re-bounce," Ulamec told reporters. "We have to fully rely now on the harpoons."

During a media update Tuesday, Mark McCaughrean, senior advisor with ESA's Directorate of Science and Robotic Exploration, said the landing entailed considerable risk even if everything was working perfectly.

"You won't gain anything without taking risk. exploration is all about going to the limits, exploring the envelope," he said. "We've been past comets before, but nobody's ever actually dared to stop next to one, orbit around it, and of course naturally, you're going to want to land on it.

"But we know how difficult that is. Everybody's nervous, everybody's on tenterhooks, but we know the risk is worth taking, the rewards are enormous. But we also know we have a mission which is working fantastically and that we'll go into 2015 in great shape to do brilliant science next year as the comet lights up as it gets closer to the sun."

Philae's touchdown, he said, is "part of a fantastic mission" that will continue regardless of the lander's success or failure.

Tipping the scales at just 220 pounds, Philae is equipped with 10 sophisticated instruments and cameras designed to document the spacecraft's approach to the nucleus and collect data about the immediate environment.

Once anchored to the surface, a 360-degree 3D panorama will give scientists a detailed look at the landing site, along with microscope views of the soil directly beneath the lander. A drill will penetrate a foot below the surface to collect pristine material for chemical analysis.

But a major unknown was the nature of the landing site. Comet 67P/Churyumov-Gerasimenko is a much more challenging body than anyone anticipated when Rosetta was launched in 2004. Pictures taken during Rosetta's approach earlier this year revealed a bizarre nucleus with two bulging lobes connected by a thin neck with steep 500-foot-high cliffs, boulder fields and generally rough terrain.

Philae was not equipped with maneuvering thrusters or any sort of active hazard avoidance system. Flight planners chose the most benign landing site they could find, but there were no guarantees that Philae would avoid landing on a boulder or a steep slope that might prevent a successful touchdown.

Like all comets, 67P/Churyumov-Gerasimenko is a frozen remnant of the primordial material used to form the sun and planets 4.6 billion years ago.