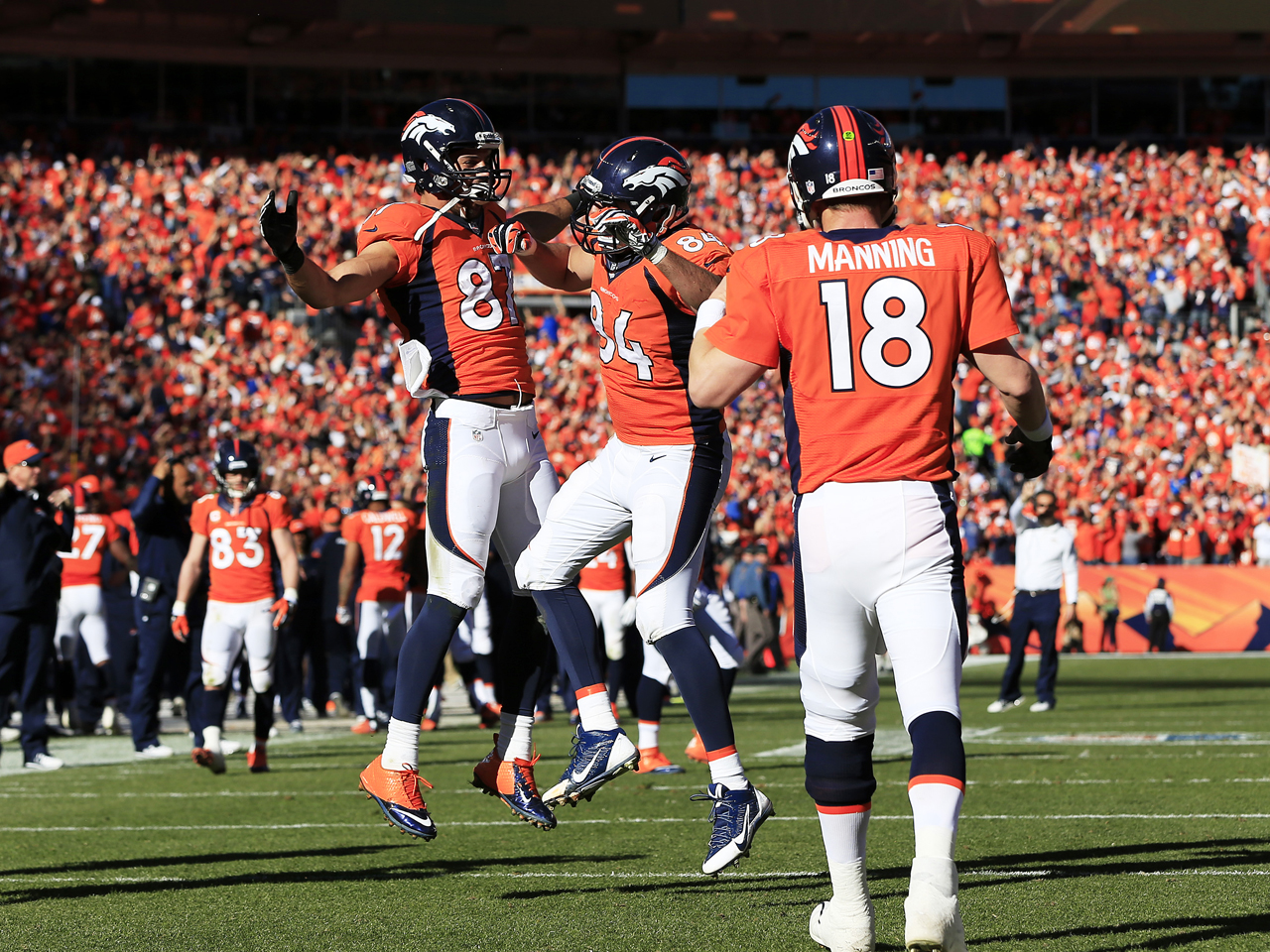 DENVER - Peyton Manning had an answer for everyone. What's new?

For Tom Brady. For the New England defense. For anyone who thought he couldn't win the big one.

Manning is taking the Denver Broncos on a trip to New York for the Super Bowl after another of his impeccably crafted victories - this time, a 26-16 win over the Patriots on Sunday in the AFC title game.

Less than three years after being unable to throw a football because of his surgically ravaged neck and nerve endings, Manning will get a chance for his second ring. He'll try to become the first quarterback to win one with two different teams, at the Meadowlands on Feb. 2 against Seattle or San Francisco, who play later Sunday for the NFC championship.

After taking the final knee, Manning stuffed the football in his helmet and ran to the 30-yard line to shake hands with Brady. The Indy-turned-Denver quarterback improved to 5-10 lifetime against New England's QB but 2-1 in AFC title games.

It was far from a fireworks show in this, the 15th installment of the NFL's two best quarterbacks of their generation. But Manning, who finished 32 for 43 for 400 yards and two short touchdown passes, set up four field goals by Matt Prater and put his stamp on this one with a pair of long, meticulous and mistake-free touchdown drives in which nothing came cheap.

Manning geared down the no-huddle, hurry-up offense that helped him set records for touchdown passes and yardage this season and made the Broncos the highest-scoring team in history. The result: A pair of scoring drives that lasted a few seconds over seven minutes; they were the two longest, time-wise, of the season for the Broncos (15-3).

Manning capped the second with a 3-yard pass to Demaryius Thomas - who got inside the overmatched Alfonzo Dennard and left his feet to make the catch - for a 20-3 lead midway through the third quarter.

From there, it was catch-up time for Brady and the Pats, and they are not built for that.

A team that averaged more than 200 yards on the ground the last three weeks didn't have much quick-strike capability. Brady, who threw for most of his 277 yards in comeback mode, actually led the Patriots to a pair of fourth-quarter touchdowns. But they were a pair of time-consuming, 80-yard drives. The second cut the deficit to 26-16 with 3:07 left, but the Broncos stopped Shane Vereen on the 2-point conversion and the celebration was on in Denver.

The trip to New York, where it figures to be at least a tad cooler than Sunday's 63-degree reading at kickoff, will come 15 years after John Elway rode off into the sunset with his second straight Super Bowl victory.

The Broncos have had one close call since - when they lost at home to Pittsburgh in the 2005 title game - but what it really took was Elway's return to the franchise in 2011. He slammed the door on the Tim Tebow experiment and signed Manning to a contract, knowing there were risks involved in bringing to town a thirtysomething quarterback coming off multiple operations to resurrect his career.

Even without Von Miller on the field, Elway put enough pieces in place around Manning to contend for a championship.

And Manning knows how to make the most of them.

This game started getting out of hand at about the same time Patriots cornerback Aqib Talib went out with a knee injury. Nobody else could cover Thomas and Manning, who finds mismatches even under the toughest of circumstances, found this one quickly.

Thomas finished with seven catches for 134 yards, including receptions of 26 and 27 yards that set up a field goal for a 13-3 lead before the half.

Denver got the ball back to start the third quarter - working the plan to perfection after winning the coin toss and deferring the choice - and Manning hit Thomas for 15 and 4 yards as part of the 80-yard, 7:08 touchdown drive that gave Denver the 17-point lead.

The thought this week was that the Patriots were playing with house money, having well exceeded expectations for a team that lost a number of stars - Aaron Hernandez, Wes Welker, Rob Gronkowski - and has been plagued by injuries all year.

But a loss is a loss and facts are facts. Bill Belichick is stuck on three titles and hasn't won one since the NFL busted him for the Spygate videotaping scandal.

The Broncos, meanwhile, got over a big hump last week by beating the Chargers in the divisional round, which is where last year's trip fizzled unexpectedly against Baltimore.

Manning insisted the showdown against Brady was more Broncos vs. Patriots than Manning vs. Brady. He lets others decide who's the greatest at this or that.

But he earned a chance to improve on his already-sterling legacy, one that figures to include a fifth MVP award come Super Bowl week.

A win at MetLife Stadium would put him in the same company as his brother, Eli, along with Elway, Roger Staubach and others as a two-time Super Bowl winner.