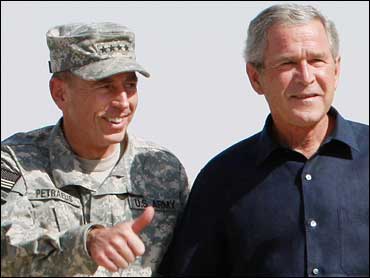 President Bush's top two military and political advisers on Iraq will warn Congress on Monday that making any significant changes to the current war strategy will jeopardize the limited security and political progress made so far, The Associated Press has learned.

U.S. Ambassador Ryan Crocker, who has been less forthcoming than Gen. David Petraeus in advance of his testimony, will join Petraeus in pushing for maintaining the U.S. troop surge, seeing it as the only viable option to prevent Iraq and the region from plunging into further chaos, U.S. officials said.

Crocker and Petraeus planned to meet on Sunday to go over their remarks and responses to expected tough questioning from lawmakers - including skeptical Republicans. But they will not consult Mr. Bush or their immediate bosses before their appearances Monday and Tuesday, in order to preserve the "independence and the integrity of their testimony," said one official.

Petraeus and Crocker did have lengthy discussions with the president, Defense Secretary Robert Gates and Secretary of State Condoleezza Rice when Mr. Bush visited Iraq on Labor Day.

Crocker, a career diplomat with extensive experience in the Middle East who opposed the war when it began in 2003, is pushing for political change where progress has been elusive and the administration's options are limited under the fragile Shiite-led government of Prime Minister Nouri al-Maliki.

Yet the diplomat will say that as poorly as al-Maliki's government has performed, it would not be advisable at the moment for the U.S. to support new leadership or lobby for a different coalition of Iraq's fractious Shiites, Sunnis and Kurds, the officials said.

Crocker also will discuss the challenges of corruption, reconciliation, de-Baathification and the difficulties of enacting wide-ranging legislation such as an oil law, according to officials. They spoke on condition of anonymity because they were discussing internal deliberations.

Both Crocker and Petraeus will say the buildup of 30,000 troops, bringing the current U.S. total to nearly 170,000, has achieved some success and is working better than any previous effort to quell the insurgency and restore stability, according to officials familiar with their thinking.

Petraeus, the commander of U.S. forces in Iraq, and Crocker were in the Washington area on Saturday working separately on final drafts of opening testimony on Capitol Hill. Later in the week, Mr. Bush plans a national address.

The assessments by Petraeus and Crocker are intended to be considered equally. But officials expect Congress to focus on military matters, particularly possible troop withdrawals. Unless there are changes, the increase comes to a natural end starting in the spring and continuing through the end of next summer.

At the same time, officials close to Crocker pointed out that any revisions to the military strategy will have a profound affect on the political side.

"Clearly, the political, economic and diplomatic elements are directly related to what happens with security and our involvement in it," one official said.

The officials disputed suggestions that either Petraeus or Crocker would recommend anything more than a symbolic reduction in troop levels and then only in the spring.

Petraeus offered some insights into his testimony on Friday. In a letter to troops serving in Iraq, he cited "uneven" but quantifiable progress in the security situation and acknowledged that the political side "has not worked out as we had hoped."

"We are, in short, a long way from the goal line, but we do have the ball and we are driving down the field," he wrote. It was perhaps the clearest indication he favors carrying on with the troop increase.

Officials said Crocker is focused on trying to do the best he can with the tools available to him now before completing his tour in Baghdad and retiring. More is at stake for Petraeus because he is believed to have higher ambitions, including possibly elected office.

In their testimony, the two will lay out for Congress the situation on the ground, discuss the merits of possible revisions to Mr. Bush's strategy, including troop drawdowns and a reduction in support for embattled al-Maliki and conclude that such changes are unwise, officials told the AP.

The testimony will set the stage for an announcement by Mr. Bush on how he will proceed in the face of widespread public unhappiness with the war and criticism from congressional Democrats, especially senators seeking the party's 2008 presidential nomination.

Petraeus and Crocker previewed their thoughts to Mr. Bush during his stop in Anbar province last Monday. It is one of several regions where the administration has claimed success with the additional troops, with decisions by local leaders to join with U.S. forces against insurgents, the officials said.

To that end, the presidential advisers will press lawmakers to recognize achievements at the local level and argue that such results will force Iraq's national leaders into action.

But that development is not covered by any of the 18 military and political benchmarks Congress set out for judging the effectiveness when it approved the new policy that was announced by Mr. Bush in January and reached its full strength in July.

In their testimony, Petraeus and Crocker are expected to repeat the assertions made in the White House's July report that progress is being made, official said. A new updated report is due Sept. 15.

They also are expected to make the oft-stated case that an independent report by congressional auditors, who found only three of 18 benchmarks fully met, set unfair standards for judging success, the officials said.