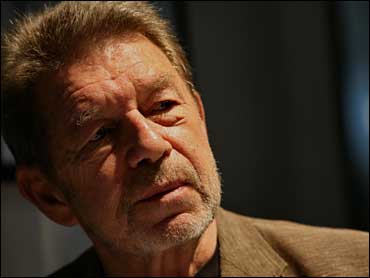 In the midst of writing his best-selling memoir, Pete Hamill reached out to siblings Tom and Kathleen, hoping for the answer to a lingering question from their Brooklyn childhood: In the local candy store, Foppiano's, what exactly was in the racks between the Life Savers and the Hershey Bars?

"It was a big debate, going back and forth, to get it straight," recounts Hamill, laughing at the memory. "Because, I think when the details are straight, it brings the story to life for people who were never there."

Those defining details are intrinsic to Hamill's latest novel, "North River," in which he spins an offbeat New York love story set against the hard times of the Depression and the harsh winds off the waters of the Hudson River on Manhattan's West Side.

Hamill, in his tale, treated the Greenwich Village setting (with its immigrants, indigents and assorted idiosyncrasies) as one of the characters.

"I did," he acknowledges over breakfast inside a midtown Manhattan diner. "And when I say that, I don't mean that there's a monolithic New York. There's no one New York. There's multiple New Yorks. ... Anybody who sits and says, 'I know New York' is from out of town."

Hamill, 72, speaks between bites of an English muffin and sips of black coffee, sunlight splashing from a skylight across a beard long gone gray and a face lined by a lifetime in his hometown. He's the oldest of seven children from Irish immigrants, and setting his novel in 1934 provided a glimpse of his parents' existence.

"Reading about it, what touches me — and by 1940, my father was making $19 a week — was the lack of self-pity," says the author. "You couldn't feel sorry for yourself, which didn't mean some people didn't. But the lack of self pity ..."

It's an attitude reflected in the novel's protagonist, Dr. James Delaney, a World War I veteran with a missing wife, a missing daughter and a grandson who appears on his Horatio Street doorstep one snowy day. Delaney, to Hamill, exemplifies the unsung heroes that populate the city's streets and subways.

"In my experience, growing up in Brooklyn and all that, the real tough guys didn't act tough," Hamill says. "They didn't talk tough. They were tough, you know? I think about these politicians who try to pose as tough guys — it makes me laugh.

"Imagine walking down the street in Brooklyn and meeting Dick Cheney. Would you cross the street?" Hamill launched his career with the New York Post in 1960, and rarely stopped writing since. He worked as a columnist with the Post, the Daily News and New York Newsday. Mingled with his reporting from around the city and the globe were 10 novels, two short story collections, movie and television scripts.

"Pete is the authentic voice of working-class New York," says fellow Irish-American author Peter Quinn. "Combining Irish eloquence with Brooklyn realism, he's served as a voice for immigrants of all colors and a conscience for the entire city."

Hamill's 1994 memoir, "A Drinking Life," landed on The New York Times list of best sellers for 13 weeks. And though that book, too, dealt with New York past, Hamill is fast to say that he's a fan of the city's 21st-century incarnation.

"I know it's a cliché, but I kind of like this era now," he says. "It's like certain things that are not resolved are on their way to being resolved. Race — it's not as bitter as it once was."

"Part of my head will always be in the years after World War II — the five years before Korea started," Hamill says. "I was 10 — from age 10 to 15. It was a great big wonderful town. I saw my first Broadway show when I was 11, to see 'Hamlet.' And I had no idea what ... they were talking about. But I knew it was tremendous."

What Hamill can't remember he's quick to research — hence the family discussion over Brooklyn candy store displays from a half-century ago.

"You've got to be very accurate," he explains. "You can't have the Henry Steele Commager (history book) on your desk to the left and type it in. You've got to let it marinate, so that it becomes memory."

And if memory fails, there's always someone to remind you. Hamill recalls bumping into an old friend at a book-signing for his 1997 novel, "Snow in August." The book's setting was Brooklyn circa 1947; the signing was, appropriately, held at the New York Historical Society.

"And the pool room was on the wrong side of the street."