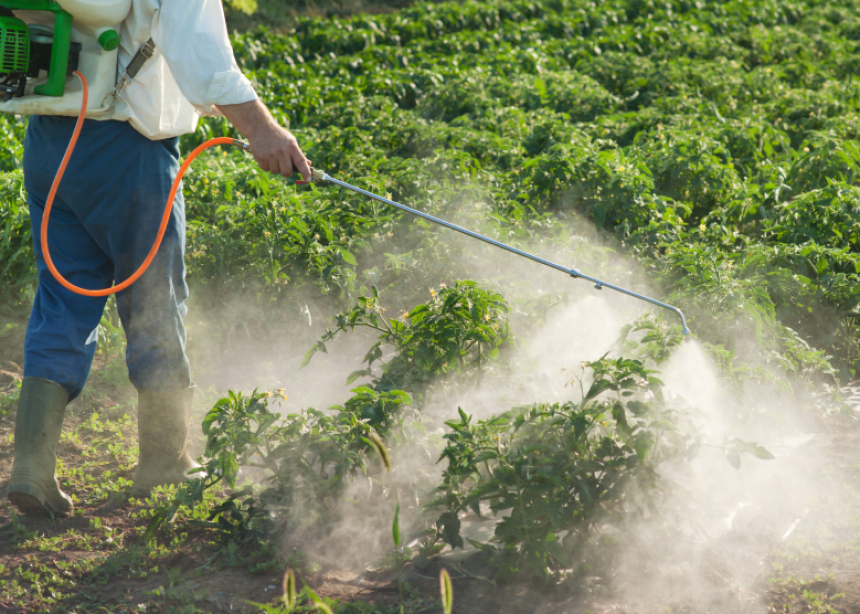 Pregnant women who live within a mile of spaces where commercial pesticides are applied appear to have an increased risk of having a child with autism, a new study suggests.

The risk that a child would develop autism appeared to be highest for women who lived near farms, golf courses and other public spaces that were treated with pesticides during the last three months of their pregnancies.

"Many of these compounds work on neurons. When they work on the insect, they're dealing with the nervous system of the insect and basically incapacitating it," said study author Irva Hertz-Picciotto, an environmental epidemiologist at the MIND Institute at University of California, Davis.

In adults, the brain is protected from many chemical exposures thanks to special filters that prevent many substances from crossing from the blood into the brain.

Hertz-Picciotto says that in young children, this blood-brain barrier isn't fully formed, which may allow pesticides to reach vulnerable nerve cells just as they are making vital connections to each other.

While the association between possible pesticide exposure and autism is interesting, an expert not involved in the research pointed out that it has a major flaw.

Because the study looked back in time, researchers weren't able to collect blood or urine samples to directly measure pesticide exposures. And they looked at risks associated with four different classes of chemicals.

"So this study cannot pinpoint specific substances as a culprit," said Philippe Grandjean, an adjunct professor of environmental health at Harvard School of Public Health in Boston, "Also, they cannot relate to specific levels of exposure, and they have not taken into account the possible contribution by residues in food," he said.

As a result, he said, the link reported in this study is weak.

Results of the study were released online on June 23 in the journal Environmental Health Perspectives.

One in 68 children is now diagnosed with autism, according to the U.S. Centers for Disease Control and Prevention. Autism is a disruption in normal brain development that generally appears within the first three years of a child's life.

There's no known cure for the disorder and no certain cause. But, some studies have pointed to pesticides as one possible culprit. Children of farmworker parents, who are exposed to chronic low doses of pesticides before they are born and in the first years of life, when their brains are still developing, have a higher risk for neurodevelopmental problems like autism than children who are not exposed to these chemicals.

For the new study, researchers recruited nearly 1,000 families with children who were 2 to 5 years old at the time of the study. About 486 of those children had a confirmed diagnosis of autism. Another 168 had some other kind of developmental delay, and 316 were developing as expected.

Parents were asked extensive lists of questions about lifestyle and environmental exposures, and mothers listed the addresses where they lived shortly before and during their pregnancies.

Researchers then compared those addresses to a California database of pesticide applications. The database collects information about the kind of chemical that is used, how much is used, and when it is applied.

Most of the women in the study had not lived near any pesticide applications during their pregnancies. Only about a third had been within a mile of where the chemicals were sprayed.

The researchers found that children with autism were more likely to have lived within a mile of a pesticide exposure before birth than typically developing kids. The risk was 60 percent to about 200 percent higher, depending on the kind of chemicals that were sprayed, how close the family had been to the treated area, and when, during pregnancy, a woman had been exposed.

In general, exposure during the third trimester appeared to be riskiest, and odds of having a child with autism went up the closer the family had been living to the pesticide application, suggesting that doses got higher the nearer women were to the chemicals.

Despite some concerns about the study design, Grandjean says this study -- along with previous studies that were able to measure exposure more directly -- provides further support for the notion that pesticides may be a contributing factor in the autism story.

The authors agree that their study represents only a small piece of the puzzle.

"These neurodevelopment disabilities are not the function of a single factor," said Hertz-Picciotto. "I would suspect that there's a number of different factors at play that have to do with maternal health, maternal nutrition, as well as chemicals that are used around the home as well as other factors like air pollution. It's going to be an accumulation of factors for any one woman," she said.

But based on her study, she said pregnant women should be aware that some of the chemicals found in commercial pesticides, like pyrethroids, are also sold for use around the home.

Even worse, they're sometimes labeled as "all natural" products, because they're based on a chemical that comes from chrysanthemum flowers. But Hertz-Picciotto says there's nothing natural about them.

"It's a synthetic product that's been designed to be more toxic than the natural product it's imitating," she said.

Hertz-Picciotto recommends that pregnant women with insect problems play it safe by looking for less toxic alternatives, like a powder called diatomaceous earth, which kills insects by dehydrating them.