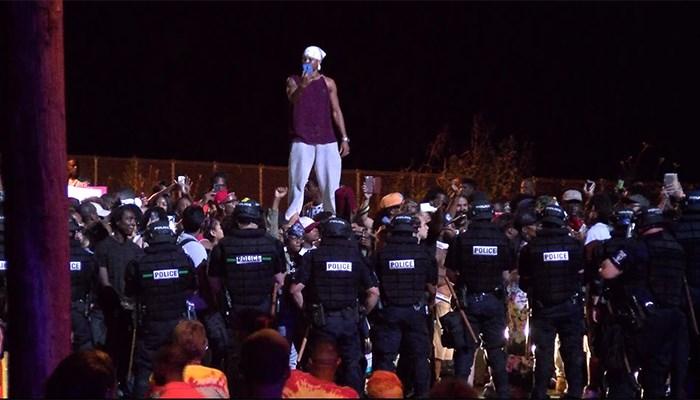 Following the shooting, a large crowd has gathered near the scene in protest.

The incident happened around 4 p.m. at an apartment complex. Officers said they were searching for a person with an outstanding warrant when they saw a person get out of a vehicle with a firearm. The man has since been identified as 43-year-old Keith Lamont Scott.

The officers said they immediately requested MEDIC and began performing CPR, WBTV reported. The person was pronounced dead at the hospital.

Police said a firearm “the subject was holding at the time of the shooting” was recovered at the scene, and that detectives were interviewing witnesses to the incident.

WBTV reported that by 9 p.m., large crowds had gathered in the area of the shooting. Some were shouting at police, some held signs that read “Black Lives Matter” and “It Was A Book.” It appeared at one point the crowds were blocking patrol cars from moving in the street, and even climbing on top of them, according to WBTV.

At 11 p.m. large clouds of what appeared to be tear gas could be seen coming from the crowds of protesters after officers in riot gear were seen putting on gas masks.

Video from WCCB-TV in Charlotte showed police in riot gear stretched across a two-lane road confronting protesters at the apartment complex later in the night. Some of the officers flanked the main line on one side of the road.

Some protesters were heard yelling “Black lives matter,” and “Hands up, don’t shoot!” One person held up a sign saying “Stop Killing Us.”

Charlotte-Mecklenburg Police Department said on Twitter that several officers were injured during the protests.

Officer Brentley Vinson was the officer involved in the shooting, department spokeswoman Cindy Wallace said in a new release. Vinson, who has been with the department for two years, has been placed on administrative leave, which is standard procedure in such cases.

WBTV reported that a woman claiming to be the sister of the man who was killed live streamed the scene on Facebook for more than an hour after the shooting.

WBTV reported that the woman said she heard police come up to the man yelling at him to get his hands up, and then breaking open the car window. She claimed he was Tasered and then shot four times. In the video, she said the man was disabled, didn’t have a gun and was even scared of them.