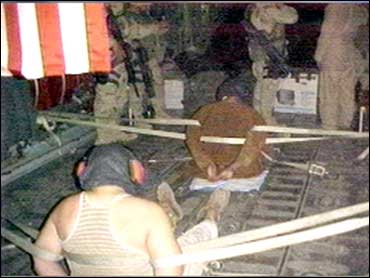 The Pentagon Friday was investigating to find out who took and released photographs of terror suspects as they were being transported in heavy restraints aboard a U.S. military plane.

Four photographs of prisoners - handcuffed, heads covered with black hoods and bound with straps on the floor of a plane - appeared overnight on the web site of radio talk show host Art Bell.

The photos are the first giving a glimpse into security measures aboard any of the airplanes used over the past year as prisoners were transferred to prisons in and around Afghanistan and elsewhere around the world, including to the high-security prison at Guantanamo Bay, Cuba.

It has long been known that prisoners were heavily restrained, and photos of prisoners bound and kneeling after arrival in Cuba early this year created a stir among human and prison rights groups.

The plane in the latest photos was a C-130, said Pentagon spokesman Lt. Col. Dave Lapan. But it wasn't yet determined Friday where it was going or when the photos were taken. Officials believe it was not an authorized photo and know its release was unauthorized, he said.

"We have very very tight restrictions on any images of the detainees for security purposes and because we have no interest in potentially holding detainees up for any kind of public ridicule," she told a Pentagon press conference.

It is at least the third time prisoner photos have troubled the Pentagon.

Though the Defense Department has limited the news media in the kind of photos it can take of prisoners from the counter-terror war, officials discovered that troops posed for photos with American Taliban captive John Walker Lindh as he was handcuffed and wearing a blindfold carrying an obscenity they had apparently scrawled across it.

The military itself takes photos for documentation and individual soldiers often take their own photos as souvenirs of deployments.

In a court motion, Lindh's lawyers also said earlier this year that unofficial photos and videos of Lindh were taken aboard the amphibious assault ship USS Peleliu, where he was confined. Officials said an officer confiscated cameras and film and erased digital images.

Also as part of a court filing, Lindh's lawyers released a picture of him in Afghanistan, blindfolded, strapped to a stretcher and naked. Defense officials have said that while that photo may have appeared shocking, he was naked as part of his preparation for medical treatment.