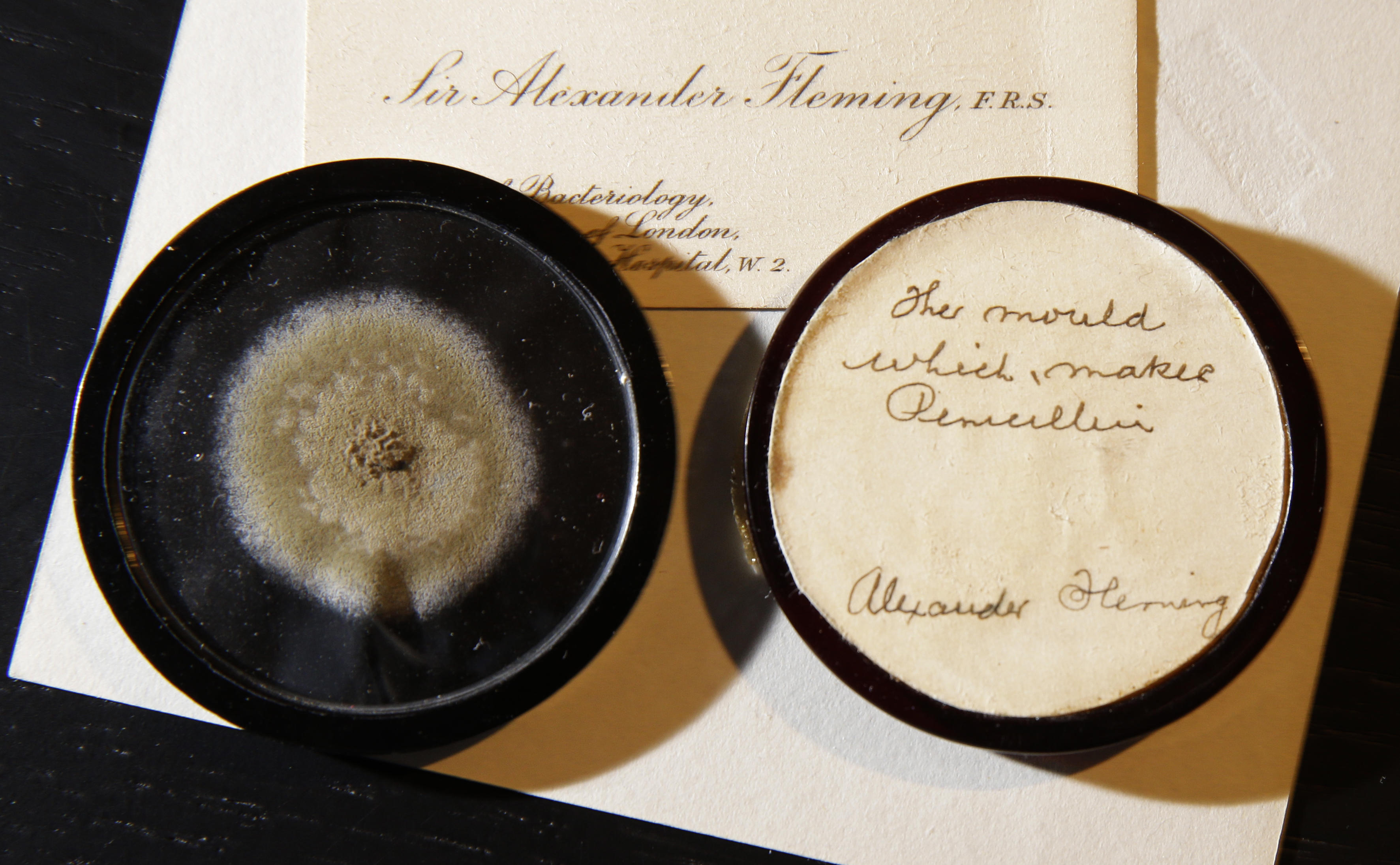 LONDON -- How much is an old, dried-out piece of mold worth? Apparently more than $14,600 if it was created by the doctor who discovered penicillin.

The nearly 90-year-old swatch of mold has a rather extraordinary history: It came from the laboratory of Dr. Alexander Fleming whose revolutionary discovery brought the world its first antibiotic, credited with saving millions of lives worldwide.

The patchy bit of mold from his niece’s collection was auctioned in London on Wednesday for 11,875 pounds  -- $14,617. The buyer was not identified.

The mold is preserved in a round glass case and features an inscription by Fleming on the back, describing it as “the mould that first made penicillin.”

That, however, may be a stretch. The Scottish-born doctor likely made at least dozens of such mold mementos, derived from his original sample of the fungus.

Fleming “sent these samples out to dignitaries and to people in the scientific world, almost as a kind of holy relic,” said Matthew Haley, director of books and manuscripts at the auction house Bonham’s.

He noted that other bits of mold were given to Pope Pius XII, Winston Churchill and Marlene Dietrich, perhaps in an effort to cement Fleming’s legacy as the discoverer of penicillin in 1928.

Before the discovery, infections like pneumonia and rheumatic fever were near death-sentences.

“When it first became available, penicillin was called a miracle drug,” said Kevin Brown, archivist at the Alexander Fleming Laboratory Museum. “Its discovery began a new, life-saving era in medicine.”

In some ways, the discovery was accidental. Fleming found mold growing in an experiment when he returned to his cramped lab after a stay at his country house. He had returned from his summer vacation -- to discover a strange occurrence in a petri dish.

“I certainly didn’t plan to revolutionize all medicine,” Fleming later said, “CBS This Morning” reported. “But I guess that was exactly what I did.”

What he found in the petri dish was a mold that had drifted in through the air from another lab -- and it had stopped the spread of a bacteria culture that Fleming had been growing dead in its tracks.

“I had no notion that I had got a clue to the most powerful therapeutic substance yet used to defeat bacterial infections in the human body,” Felming said.

Brown said, “Fleming noticed something that other people would have missed and saw the potential of penicillin to treat patients.”

While Fleming didn’t have the resources to advance his discovery, other researchers did. Scientists at Oxford University further developed penicillin, and production was ramped up so that enough of the antibiotic would be available for the Allied invasion on D-Day in 1944. Fleming and Oxford scientists Ernst Boris Chain and Howard Walter Florey were awarded the Nobel Prize in medicine in 1945.

Brown noted that not everybody was thrilled to receive the preserved mold medallions and that some got multiple copies, including Queen Elizabeth’s husband, Prince Philip.

“Every time he met Fleming, he got another one of these things,” Brown said.