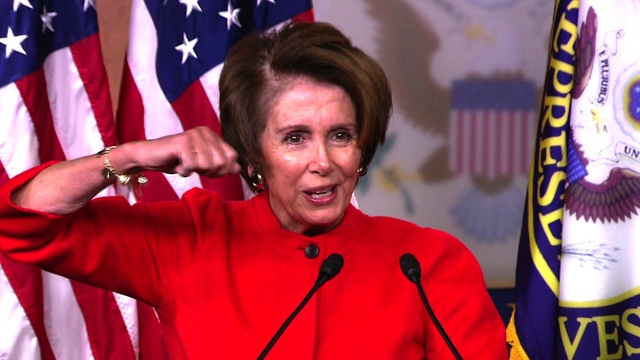 "Here we go again," Pelosi said during a press conference. "Months have gone by, and over two million people have not received their unemployment benefit on long-term unemployment.

"These families are in danger now of losing their homes," she went on. "And why? Because of the extreme nature, the indifference, of the Republicans in the House, to the needs of the American people, even after the Senate in a bipartisan way has passed a compromise with pay-fors."

Last week 10 senators struck a rare compromise to reauthorize the Emergency Unemployment Compensation (EUC) program for five months, in addition to retroactively paying benefits that expired on Dec. 28. The bill is fully funded and would introduce reforms to the program, including curtailing payments to wealthy individuals and giving more specialized aid to the long-term unemployed.

Citing a letter he received from National Association of State Work Force Agencies, which made the case that the Senate bill's requirements would "cause considerable delays in the implementation of the program and increased administrative issues and costs," Boehner argued Wednesday the bill doesn't stand a chance in his chamber.

"We have always said that we're willing to look at extending emergency unemployment benefits again, if Washington Democrats can come up with a plan that is fiscally-responsible, and gets to the root of the problem by helping to create more private-sector jobs," Boehner wrote in a statement on his website. "There is no evidence that the bill being rammed through the Senate by [Majority] Leader [Harry] Reid meets that test, and according to these state directors, the bill is also simply unworkable."

Pelosi said the legislation isn't her first choice, either, contending the benefits need not be offset. But as a compromise, she added, the bill is something she'd "be willing to accept."

"The fact is that this is a stimulus to the economy - ask any economist. Unemployment benefits are spent immediately, injecting demand into the economy and creating jobs," she said. "I myself do not believe that the unemployment insurance benefits need to be offset; most of the time they have not. But if they're going to be offset, and there's bipartisan agreement to do so, then let's just take that up and get this done."