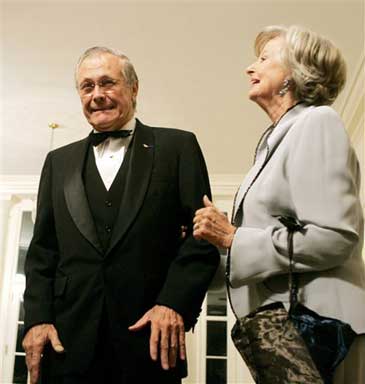 Payne Stewart, known as much for his trademark knickers as his indomitable spirit in the Ryder Cup and in winning three major golf championships, died today when the LearJet he was aboard flew uncontrolled for hours and crashed in South Dakota.

Government officials said the plane, believed to have five people on board, may have suffered a pressurization failure.

The 42-year-old Stewart won his second U.S. Open in June and played in his first Ryder Cup since 1993. He was on his way to Texas, where the Tour Championship is being played this week in Houston.

"It is if difficult to express our sense of shock and sadness over the death of Payne Stewart," PGA Tour commissioner Tim Finchem said.

Stewart was one of the most recognizable players in golf because of his knickers and tam o'shanter hat, along with a fiery spirit that carried him to 18 victories around the world.

His last victory was his finest moment.

Stewart made a 15-foot par putt on the final hole at Pinehurst No. 2 in North Carolina to win the U.S. Open by one stroke over Phil Mickelson. It was the longest putt to ever decide a U.S. Open on the 72nd hole in the event's 99-year history.

"There were times when

he said. "I had a wakeup call to the fact that this is what I'm good at, and I'm still good at it."

Part of his turnaround was a newfound faith, drawn to church through his children, 13-year-old Chelsea and 10-year-old Aaron.

It was Stewart's third major championship in a career that began in 1980, and put a stamp on what had been a revival late in his career.

He missed the cut last week in the Disney Classic, but reflected on his career the day before the tournament began.

"I'm proud of the fact that my faith in God is so much stronger and I'm so much more at peace with myself than I've ever been in my life," Stewart said after winning the U.S. Open. "Where I was with my faith last ear and where I am now is leaps and bounds."

He won his first major championship in 1989, the PGA, at Kemper Lakes outside Chicago, beating Mike Reid by a stroke. Two years later, he won the U.S. Open at Hazeltine in Minnesota after an 18-hole playoff with Scott Simpson.

But Stewart then went into the worst slump of his career, going eight years with only one victory and becoming surlier with galleries and with the media the longer it went on.

He nearly won the U.S. Open last year, taking a four-stroke lead into the final round at The Olympic Club in San Francisco before losing by one stroke to Lee Janzen. But the transformation of Stewart was already under way.

When he won at Pebble Beach in February, he talked about the days when he would storm off the course, determined to keep golf in perspective and spend more time with his family.

"I'm a lot older and I'm a lot wiser. I'm more mature," he said. "I'm not going to blink and miss my family growing up. When I'm out at the golf course, I'm going to prepare myself to be the best I can. And when I'm home, I'm going to be a father."

In a thrilling duel with Mickelson, Stewart made crucial putt on the final three holes at Pinehurst No. 2. When the final putt fell, he thrust his arm into the air and let out a roar.

"All I wanted to do was give myself a chance," Stewart said, choking back tears. "I never gave up. I got the job done."

The U.S. Open also secured Stewart a spot on his first Ryder Cup team in six years. He embodied the passion of the Ryder Cup, and boldly suggested that one reason the United States had not won since 1993 was that he was not on the team.

He won only a half-point at The Country Club in Boston last month, but his presence was considered a motivating factor for the Americans, who staged the greatest comeback in history to win back the Cup.

Along with 11 career victories on the PGA Tour, Stewart also won seven times around the world.

He is survived by his mother, Bee, of Springfield; wife Tracey, whom he met while playing in Australia early in his career, and his two children.

The PGA Tour said his spot in the Tour Championship, for the top 30 on the money list this year, will not be filled.

A blue ribbon was tied to the name plate on his parking place at Champions Golf Club in Houston.