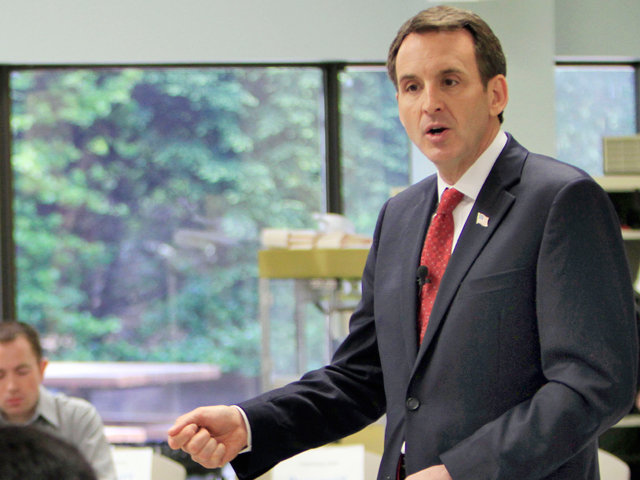 At a time when Republicans in Washington are split over U.S. intervention in places like Libya and the ongoing war in Afghanistan, presidential candidate Tim Pawlenty is staking out an unequivocally hawkish foreign policy stance, declaring that the Republican party needs to exert clarity and strength abroad.

"Our enemies in the War on Terror, just like our opponents in the Cold War, respect and respond to strength," Pawlenty said in a speech at the Council on Foreign Relations this morning, according to his prepared remarks. "Sometimes strength means military intervention. Sometimes it means diplomatic pressure. It always means moral clarity in word and deed."

Pawlenty laid out a comprehensive and detailed analysis of the pro-democracy uprisings occurring throughout the Arab world, slamming President Obama for an unclear policy of "engagement."

"He has been timid, slow, and too often without a clear understanding of our interests or a clear commitment to our principles," Pawlenty said of the president's response to the Middle East unrest.

Yet he also took aim at his Republican colleagues, parts of which, he said, "now seem to be trying to out-bid the Democrats in appealing to isolationist sentiments. This is no time for uncertain leadership in either party."

Pawlenty said there was nothing wrong with Republicans questioning Mr. Obama's military leadership in the Libyan war, or his plan for drawing down troops in Afghanistan.

"What is wrong," he said, "is for the Republican Party to shrink from the challenges of American leadership in the world."

The former Minnesota governor laid out proposals for solidifying U.S. relations abroad, calling for a more trusting relationship with Saudi Arabia and a commitment to removing Libyan strongman Muammar Qaddafi and recognizing the TNC as the Libyan government.

"Now is not the time to retreat from freedom's rise," he said.