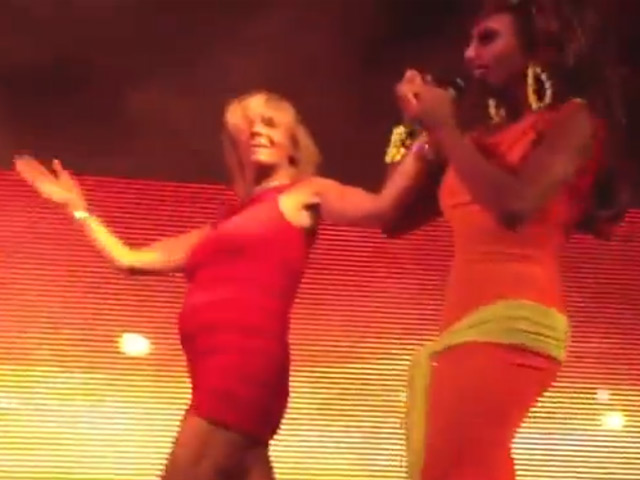 Krentcil appeared at a drag show in Midtown Manhattan, reportedly billed on the club's website as the "Redhot Media Sensation." She was led by a performer on the stage to a chair, dancing and posing for the crowd in a tight red dress.

"I never took my daughter into a tanning salon," Krentcil said to the laughter and applause of the crowd, CBS New York reported.

Krentcil continued to repeat that she did not bring her daughter into a tanning booth.

"Number one is that my daughter never was in that salon," she said, grabbing at the microphone. "This place is the best place ever - but my daughter was never in that room."

Krentcil pleaded not guilty in May to a child endangerment charge.

Prosecutors accused Krentcil of taking her daughter to a tanning salon and bringing her to a tanning bed, causing a slight sunburn. Krentcil said the entire situation was a misunderstanding.

She said when the school nurse asked her daughter how she got burned, her daughter simply said, "'I go tanning with mommy.'" However, Krentcil said her daughter's burn was not from getting into a tanning bed, but from being outside and playing in the backyard.

"The whole thing's preposterous," Krentcil said back in May.

Since making headlines, the 44-year-old mother has been the inspiration for a "tanorexic" doll manufactured by HeroBuilders, according to CBS New York. Krentcil was also in the pages of "In Touch" magazine earlier this month, posing without her trademark tan after the magazine challenged her to go without tanning, real or fake, for a month.