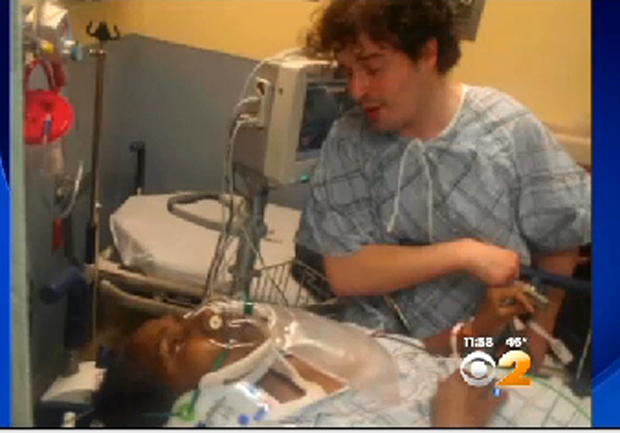 NEW YORK -- The horror of the Metro-North train derailment in the Bronx Sunday was marked by some inspiring stories of bravery, CBS New York reports.

As CBS 2's Amy Dardashtian reported Sunday night, passengers said a man with cerebral palsy walked around the train helping others onboard, one woman said he saved her life.

“I was seated in my seat near the window,” said Dr. Denise Williams, 55.

Suffering from a fractured spine, Williams spoke to CBS 2 moments before being wheeled into back surgery.

“It was going fast,” she said. “What I felt was a derailment, and I felt this noise — a bumpy, bumpy noise.”

Williams’ family rushed to her side at NewYork Presbyterian-Columbia University Medical Center, but to their surprise, someone was already there watching over her. Steven Ciccone, a celebrity pastry chef who has cerebral palsy, rushed to the aid of Williams and others when the train derailed.

Ciccone spoke to CBS 2 from his own hospital bed.

“You know, I just spoke to her and held her hand asked her what was wrong. She asked, ‘You know, could you do something for my head? Could you make it more comfortable?’” he said. “I was crocheting a scarf and I had a ball of yarn, so I used the ball of yarn to support underneath her neck like a pillow.”

Later in the hospital, CBS 2 caught up with Ciccone as he prepared for his own exams, his mind again focused on others. He sent a message to Williams.

“All right, Denise, you’ll hang in there,” Ciccone said. “And I’m praying for you, and I love you.”

“I just kept praying to God, and me and Steve sat right there, and he said, ‘Well, let’s say a prayer together,’” said Williams’ cousin, George Butler.

And although Ciccone insisted he is not a hero, Williams’ family said he undoubtedly is.

“I think he’s a hero, and not only that — he was trying to get in touch with everybody once he got to the hospital,” a Williams relative said. “He was just roaming the emergency room.”

Both Ciccone and Williams have a long road ahead. On Sunday night, they remained at the hospital undergoing further exams.

Four people were killed, and 70 others were injured, when the Hudson Line trainderailed near the Spuyten Duyvil station in the Bronx around 7:20 a.m. Sunday. The National Transportation Safety Board is investigating.