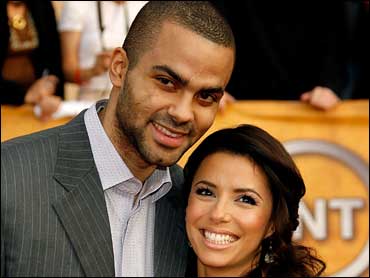 For Tony Parker, only French-made wedding cakes will do.

The NBA champion, set to marry "Desperate Housewives" star Eva Longoria next week, is staying coy about plans for the event.

Speaking to reporters Thursday in Paris, the San Antonio Spurs point guard shrugged off questions about the wedding date and venue, believed to be July 7 at a French chateau.

"I don't care where I'm going to get married," he said. "It's a girls' thing." To other queries, he replied: "That's a question you should ask Eva."

He dismissed one rumor: that the wedding cake would be flown in from the United States.

"Why take a cake from the United States ... if it is France that makes the best cakes?" he asked.

While Longoria picked the wedding site believed to be the luxurious chateau de Vaux-le-Vicomte Parker said he was taking charge of the food and music. And that's all he would say.

Parker, who was voted the most valuable player of the NBA finals earlier this month after the Spurs won their fourth title in nine seasons, wanted to talk about basketball.

"I think that this is just the beginning," he said. "I still have a long way to go because my idol is Michael Jordan and he won six titles so I'm only halfway there."

Looking long-term, Parker said he would base his decisions on fellow players Tim Duncan and Manu Ginobili and coach Gregg Popovich. Parker is signed with the Spurs through 2009.

"My decisions about the future and where I am going to play and if I'm going to stay in San Antonio will depend on how long Duncan wants to play, Ginobili and Popovich."