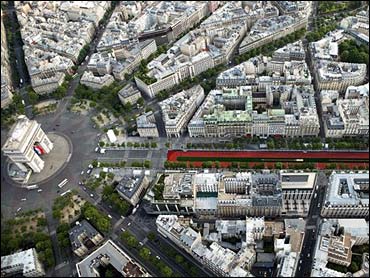 Exactly a month before the vote, front-runner Paris received the best overall review Monday in an IOC evaluation of the five cities bidding for the 2012 Olympics.

The International Olympic Committee issued a 123-page report evaluating the bids of Paris, London, New York, Madrid and Moscow — the most competitive and glamorous field in Olympic bid history.

London, Madrid and New York also got positive ratings, while long-shot Moscow came in for criticism.

The report did not rank the cities, but offered an insight into the strength and weaknesses of each bid. It focused on technical issues such as venues, financing, transportation, accommodations, security and public and government support.

The findings will serve as a guide for the 117 eligible IOC voting members who will cast secret ballots in Singapore on July 6. However, the vote also will take into account geopolitical and other issues not covered by the report.

The report was based on visits to the five cities in February and March by the IOC evaluation commission, headed by Morocco's Nawal El Moutawakel.

Paris has been considered the favorite since the start of the campaign nearly two years ago, and the report only reinforced that status. However, the report also made clear that London, New York and Madrid are worthy contenders.

The report also noted Paris had "fully taken into account" the IOC's framework for controlling the cost and size of the Olympics.

London, which has gained significant momentum in recent months, was praised for the "significant sports and environmental legacies" involved in its plans for regenerating the city's rundown east side.

However, the IOC noted "careful planning would be required to ensure that all facilities are completed on time." It also said that London's improved transportation plans were workable if "fully delivered" before 2012.

Madrid was cited for sports and environmental legacies. In the only negative comment, the report said Madrid may need to use hotels in cities about an hour away by train to meet Olympic requirements.

New York won general positive assessments, including for long-term legacy, but the report cited the continuing uncertainty over its proposed $2 billion stadium on Manhattan's West Side.

A vote on the project, crucial to the city's chances, was postponed for a second time Friday and was scheduled for later Monday in Albany, N.Y.

The IOC report said "no guarantees were provided" to ensure that the stadium and an international broadcasting center would be built.

Moscow, considered the outsider all along, received the most stinging comments in the report.

"A lack of detailed planning in the candidature file and background information made it difficult for the commission to evaluate the project," the IOC said.