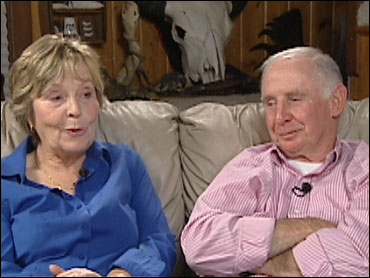 A month ago, Sally and Chuck Heath's third child, Sarah Palin, a self-proclaimed hockey mom and wildly popular governor of Alaska, was thrust into the national spotlight when John McCain picked her to be his running mate.

In the time since, Palin's readiness to be president in the event she and McCain are elected and McCain becomes incapacitated has been widely questioned by Democrats and many in the media.

But, in an exclusive interview at their home in Wasilla, Alaska, the Heaths told Early Show co-anchor Harry Smith their daughter is, indeed, ready to occupy the Oval Office at a moment's notice.

When asked by Smith about rumblings that Palin isn't ready to be vice president and a heartbeat away from the presidency, Chuck replied, "She's ready to do anything she wants to be. And she perseveres, she works so hard, she learns so fast. Yeah, she -- I -- I don't worry about that at all. That's what I'll tell 'em. Yeah. ... You want some honesty, yeah -- yeah, not a typical politician, get her. Yeah. Yeah."

Sally added, "She's got that ability to relate to people. She's diplomatic. She can get her point across."

As for assertions from Republicans that Palin's being treated unfairly by the media, Chuck said, "That's what I feel. Someone said, 'Well they have to get to know Sarah Palin,' but Sarah Palin -- there's a good side of Sarah Palin. They're digging and digging for the bad side, and there is no real bad side. They're fabricating a lot of things that I don't want to go into."

What's it like, now that Palin has become a household name?

"I hope the world gets to know the real person, because she is a remarkable girl," observed Sally.

In her acceptance speech at the GOP convention in St. Paul, Palin paid tribute to Chuck and Sally, saying, "My mom and dad both worked at the elementary school in our small town. And among the many things I owe them is a simple lesson that I've learned: that this is America, and every woman can walk through every door of opportunity. And my parents are here tonight... "

Chuck admitted to Smith that, "We were very nervous, 'cause there was a lot riding on that speech. And as we sat in the audience -- I said something, and I usually don't get nervous before she talks. And Sally says, "Remember, she has never let us down yet."

Chuck recalled that, of their four kids, Sarah was the one who always had a mind of her own.

"I could bend my other kids and have them do things," Chuck said, "and, if she knew she was right, I had a hard time convincing her there was another way of doing it. But she was usually always right, and could justify what -- what -- she wanted to do, you know. Very strong willed and very hard-working."

Palin won the title of Miss Wasilla in 1984, and Chuck says, "She won a few dollars for that. I wasn't really into the pageant thing, but she convinced me it was worth a little money, and it was."

As for a "Saturday Night Live" spoof of Palin claiming you can see Russia from Alaska, and that that constitutes foreign policy experience, Chuck volunteered, "I thought it was kinda cute. Tina Fey did a good job!"

With three days remaining until her debate with Joe Biden, Palin's parents say they have no doubt she'll surprise even her harshest critics.

What part of her personality, or her upbringing, is going to serve her best in all of this? Replied Chuck, "Hard-working, perseverance, honesty. Yeah, honesty. She won't fabricate things or exaggerate things. She'll tell it the way it is."