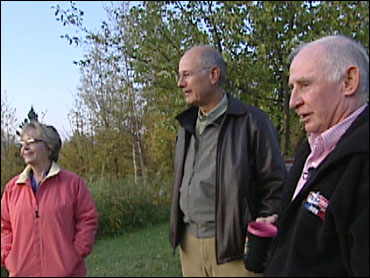 On Thursday, Alaska Gov. Sarah Palin takes the stage with Delaware Sen. Joe Biden for their first and only vice presidential debate at Washington University in St. Louis, Mo.

The Early Show wanted to learn more about Gov. Palin, so Harry Smith headed to Wasilla, Alaska for an exclusive interview with her parents, Chuck and Sally Heath.

Alaska is Sarah Palin country, and a visit to her parent's home is a little like being in a natural history museum.

"Everything in here has a story," Chuck Heath said, pointing to what he considers "my best find ever, a gold mine. It's called a step bison and they went extinct about the time of the mammoths. And the mammoths went extinct, oh, 8,000, 10,000 years ago. We found him frozen in the permafrost."

"People who haven't been here, I'm not sure they get Alaska," said Smith at the sight of the step bison fossil.

Chuck says with a laugh, "You have to live here and experience it."

Outside, displayed on the wall of a shed, and in a tall mound in the backyard, are a collection of antlers.

"People say, 'Gee, you shoot all those?'" Chuck explained that the antlers were all shed naturally.

Chuck and Sally Heath moved to Alaska from Idaho 44 years ago.

"I told Sally we'd come up for one year. I knew better, but we'll try it for one year -- which a lot of guys tell their wives," Chuck explained with a laugh. "So, here we are."

Sally says she was "game for an adventure."

"It was going to be a challenge with our three tiny kids at the time, but we were willing to do it -- young and dumb," she said.

The Heaths' third child, Sarah, was outspoken and competitive.

Did the couple have a sense what was she was going to be when she grew up?

"She sure didn't give us an indication it would be politics," Sally told Smith.

From mayor of Wasilla, to governor of Alaska, and now, a vice-presidential nominee, Palin's sudden appearance on the national scene has been celebrated and increasingly criticized.

"They're digging and digging for the bad side. And there is no real bad side," Chuck said. "They're fabricating a lot of things, which I don't wanna go into, you know."

As a parent, Sally says the criticism is hurtful to hear.

"Mostly because, you know, how it affects the kids," she said.

They are worried about what the future might hold.

Despite having braved the wilds of Alaska for four decades, nothing has quite prepared them for the storm of attention that has followed Sarah.

"Did you see it coming?" asked Smith.

"The governorship had finally sunk in," Chuck said, "but this VP -- it hasn't sunk in at all yet."

For Chuck, it all still seems like a dream or a fantasy. So is it a good dream or a bad one?