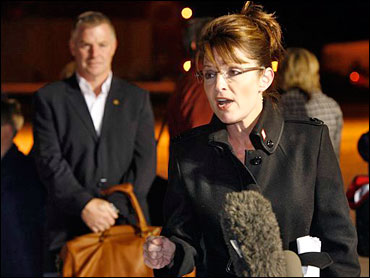 Alaska Gov. Sarah Palin called her critics cowards and jerks Friday for deriding her anonymously and insisted she never asked for the expensive wardrobe purchased for her use on the presidential campaign.

"I never asked for anything more than a Diet Dr. Pepper once in a while," Palin said as she returned to the governor's office from her two-month odyssey as the Republican vice presidential nominee. She said the Republican National Committee paid for the tens of thousands of dollars in designer clothes and accessories.

"Those are the RNC's clothes. They're not my clothes. I never forced anybody to buy anything," she said.

Republican Party lawyers are still trying to determine exactly what clothing was purchased for Palin at such high-end stores as Saks Fifth Avenue and Neiman Marcus, what was returned and what has become of the rest.

She particularly lashed out at the anonymous Republican campaign sources cited in a Fox News report who said she did not know Africa was a continent, not a country, and could not name the three countries in the North American Free Trade Agreement - Canada, the United States and Mexico.

"I consider it cowardly" that they did not allow their names to be used, she said.

Palin said those allegations aren't true. She recalled discussing Africa and NAFTA with aides who prepared her for the vice presidential debate with Democrat Joe Biden.

"If there are allegations based on questions or comments that I made in debate prep about NAFTA, and about the continent vs. the country when we talk about Africa there, then those were taken out of context," she said. "That's cruel, It's mean-spirited. It's immature. It's unprofessional and those guys are jerks if they came away with it, taking things out of context and then tried to spread something on national news. It's not fair, and it's not right."

"It's hard to believe these people worked for John McCain. They obviously have no loyalty to John McCain and no loyalty to his running mate," said Scheunemann, who prepared Palin for the vice presidential debate.

"I've worked in Washington for over 20 years. I have seen literally dozens of politicians, and Sarah Palin is as smart, tough and focused as any politician I've ever seen. I'm proud of the time I was able to spend with her," he said.

Palin also said she would not call on Republican Sen. Ted Stevens to resign, although last month, before his re-election bid, she said he should "step aside" and "play a very statesmanlike role in this now." Stevens, 84, was found guilty on seven counts of trying to hide more than $250,000 in free home renovations and other gifts that he received from a wealthy oil contractor.

Three days after the election, Stevens, the longest serving Republican in Senate history, is about 3,500 votes ahead of Democratic challenger Mark Begich with thousands of absentee ballots to be counted in the next two weeks.

Said Palin on Friday: "The Alaska voters have spoken and me not being a dictator, won't be telling anyone what to do."

When asked if she would call on him to resign, Palin said: "Not after the will of the people has been made manifest via that vote."

Meanwhile, RNC lawyers are discussing with Palin whether what's left of the clothing and accessories purchased for her on the campaign trail will go to charity, back to stores or be paid for by Palin, a McCain-Palin campaign official said Friday, speaking on condition of anonymity because the campaign hadn't authorized comment.

The sorting should be completed in the next four or five days, the campaign official said, declining to say whether the RNC was sending anyone to Alaska to help take inventory.

The RNC spent at least $150,000 on designer clothing, accessories and beauty services for Palin after she became John McCain's running mate in September. The spending included $75,062 at Neiman Marcus in Minneapolis; $49,425 at Saks Fifth Avenue; $9,447 at Macy's; and $789 at the luxury retailer Barneys New York. Some of the purchases were for Palin family members, such as $4,902 spent at upscale men's clothier Atelier and $92 at Pacifier, a Minneapolis baby boutique.

The McCain-Palin campaign said about a third of the clothing was returned immediately because it was the wrong size, or for other reasons. However, other purchases were apparently made after that, the campaign official said.

The spending drew a complaint against Palin and the RNC by a Washington government watchdog group. Citizens for Responsibility and Ethics in Washington filed a complaint with the Federal Election Commission accusing Palin and the Republican Party of violating a federal ban on the use of campaign funds for personal expenses such as clothing.

The RNC didn't respond to repeated requests by The Associated Press for comment Friday.

It's routine for candidates to get professional hair and makeup services at campaign expense before they go on camera, but Palin's shopping spree at Republican donors' expense is unusual. It contrasted with the down-to-earth "hockey mom" image that Palin sought to craft and gave the campaign unwanted publicity in the form of newspaper headlines, Internet chatter and comedians' jokes.

FEC spokesman Bob Biersack declined to comment on the spending beyond confirming that the commission has received CREW's complaint.

Palin returned to Alaska late Wednesday night, her final flight in the McCain-Palin campaign plane. Dozens of supporters greeted her with chants of "2012! 2012!" as she walked off the airplane - encouragement for her to run for president in four years.

Asked by reporters if she might run, Palin said: "We'll see what happens then."

The governor said she hoped to work with President-elect Obama on energy policy.

She returned home after spending Tuesday night in Phoenix, where she watched election returns with McCain.