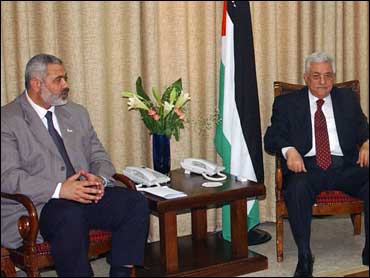 There were no immediate details on the provisions of the developing coalition agreement, or whether it would go far enough to end the international economic siege. But both sides said it was based on a proposal that many have interpreted to imply recognition of Israel, a key international demand.

The West and Israel have been withholding hundreds of millions of dollars from the Hamas-led government, which swept January parliamentary elections, because of the group's refusal to disarm, recognize Israel and accept existing peace agreements.

Hamas' has been unable to pay the salaries of 165,000 government employees since it took power six months ago, leaving the Palestinian Authority in disarray, reports CBS News correspondent Robert Berger.

"If that were to happen, we would have a re-energized peace process and new momentum in the Israeli-Palestinian dialogue," Regev said.

Hamas officials said the agreement did not amount to direct recognition of Israel. But elements of the platform — including acceptance of an Arab plan for a comprehensive Middle East peace agreement — suggest recognition of the Jewish state.

The agreement to join forces indicates Hamas has buckled under crushing sanctions imposed to pressure it to moderate its anti-Israel ideology.

Initially, Palestinians held the West and Israel to blame for their misfortune, but in recent weeks, began directing that criticism at the Hamas-led government. Tens of thousands of civil servants launched an open-ended strike last week to protest the government's failure to pay them for the past six months.

Western aid and Israeli transfer payments, now withheld, had been the main source of government salaries before Hamas took power. Government salaries provide for one-third of the Palestinian people, and the payment of erratic, small stipends has done little to alleviate the impoverishment of many Palestinians.

Both Abbas and Haniyeh urged workers to return to their jobs, but a union spokesman, Bassem Hadaida, said the strike would continue.

Ziad Abu Amr, an independent lawmaker who participated in the Abbas-Haniyeh meeting, said he expected the government would be formed "very quickly because the president and prime minister are eager to end the internal and external crisis that the Palestinian people are facing."

The proposal that would form the basis of the coalition's political program calls for a Palestinian state in the West Bank and Gaza, acceptance of U.N. resolutions calling for a territorial settlement, and an end to violence inside the borders of sovereign Israel. It also calls for acceptance of an Arab initiative that would lead to a comprehensive settlement of the Mideast conflict.

Israel has rejected the plan, which would require a full Israeli withdrawal from territories captured in the 1967 Mideast war.

(AP Photo/IntelCenter)
Al-Zawahri (shown at right in an April 2006 videotape), in his latest videotape, condemned the U.N. peacekeeping force now deploying in Lebanon under terms set out in a U.N. cease-fire resolution.

"What is so terrible in this resolution ... is that it approves the existence of the Jewish state and isolates our mujahedeen in Palestine from Muslims in Lebanon," he said in excerpts of the video aired on Al-Jazeera television.

Egyptian-born Al-Zawahri, Osama bin Laden's deputy, criticized the West for supplying Israel with weapons, and called on the Muslim world "to rush with everything at its disposal to the aid of its Muslim brothers in Lebanon and Gaza."

He sharply criticized Egypt, Jordan and Saudi Arabia, accusing them of siding with Israel in the fighting in Lebanon.

Egypt has willingly "abandoned its commitment to aid any Arab country against an Israeli aggression," he said. "The collusion of Egypt, Saudi Arabia and Jordan is very clear."