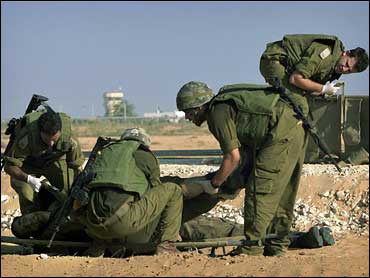 Palestinian militants tunneled into Israel at a Gaza border crossing Sunday, killed two Israeli soldiers and captured another, raising the threat of an all-out conflict in Gaza just a year after Israel's pullout.

Israel, which sent ground troops into Gaza after the assault, blamed the Hamas-led government and warned that militants and their leaders will be killed if the abducted soldier is harmed, while Hamas appealed for restraint. Three of the Palestinian attackers were killed in the battle with Israeli forces at the sensitive crossing point where the borders of Israel, Egypt and Gaza converge.

A spokesman for the Gaza militant group believed to be holding the soldier rejected calls for his release from Palestinian leaders.

Hamas played a leading role in the long-planned attack, and the operation cast a shadow over talks between Hamas and moderate Palestinian president Mahmoud Abbas' Fatah over a joint program that includes implicit recognition of Israel, as well as Hamas efforts to counter its image as a terror group and ease Western sanctions.

After the attack, Israel closed the vital border crossings, the only way people and goods can enter or exit the territory. Previous closings have lead to widespread hardships.

Hamas, which recently resumed its open involvement in rocket fire on Israel, confirmed its participation in the attack. The small Popular Resistance Committees and a previously unknown group, the Islamic Army, said they also took part.

One of those leaders, PRC leader Jamal Abu Samhadana, was killed in an Israeli air strike two weeks ago, shortly after accepting a senior security position in the Hamas-led government, part of a rapidly escalating round of rocket barrages and counterstrikes.

CBS News correspondent Robert Berger reports the Hamas-led Palestinian government, already hit hard by U.S. and European sanctions because of its refusal to renounce violence, distanced itself from the attack. It urged the captors of the soldier, said to be wounded in the stomach, to treat him well.

The brazen pre-dawn attack was the first ground assault by Palestinian militants since Israel pulled out of Gaza last summer, and the first abduction of an Israeli soldier by Palestinians since 1994, when militants captured American-born Nachshon Waxman, who was killed in a botched raid when Israeli commandos tried to free him from a West Bank hideout, reports Berger.

Palestinians spent months digging an 800-yard tunnel starting in Gaza and burrowing 300 yards into Israel. Bursting through before dawn, seven or eight militants attacked the Israeli guard post at the Kerem Shalom crossing point from the rear, "one of the reasons the troops were surprised," said military spokesman Capt. Jacob Dallal.

Most of Israel's attention was focused on the missing soldier, identified as Cpl. Gilad Shalit, 19. Israelis are especially sensitive about bringing soldiers home and in the past have freed large numbers of captured militants in return for soldiers or their bodies.

However, Israel has also traditionally hesitated to negotiate with militant groups over captured soldiers or hostages. Prime Minister Ehud Olmert called his Security Cabinet into special session at sundown Sunday to map out strategy.

The security body authorized Olmert to order military moves against Palestinian militants in Gaza, but first there would be diplomatic efforts to win return of the soldier, according to a government statement.

In the hours after the battle and the abduction, Israel issued threats, not offers to talk.

"We in Israel hold the Palestinian Authority, headed by Chairman Abu Mazen, and the Palestinian government responsible for this event, with all that implies," Olmert said at the start of Israel's weekly Cabinet meeting.

A statement from Abbas' office deplored the attack and said it threatened to give Israel a "pretext to launch a widespread military operation" against Gaza. Abbas was in touch with world leaders, including the U.S. secretary of state and the British foreign secretary, to discuss the latest crisis, said aide Nabil Abu Rdeneh.

Israeli Defense Minister Amir Peretz issued a direct threat against the militants holding Shalit, warning that "anyone who causes the soldier to be harmed should know that the soldier's blood is on his head."

"We intend to respond to the incident this morning in a way in which all involved ... understand that the price will be painful," Peretz told a news conference at the Defense Ministry in Tel Aviv.

Government spokesman Ghazi Hamad of Hamas said he knew of the abduction only from news reports. In a rare gesture, he addressed Israelis in Hebrew, learned while in an Israeli prison.

Speaking in the West Bank city of Ramallah, Deputy Prime Minister Nasser Shaer of Hamas called for the soldier's release. "We care about the life of the soldier and we call upon the kidnappers to guarantee his life and to release him," Shaer said.

He said Abbas and Palestinian Prime Minister Ismail Haniyeh were meeting late Sunday to discuss the issue of the soldier, but Abbas' office would not confirm that.

Hamas TV ran a statement by Abu Musanna, a spokesman for Islamic Army, a PRC offshoot, rejecting the appeals. He said the group's demands in exchange for the soldier would be "a prize for our people."

Reporters and photographers swarmed into Mitzpeh Hila, a tiny village in Israel's north where the soldier's family lives. His parents did not talk to reporters, but Maj. Gen. Gen. Elazar Stern, commander of the army's manpower branch, said he told them that, despite reports of Shalit being wounded, he was still able to walk.

A neighbor, Ilana Levy-Zrihan, said Shalit had been in the army for 11 months, and described him as "quiet, introverted, pleasant, everybody's friend." Pictures showed him as a slender youth with black-rimmed glasses.

Hard-line Israelis clamored for a large-scale Israeli invasion of Gaza to re-assert Israeli control. Shortly after the attack, Israel sent forces into the nearby area of Gaza. They were uprooting trees and searching for the beginning of the tunnel. The forces were still in Gaza at nightfall.