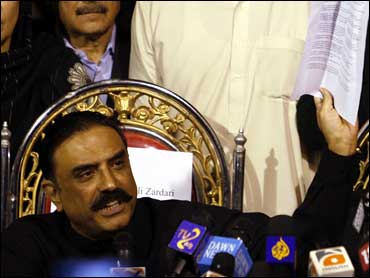 This column was written by Tariq Ali.

A multidimensional charade is taking place in Pakistan, and it is not an edifying sight. Pervez Musharraf has her political will: Bhutto's husband, Asif Ali Zardari, has become stopgap supremo until her 19-year-old son, Bilawal, can replace his late mother as chairperson-for-life. This farcical succession occurred in a party that was born in 1967 out of the mass struggle of disenfranchised students, workers, professionals and peasants for democracy and, yes, socialism. That is why it was named the Pakistan People's Party. Its trajectory encapsulates the crisis of democratic politics in Pakistan: a party is publicly expropriated and corrupted by a single faction from an old family; its members are treated like serfs; its weak-kneed leaders told to either accept their new overlords or find another vehicle for their ambitions. Where can they go?

The PPP's major rival, the Pakistan Muslim League, is hardly better. It is in the grip of the Sharif brothers. Patronized by the military and the state, they became very rich, which helped them to maintain their party and support. After Nawaz Sharif fell out with Musharraf and was toppled in the 1999 coup, he sought the protection of the Saudi royal family. Sporting Wahhabi headgear, he returned home in November with their support. It's bad enough having semipermanent military rule, but when the alternatives are deeply flawed booty politicians, what hope is there for this benighted land?

The roots of the problem go back to soon after the founding of the state, when the military-bureaucratic leaders decided at an early stage (1950) to become a US satrapy: the Dulles brothers saw to it that the new ally was locked into a network of cold war alliances. Henceforth, US global priorities determined Pakistan's foreign and domestic policies. Whenever there was the threat of a democratic victory by parties pledging to withdraw Pakistan from US security arrangements, Foggy Bottom would appeal directly to the Pakistani army. The coups d'état of 1958 and 1977 were greenlighted by Washington, with disastrous results. Then there was the trial and execution -- privately approved by Washington -- of democratically elected Zulfiqar Ali Bhutto, Benazir's father, by dictator Muhammad Zia ul-Haq; the creation of local state-backed jihadi groups to "liberate" Afghanistan from the Soviets; and the brutalization of the country's political culture with public floggings and hangings of criminals as well as activists.

The ultimate consequences of the anti-Soviet jihad were America's turning a blind eye as General Zia hurriedly nuclearized the country, the attacks of 9/11 and the NATO occupation of Afghanistan, with the ensuing instability on Pakistan's northwest frontier. The post-cold war embargo designed to punish Pakistan for its possession of nuclear weapons proved ineffective, and all family tiffs were happily forgotten as the "war on terror" commenced. The balance sheet is dismal.

The instability in the border provinces is a direct result of the NATO occupation and war in Afghanistan, which has created a crisis of conscience inside the army. There is much unhappiness at being paid to kill fellow Muslims in the tribal areas that border Afghanistan. The arrogant and humiliating behavior of NATO soldiers has hardly helped matters in either country, and sending US troops to train the Pakistani military in counterinsurgency can only further inflame passions. Long-term stability in Afghanistan requires a regional agreement involving India, Russia, Iran and Pakistan and the withdrawal of all NATO troops.

As for Musharraf, he has failed as an effective US point man in Pakistan. The elections, now delayed until February 18, are likely to be fixed and will thus lack legitimacy. The general's failure to protect Benazir Bhutto has not gone down well in Washington. When Hillary Clinton and Joseph Biden cast doubt on the government's explanation for her killing, it's a sure sign that he could be heading for the dustbin.

There is a Pakistani solution to the current impasse: Musharraf's replacement by a less contentious figure, an all-party government to prepare for free elections, removal of all curbs on the media and reinstatement of the sacked Supreme Court judges so they can investigate Benazir Bhutto's murder without fear or favor. With the slow death of the PPP, the country also needs a genuine, radical democratic party that can respond to the social needs of the underprivileged majority and the expanding demands of civil society.

For its part, Washington should accept a self-denying ordinance: it should stop treating the Pakistani army as contract killers on a turbulent Afghan frontier, and it should refrain from encouraging military rule. This was never a panacea for the country's ills, and never can be. And Washington should encourage regional unity to solve political problems without resorting to force. Were it to do so, pigs would fly. Pakistan's dark night is far from over.
By Tariq Ali
Reprinted with permission from The Nation