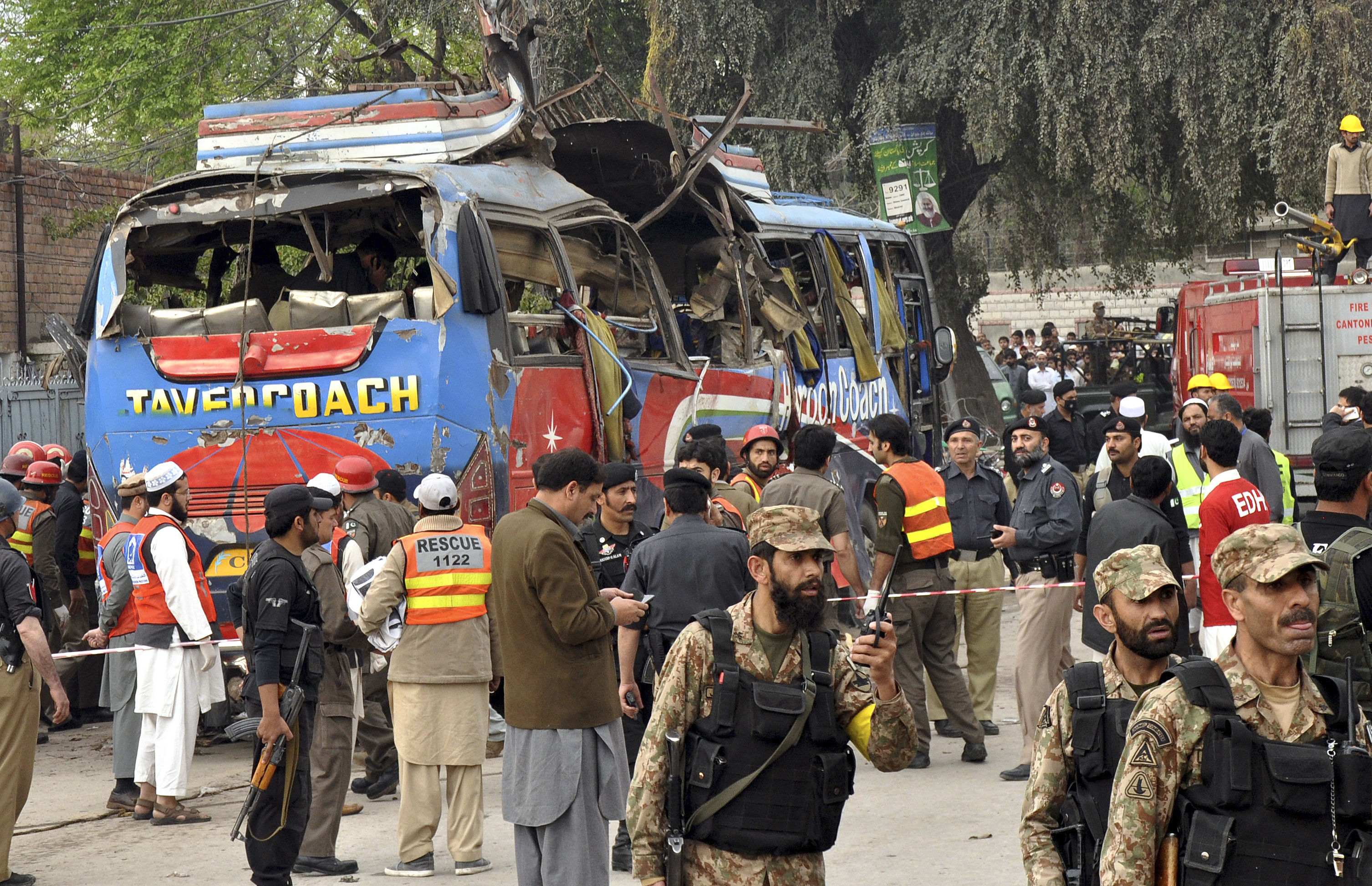 Though no one immediately claimed responsibility for the bombing, the attack underscored how despite Pakistan's sweeping military offensive, militants are still able to stage large-scale assaults. Peshawar, the capital of Khyber Pakhtunkhwa province, is still reeling from a December 2014 massacre at an army public school in the city that killed 150, mostly children.

Hours after the explosion, the Pakistani army chief signed the death sentences for 13 Taliban militants convicted of several attacks, including an assault on a mountain resort that killed 10 foreign tourists.

Wednesday's explosion took place in an area of Peshawar that houses military institutions and residences, according to police official Abbas Majeed Marwat. The bus was taking government employees from several nearby towns on their daily commute to work at the provincial secretariat in Peshawar, he said.

At least 54 people, including women and children, were also wounded in the blast, which was set off by an improvised explosive time device planted under a seat, he added.

Suspicion is likely to fall on the Pakistani Taliban and other allied militant groups who have been waging a war on the state for more than a decade, killing tens of thousands of people in a quest to overthrow the government and install their own harsh brand of Islam.

Local TV footage showed the wreckage of the bus as police and rescue officials rushed the wounded people to hospitals. Footage from a surveillance camera had captured the moment of the explosion, showing the bus moving on a road and then blowing up into a cloud of thick smoke.

"I saw people flying out of the bus shortly after it exploded with a bang," bystander Amir Aalam, 35, told The Associated Press.

From his hospital bed, 50-year-old Kafayatullah Khan, who suffered multiple wounds, said he was "struck by something hard."

"It was like the sky falling," added Khan, an auditor in the provincial government. He was on the bus with about 70 other people, he said.

Rescuers had to cut through the bus to pull out several of the victims, both dead and wounded, said another police official, Mubarak Zeb. He said some 8 kilograms (about 17 pounds) of explosives was used in the bomb.

The bus bombing was the deadliest this year in Peshawar, though there have been major attacks in recent weeks in towns and districts just outside it. One of those was the January assault by Taliban gunmen on a university in the nearby town of Charsadda, when 21 students and teachers were killed.

Peshawar sits on the edge of Pakistan's lawless tribal region that is home to the Taliban and al Qaeda-linked Islamic groups. The Pakistani military in June 2004 launched a massive offensive in the region.

"We are facing these cowards," provincial spokesman Mushtaq Ghani told reporters at the scene of the blast Wednesday.

He said the militants who fled the military offensive in the countryside have found refuge in urban areas, where they now stage attacks seeking to strike at soft targets.

Since the 2014 Peshawar school attack, Pakistan has resorted to strict measures to battle insurgents, including setting up military courts and lifting a moratorium on the death sentence.

Those convicted were tried in the closed door military courts for several attacks, including a 2013 attack at a base camp of a Pakistani northern peak called Nanga Parbat, popular with mountain climbers where the Taliban killed 10 foreign tourists and a Pakistani.