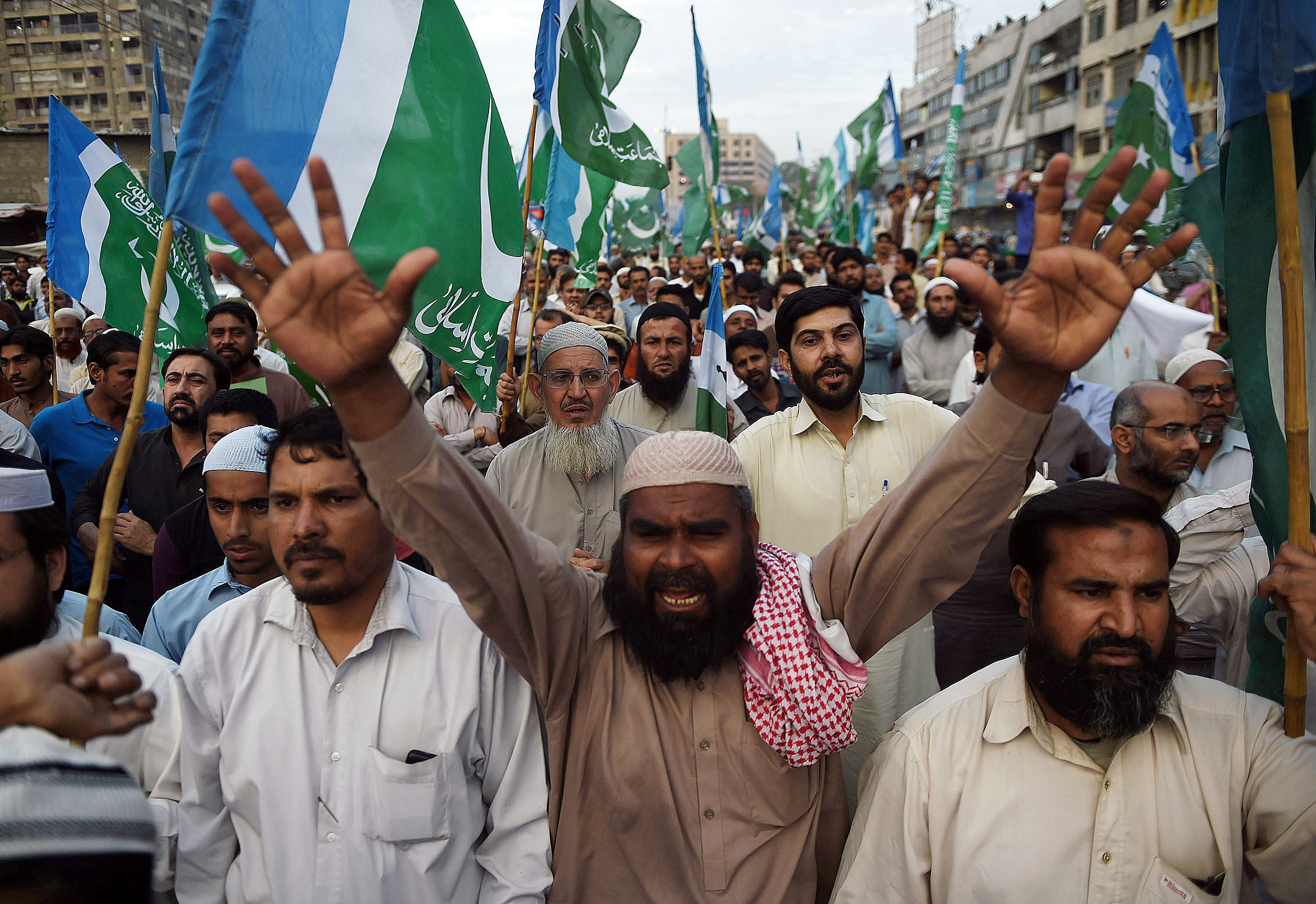 KARACHI, Pakistan -- Trying to lure him into the Islamic State of Iraq and Syria (ISIS), the would-be recruiter told Pakistani journalist Hasan Abdullah, "Brother, you could be such an asset to the Ummah"- the Islamic community. Abdullah replied that he was enjoying life and had no plans to join the jihadis.

"The enjoyment of this life is short-lived. You should work for the Akhira" - the Afterlife, the recruiter pressed.

ISIS had its eye on Abdullah not because he adheres to any extremist ideology but because, as a journalist, the group believed he could be a boon to its propaganda machine, Abdullah told The Associated Press, recounting his meeting with the recruiter.

His encounter was a sign of how ISIS is looking for sophisticated skills as it builds its foothold in new territory: Pakistan. It is courting university students, doctors, lawyers, journalists and businessmen, and using women's groups for fundraising. It is also wading into fierce competition with the country's numerous other militant groups, particularly the Pakistani Taliban and al Qaeda in the Subcontinent, the new branch created by the veteran terror network.

Here in Karachi, Pakistan's largest city, ISIS loyalists have set up their strongest presence, carrying out multiple attacks in the past year and setting up networks.

The port city of some 20 million people on the Arabian Sea has always been a favorite for militants to operate. Wealthy districts running on the city's profitable commerce hold potential for fundraising, while the crowded, cramped poorer districts that have spread around the city provide recruits and places to hide. It also gives recruiters links to other parts of the country, since its population is full of people who have migrated from tribal regions or Afghanistan, looking for work.

The Karachi police's top counterterrorism official, Raja Umer Khitab, warns that ISIS has great potential to grow in Pakistan, not only because of its large reservoir of Sunni extremists but also because of the virulent anti-Shiite sentiment among their ranks. Hatred of Shiites and attacks against them are a keystone of ISIS' ideology and one source of its appeal among some hard-line Sunnis as it set up its self-declared "caliphate" in Iraq and Syria.

ISIS first announced its presence in Pakistan with a bloody attack in May in Karachi in which gunmen boarded a bus carrying Shiites, ordered them to bow their heads, then opened fire, killing 45. The gunmen left behind a tattered piece of paper proclaiming, "Beware ... We have entered the battlefield for retribution and the implementation of Shariah."

Since then, it has killed more than 35 policemen in targeted attacks, attacked two schools and killed rights activist Sabeen Mehmud, who was gunned down in her car with her mother at her side.

ISIS was able to expand into two tribal regions near the border with Afghanistan -- Bajour and Orakzai -- when Taliban leaders there switched allegiance to the newer extremist group. The ISIS branch in neighboring Afghanistan is also aggressively trying to expand its presence, putting it in direct competition with the Taliban.

The number of ISIS loyalists in Pakistan is not known. Government officials only recently admitted that they have a presence and insist loyalists here have no known operational links to the ISIS leadership in Iraq and Syria. Still, in one of the first warnings by an official about ISIS, intelligence chief Aftab Sultan told a Senate committee earlier this month that hundreds of Pakistanis have gone to fight in Syria, and some are now coming home to Pakistan to recruit.

One way ISIS militants are trying to recruit and build is through women. One academy for women in Karachi's Baloch Colony neighborhood recruited women by playing ISIS videos in the classrooms, Khitab told the AP. The 20 female students then reached out to middle-class and wealthy Karachi women, urging them to donate their religious tithes to the ISIS cause of establishing a caliphate.

Several women were detained, including the wife of a suspected ISIS operative, and were released after questioning, Khitab said.

ISIS recruiters have been stalking university campuses. For example, the suspected mastermind in the bus attack, Saad Aziz, was a graduate of the U.S.-funded Institute of Business Administration in Karachi.

A professor at the Institute, Huma Baqai, said there are radicalized professors teaching in some of the country's top universities. They "are using the classrooms to mold (students') minds," she said. "There is no scrutiny in what happens in the classroom."

An intelligence official told the AP that security officials have interrogated several university professors suspected of supporting ISIS and trying to recruit students. The official spoke on condition of anonymity because he is not allowed to talk to the press.

"Finding people who are willing to strap on a suicide vest and blow themselves up is easy. There are hundreds, thousands," said Abdullah, the journalist. But the educated are a bigger prize. He said he knows two other journalists whom ISIS tried to enlist. Abdullah said ISIS probably sought him because he was known from his work writing on extremism in the region and has met many militants personally.

Abdullah said his courtship by ISIS began when he received a message on social media from someone offering information for him for a story. Abdullah didn't hear from him again until weeks later, when a man using the same name approached Abdullah as he had lunch in a park outside his office. The man told Abdullah he closely followed his writings -- then said he was from ISIS. Abdullah quizzed him about militants he knew to verify his claims. Near the end of the conversation, the man noted that many professionals were joining IS.

"This was basically his invitation to me to join their rank," Abdullah said. And the man made his pitch.

Professionals can hold leadership posts or be involved in the group's prolific and powerful propaganda machine, which includes sophisticated videos produced with the latest technology and vigorous use of social media.

Al Qaeda in particular is pursuing a similar caliber of recruits. Khitab said it isn't clear who is winning the competition but there are known instances of al Qaeda militants in Pakistan crossing over to ISIS. Most notably, Khitab said, al Qaeda operatives Abdullah Yusuf and Tayyab Minhas defected to ISIS and are believed to have orchestrated much of the group's violence in Karachi.

The past stereotype of a militant as a tribesman from the mountains in traditional garb with bandoliers of ammo slung over his shoulder has been replaced, said analyst Bruce Hoffman, director of the Center for Security Studies at Georgetown University in Washington.

The new generation comes from "well-educated, cosmopolitan, university educated Pakistanis from middle-class backgrounds who can navigate our globalized space whether virtually or physically with facility and confidence." They can use social media, cross borders and fit "seamlessly into global societies."

"They are the new force multipliers of terrorist groups," he said.