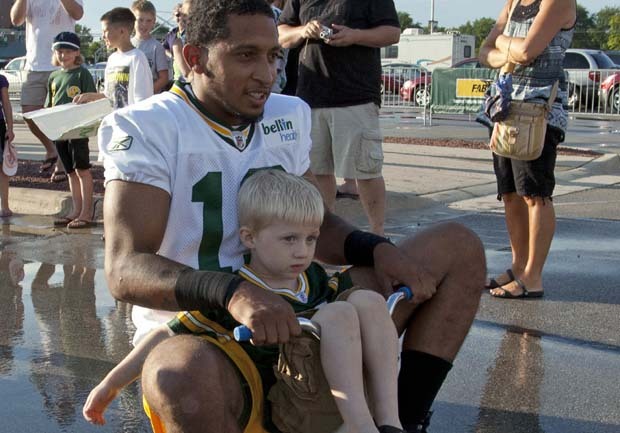 GREEN BAY, Wis. - With dozens of kids screaming, "Here! Here! Here!," carrying signs and calling to Green Bay Packers players, 9-year-old Elyse Ark doesn't do anything fancy to get wide receiver Brett Swain's attention. He first saw her standing quietly with her hand raised in 2008 and they've been riding bicycles together ever since.

"It's pretty cool," she said. "It makes me happy because it's like we kind of get closer."

The kids in the NFL's smallest market take part every year in a charming, training-camp tradition that dates back 50 years to the era of Vince Lombardi. The big men pluck kids from the crowd of yearning faces and use their bikes to ride the equivalent of a couple of football fields from the Lambeau Field locker room to the community-owed team's practice facility across the street. At the end of practice, they make the return trip.

Lombardi was the first coach to ask his players to do it "in an effort to further the Packers' unique relationship" with their fans, the team says. NFL spokeswoman Clare Graff said she knows of no other team that does anything similar.

"It does bring a warmth and connection between the players and organization and the people in this city and kids get just a kick out of it," said Bob Harlan, who started working for the Packers from 1971 and retired in 2008 as president and chief executive officer. "You see them rain or shine waiting for the player to come out."

Ark usually brings her own bike and rides on its back pegs but sometimes she brings her mother's bike because it has a kick stand.

Swain is listed at 6 feet tall and 200 pounds, hardly one of the bigger men on the defending Super Bowl champions. But that doesn't ensure a trouble-free ride on what is still an undersized bicycle.

"On my first bike that I had, my pegs wouldn't go on (and) the chain kept falling off," Ark said.

"Oh yeah," he said. "We've had our fair share of bumps in the road over the last three years but we're good now."

Those three years created a special bond. Swain and his wife, Mary, have been to Ark's house for dinner and Mary Swain even asked Ark to accompany her to a Packers game. Ark created a bright green sign with Swain's name, jersey No. 16 and photos of him.

When asked why Swain goes above and beyond and spends time with her and her family outside of practice, he said it's because of Ark.

"Elyse kind of grasped onto the whole concept of having a rider," he said. "She was just so committed to being here every day and being a fan of not only me but the Green Bay Packers. She's just been a great person. As a player and someone she looks up to, we commend that and I think that helps us and makes this a lot easier."

Harlan said older fans still tell him how they took part in the 1960s.

"It's a long tradition and people who did back in the `60s and `70s are extremely proud of the fact that they were a part of training camp," he said.

He said some of the bigger names in recent years stopped doing it, probably because they would get surrounded and never get to practice. He said Reggie White would make it a point to walk from the practice field to the stadium once a week to be with the fans. He said White would be mobbed, with kids climbing on him.

Harlan recalled most players getting a kick out of it, too, especially after a tiring day. They can bike back to the locker room as someone holds their shoulder pads and helmet.

Swain said the relationship benefits the players and the kids. The players watch their young fans grow up and the kids have someone to look up to.

"It's definitely a good thing for us and we love to do it," he said.

The harsh reality of life in the NFL hit Sunday for Swain and his biggest fan when the Packers cut him. Ark's mother Jennifer said by email that her daughter was sad for the Swains.

"Elyse was concerned that she wouldn't be able to see them anymore but knows their friendship will be life long and that they will continue to stay in ... touch," she said. "That is why this is so special. They truly care about each other and have a connection."