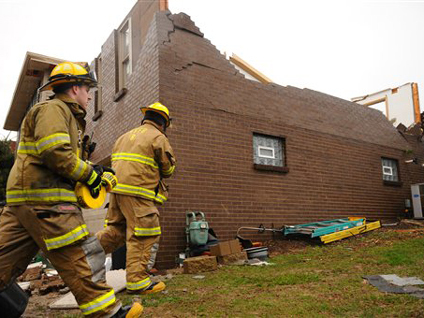 GREENSBURG, Pa. - The National Weather Service has confirmed that a tornado was responsible for destroying 30 homes and badly damaging about 60 more in western Pennsylvania.

Meteorologists have been surveying damage in Hempfield Township in Westmoreland County, about 25 miles east of Pittsburgh.

Schools there were closed for a second day because of heavy damage from Wednesday afternoon's storms.

The storms were part of a far-reaching system that stretched from Nebraska to upstate New York on Wednesday.

In North Carolina, The Hendersonville Times-News reports a Polk County man was killed when a tree fell on his pickup truck. Experts in Tennessee are doing surveys in three areas to see if storms there were tornadoes.

The heaviest damage appeared to be concentrated in Hempfield Township along the U.S. Route 30 corridor about 25 miles east of Pittsburgh.

"I went outside taking my dogs in. I looked at the sky. It was getting real bad," Robin Aaron told the Pittsburgh Tribune-Review about Wednesday afternoon's storm. "I grabbed my daughter and called to my son. We were all curled into a ball" in the family room.

"My whole home is gone. It took everything," Aaron told the newspaper. "I'm surprised I'm not dead."

County emergency management spokesman Dan Stevens said there were no reports of serious injuries in the storm, which uprooted trees, and ripped off roofs — and heavily damaged Hempfield Area High School, and also damaged at least one elementary school.

Several residents reported taking cell phone or camcorder video of a funnel cloud, and Stevens said officials are working on the assumption that it touched down but that remained to be confirmed.

"We've seen the video already, but we have to go out and verify," weather service meteorologist Brad Rehak told the Pittsburgh Post-Gazette. "Tornado damage is more of a circular pattern."

As many as 27,000 West Penn Power customers lost service during the storm, but by Thursday morning about 7,000 remained without power. The American Red Cross set up an emergency shelter at the township municipal building where food was available. Another shelter had been set up overnight, but it was not immediately clear how many people stayed there.

Although Hempfield was hardest hit, other areas in and around Pittsburgh reported heavy rains, high winds, and at least golf ball-sized hail in some locations.

There were reports of roof damage and uprooted trees in Washington County, south and west of the city, and damage to mobile homes in Connellsville, about 35 miles southeast.