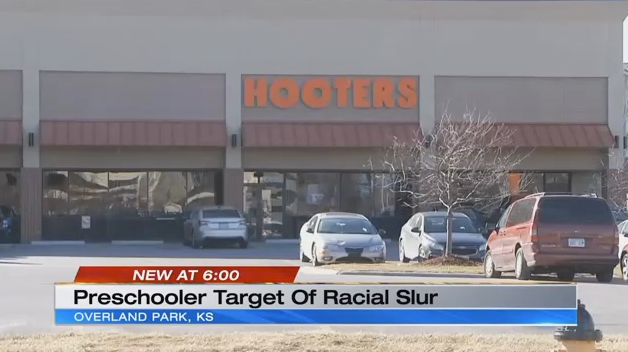 OVERLAND PARK, Kansas -- Authorities say a man allegedly spit on a black child and called him a racial slur Monday night at a Hooters restaurant in Overland Park, Kansas. The alleged incident began when the child wandered away from his family inside the restaurant Monday night and another customer used a racial slur and spit on the child, several witnesses told police.

"He basically said get that little 'blank' up off the floor. The n-word started to get thrown around," a witness who asked to remain anonymous told CBS Kansas City affiliate KCTV. The witness said he was dumbfounded by what the suspect told police who responded to the incident.

"I didn't catch what the officer said to him, but his immediate response was 'It's OK, I'm a fireman,' like that was supposed to blanket cover everything for him," the witness said.

In a statement, Overland Park Police Department clarified that the suspect is a firefighter in Kansas City, not Overland Park, but said they would pursue charges against the suspect relating to battery on a child.

The family told KCTV that they were celebrating a birthday with 20-30 guests Monday evening.

Hooters said in a statement Saturday that it does not tolerate harassment at its restaurants.

"Hooters does not tolerate any harassment or discriminatory language, the safety and well-being of our guests and employees are our utmost priorities," the statement said. "Of course it goes without saying that our policy is to fully cooperate with any law enforcement investigation."