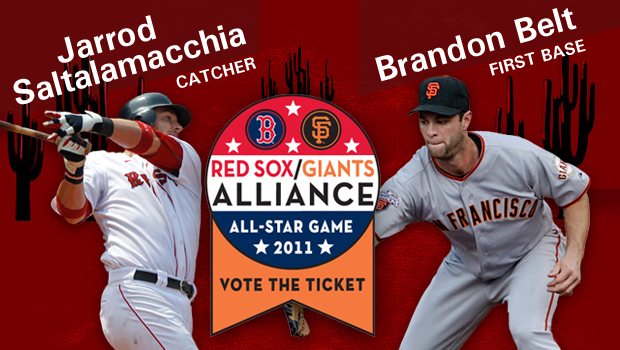 Imagine a baseball universe where Jarrod Saltalamacchia - not Joe Mauer - starts behind the plate at the All Star Game. And playing first base for the NL? Not Albert Pujols but Brandon Belt.

It could happen this year. At least if the All-Star "alliance" recently forged by the San Francisco Giants and Boston Red Sox works.

The storied franchises have teamed up to get all their players on the field in Phoenix for next month's All-Star Game. The game plan is to "vote the ticket" - i.e. cast a ballot for each and every San Francisco and Boston player - regardless of statistical merit.

Since All-Star voting can be done online and through mobile devices (a maximum of 25 times, according to the rules), the Giants technology folks see an easy opportunity to stack the deck.

Bill Schlough, senior VP and chief information officer for the Giants, said that the unprecedented two-team effort was orchestrated to "best position our respective players--and our fans--to win in this year's ballot."

It should come as no surprise that the tech guys at AT&T Park think they pull it off. After all, the stadium boasts the most high-tech amenities in the big leagues, including an unrivaled WiFi network and a "Digital Dugout" that allows fans to see video replays of controversial calls.

So is this Bay Area-Beantown pact a harmless alliance or a devious conspiracy?

The campaign is likely to annoy some purists who would wince at the thought of Marco Scutaro (who is injured and batting just .235) starting at shortstop for the AL.

However, an All-Star start by Scutaro would surely vindicate fans who deem the summer exhibition game as just a popularity contest - i.e. another stage for Derek Jeter and the New York Yankees.

The evidence: Jeter and five of his teammates currently lead in All-Star voting.