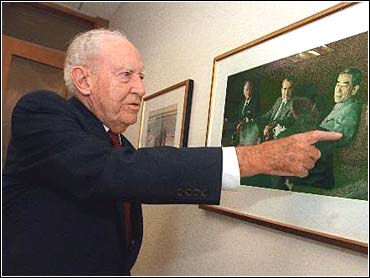 Such were the accomplishments of William P. Rogers, who died this week at the age of 87, that his obituary filled dozens of column inches in the nation's leading newspapers. A pillar of the Republican establishment, Rogers had been a player in so many historic events of the last 50 years that the obit writers had trouble deciding where to focus. Most eventually stressed his years as Richard Nixon's secretary of state, when he was involved in a continuing feud with Henry Kissinger, Nixon's national security adviser, over control of the nation's foreign policy.

The joke making the rounds of Washington's inner sanctums at the time went this way: "Kissinger believes that the only appropriate job for the secretary of state is explaining America's foreign policy to the Chinese.....one at a time." Ultimately, Rogers was forced from his post by his old pal Nixon, despite the fact that their relationship went all the way back to the "Checkers" speech, when Rogers played a key role in saving Nixonƒ­s neck. So much for sentiment in the land of politics.

But, as one of the reporters who covered a later chapter in Rogers' long career, I have a different nomination for his finest hour. I think it came in 1986, when he returned temporarily to government service at President Reagan's request to head the investigation into the loss of the Space Shuttle Challenger, which had blown up shortly after launch, killing six astronauts and "Teacher in Space" Christa MacAuliffe.

I make this selection from a life rich in history not just because Rogers' investigating commission did a great service to the nation by nailing down the cause of the accident, but because of the lessons Rogers left behind for anyone charged with overseeing the actions of a government bureaucracy. Fourteen years after the Challenger disaster, the lessons are still worth remembering.

The loss of the Challenger was such a wrenching experience for the nation that the Reagan Administration quickly realized that the investigation could not be entrusted to NASA, which had managed the construction of the shuttle and controlled the fatal launch. Elements within the space agency would have preferred an in-house, friendly investigation, but Reagan understood that the public and the Congress would not stand for it.

Enter Bill Rogers, a man who knew nothing about space but a great deal about Washington and the pathology of bureaucracies. In fairly short order (this was before the days of "independent counsels" and their patented five-year investigations), Rogers and a team of crack investigators gathered from various federal agencies established that: