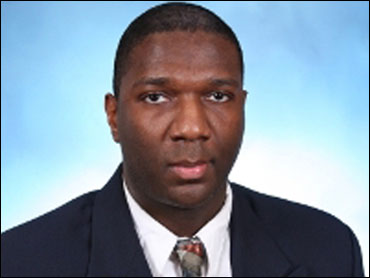 More news out of South Carolina and surprise Democratic Senate candidate Alvin Greene: Just days after making his first campaign appearance Monday, Greene is once again claiming headlines with the release of an independently made video promoting his campaign.

The YouTube video (watch at left), called "Alvin Greene is On the Scene," is a three minute rap song accompanied by a video featuring catchy lyrics about Greene's candidacy and shots of him from various televised interviews. For reasons unknown, basketball superstar Lebron James also makes an appearance several times in the video.

Among the several noteworthy rhymes scattered throughout the song are, "Jobs! Education! Justice, too! My man Al knows what's best for you," and "Shake up DC, sat in the church, And put me, you and Alvin Greene back to work!" The latter is a reference to Greene's campaign slogan, "Let's Get South Carolina Back to Work," which can be seen on his campaign website.

The video also makes reference to Greene's unemployment and the felony charge he faces for allegedly showing obscene images to a college student.

At the time of its release, it was unclear whether the video was actually from the Greene camp. In its credits, the video cites Greene as both the video's writer and director, and claimed his father filmed it. But according to CNN, Greene was not involved in its creation and doesn't know who made the piece.

"I don't know who made it," Greene told CNN. He added, however: "It sounds good. Make sure everybody hears it."