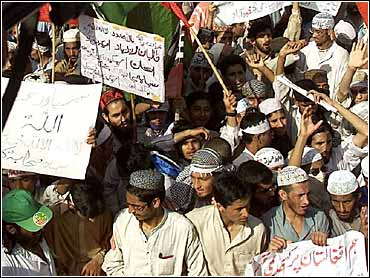 Pakistan is facing a triple threat: warnings from the Taliban that it will attack, opposition from supporters of Osama bin Laden living in Pakistan, and fears that it will not be able to cope with a flood of Afghan refugees.

The Pakistani military moved to reinforce its border with Afghanistan today, holding maneuvers along the frontier.

The Taliban has threatened to attack any nation that helps the U.S and Pakistan is now considered a front line state in the war against
terrorism.

But for the moment, opposition to Pakistan's central government position - backing the U.S. in its pursuit of Sept. 11 terror suspect Osama bin Laden - is coming from within.

Small religious parties within Pakistan are painting the U.S. as an enemy of Islam.

The Pakistani government is unelected - it came to power in a
military coup and so far Islam is not a force it has had to rely on.

But to keep a lid on pro-bin Laden and U.S. demonstrations in Pakistan, that may have to change.

The main opposition party is joining the bandwagon in denouncing the Pakistani national government's decision to cooperate with the U.S. in what is expected to include a military attack on Afghanistan.

"These polices are bringing United States, a leader of the independent world, into hatred, into a cobweb of prejudices," says Raiz Zafrullah Haq, chairman of the Pakistani Moslem League.

The U.S. is trying to help Pakistan overcome such criticism by providing a quick and huge injection of economic aid. The package will include the lifting of sanctions, debt relief and $40 million for food, aid and refugee assistance.

With tens of thousands of Afghans heading this way in anticipation of an attack on the Taliban, that will be crucial.

Roy Herrmann of the United Nations High Committee on Refugees, says the influx of Afghans fleeing the Taliban creates a complicated situation.

"There is the economic burden but I think it's more concern for
stability and security. There are many sources of instability. This accelerates the problem, getting more people in," explains Herrmann.

Many of the borders around Afghanistan have been closed.

For those who can't get out, the prospect of famine looms whether
or not the U.S. and its allies attack.