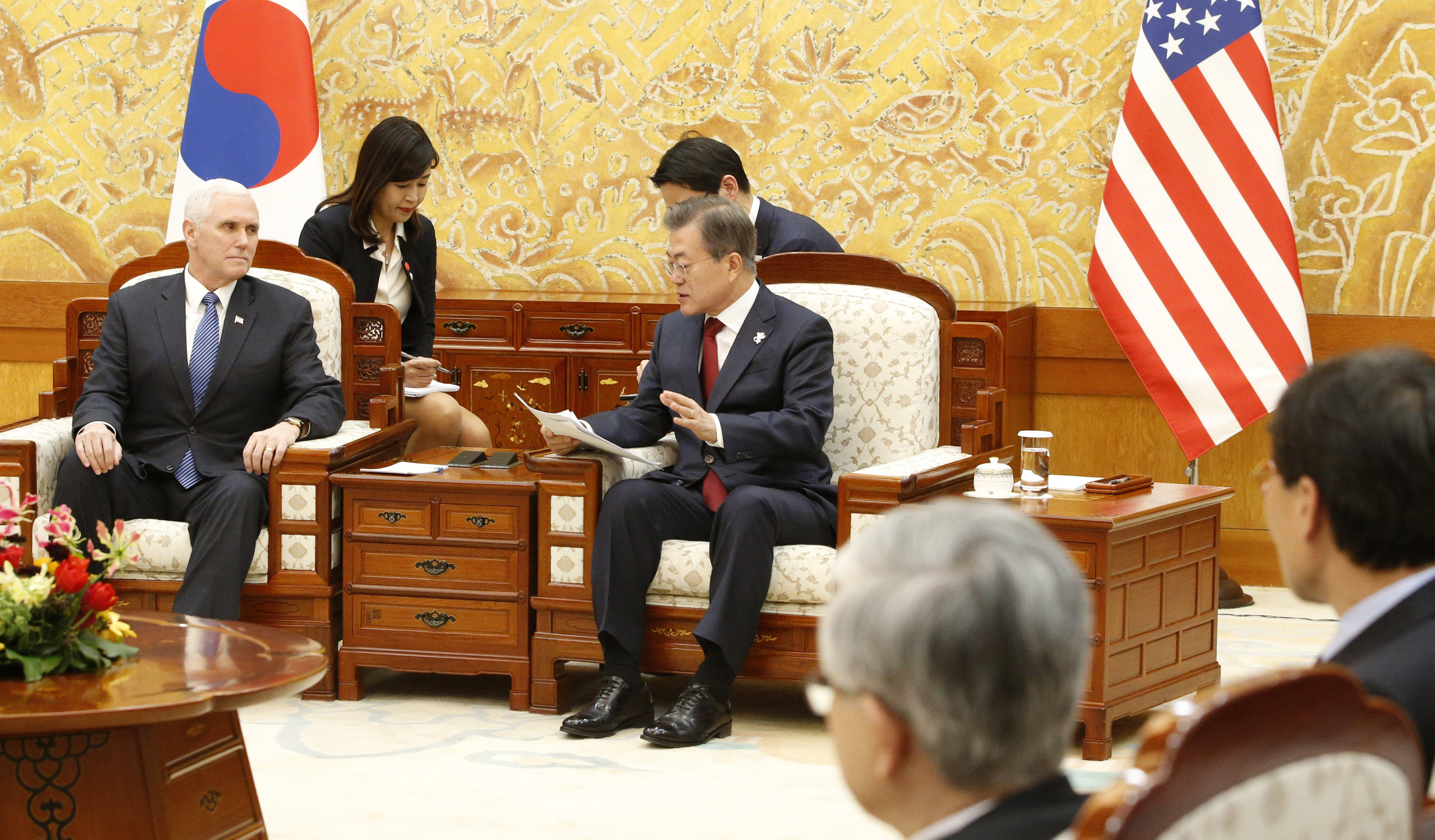 South Korea -- Vice President Pence is using his appearance at the Winter Olympics to call on the international community to take a tougher stance on North Korea's nuclear program and human rights abuses.

He arrived Friday in Pyeongchang to cheer on American athletes, but Pence said he was warning the world against falling for the glossy image of the two Koreas as they are set to march in the opening ceremony under one flag.

After meetings with South Korean President Moon Jae-in and Japanese Prime Minister Shinzo Abe, Pence said there should be no consideration of using the games as an opening for substantive talks with the North until its nuclear program is put on the table in negotiations.

Pence said the U.S. would "demand at the outset of any new dialogue or negotiations that the Kim regime put denuclearization on the table and take concrete steps with the world community to dismantle, permanently and irreversibly, their nuclear and ballistic missile programs."

"Then and only then will the world community consider negotiating and making changes in the sanctions regime that's placed on them today," he added.

Pence, who was to lead the U.S. delegation to the opening ceremonies Friday evening, has pressed the South Korean president to take a more cautious approach toward his nuclear-armed neighbor to the north. Moon has looked at the games as an opportunity to pursue a diplomatic opening with North Korea -- a move the vice president cautioned against.

Pence has avoided public criticism of Moon, congratulating South Korea on hosting the games and pledging continued support in addressing the North's nuclear threat. But privately, officials said, Pence expressed his concern to Moon about the more conciliatory tone toward the Kim regime.

The three leaders met Thursday afternoon for a reception ahead of the opening ceremonies. U.S. journalists were briefly let into a room to see them shake hands and exchange pleasantries via translators before being ushered away.

A spokesperson for the vice president said Pence had not come across any members of the North Korean delegation -- a hypothetical encounter which the North Korean government has expressed no interest in, but the White House has not ruled out.

As he seeks to counter North Korean "propaganda" around the Winter Olympics, Pence has filled the days leading up to the games with his own symbolism and rhetoric.

Eager to put a reality check on the thaw in relations between the Koreas in advance of the games, Pence met with North Korean defectors Friday and paid respects at the Cheonan Memorial in Pyeongtaek, which honors the 46 South Korean sailors killed in a 2010 torpedo attack blamed on the North.

During his meeting with the four defectors, including some who had been tortured and abused by the North, Pence warned that the world would see "a charm offensive by North Korea" Friday. "But today we thought it was important to make sure the truth is told."

"As these people and their lives testify, it is a regime that imprisons, and tortures, and impoverishes its citizens," he added.

Moon, for his part, has taken the opportunity to highlight the visit of North Korean officials to the global competition, referring to the "Olympic Games of peace." He added his hope that it becomes "a venue that leads to dialogue for the denuclearization of the Korean Peninsula."

The games are being attended by North Korean leader Kim Jong Un's sister and about 500 other delegation members. Female ice hockey players from both Koreas will compete as one team. Kim Yo Jong arrived in South Korea  Friday, dressed in a black coat and absorbing a barrage of camera flashes.

She is the first member of her family to visit South Korea since the 1950-53 Korean War as part of a high-level delegation attending the opening ceremony of the Pyeongchang Winter Olympics.

She smiled brightly as she was greeted by South Korean officials led by Unification Minister Cho Myoung-gyon at a meeting room at Incheon International Airport.

Pence's personal guest at the games was to be Fred Warmbier, the father of Otto Warmbier, an American who died last year days after his release from captivity in North Korea.

Before departing Japan for Korea earlier Thursday, Pence warned that past attempts to pursue openings with the North have been met with "willful deception, broken promises, and endless and escalating provocations."

He also ratcheted up his rhetoric on the North's human rights abuses in a speech to U.S. service members at Yokota Air Base in Japan.

"As we speak, an estimated 100,000 North Korean citizens labor in modern-day gulags," Pence said. "Those who dare raise their voices in dissent are imprisoned, tortured, and even murdered, and their children and grandchildren are routinely punished for their family's sins against the state."

Pence also has promised the U.S. will soon unveil "the toughest and most aggressive round of economic sanctions on North Korea ever."

Aides acknowledged that the vice president's cynical message is an unusual one for Pence, but said the circumstances warrant the tone. U.S. officials have grown increasingly dire in their warnings about the North's march toward developing an operational nuclear-tipped ballistic missile capable of reaching the continental U.S.

Pence told reporters that despite disagreements over how to approach North Korea, the state of the alliance between the U.S. and South Korea is "strong."

Administration officials said they had long expected the North would seek to use the Olympics, taking place just 50 miles from the heavily-mined Demilitarized Zone dividing the Koreas, as an opportunity to put a softer face on the regime, and painted Pence's visit as a counterbalance to those efforts. At the same time, the vice president has deliberately left the door open to a possible encounter with North Korean officials expected to be in attendance.

A top North Korean official seemed to rule out a potential meeting with U.S. officials in the North's state-run media on Thursday, but Pence suggested to reporters that it was still a possibility.

"We haven't requested a meeting with North Korea, but if I have any contact with them - in any context - over the next two days, my message will be the same as it was here today: North Korea needs to once and for all abandon its nuclear and ballistic missile ambitions," Pence said.