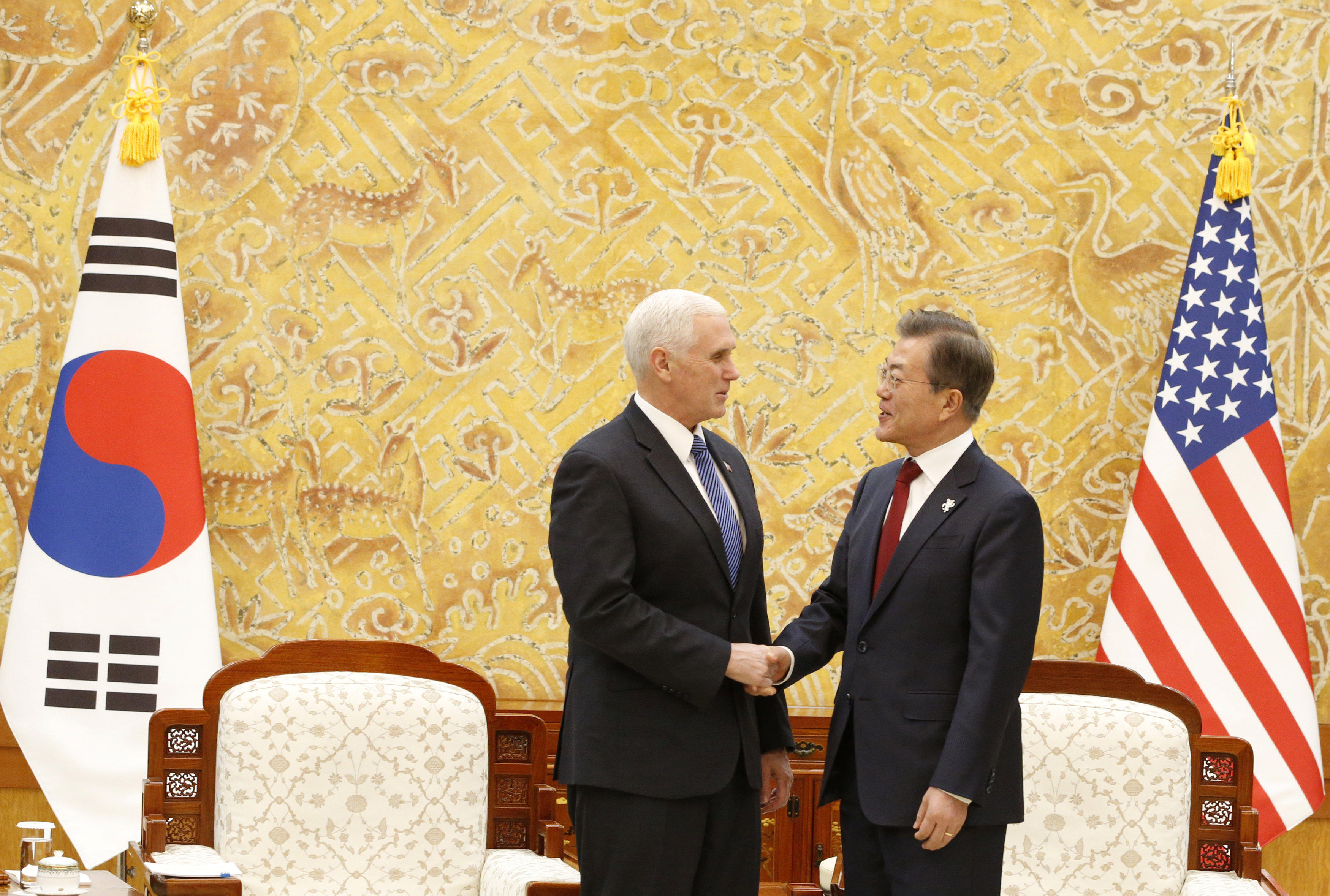 SEOUL, South Korea -- U.S. Vice President Mike Pence is pushing South Korea to adopt a more hawkish stance toward North Korea, as he arrived in the country Thursday ahead of the Winter Olympics. Pence met with President Moon Jae-in to advocate a clear-eyed approach toward his bellicose, nuclear-armed neighbor, warning against North Korean "propaganda" around the games.

Female ice hockey players from both Koreas will compete as one team in the Olympics, which open Friday and will be attended by North Korean leader Kim Jong Un's sister and other senior officials. Moon has looked to the games as an opportunity to pursue a diplomatic opening with the North -- a move Pence cautioned against.

As CBS News correspondent Ben Tracy reports, the South Korean government said Thursday that that Moon would host North Korean delegates -- including Kim Yo Jong, a senior member of the Kim regime -- at a luncheon over the weekend.

Welcoming Pence to the presidential Blue House, Moon took the opportunity to highlight the visit of the North Korean officials to the games, calling them "Olympic Games of peace." He added his hope that it becomes "a venue that leads to dialogue for the denuclearization of the Korean Peninsula."

Pence shied away from public criticism of Moon when they met Thursday evening, congratulating South Korea on hosting the games and pledging continued support in addressing the North's nuclear threat.

"Our resolve to stand with you is unshakable," Pence said.

Pence warned before departing Japan earlier Thursday that past attempts to pursue openings with the North have been met with "willful deception, broken promises, and endless and escalating provocations."

Speaking on the conditional of anonymity to describe private conversations, the officials said Moon and Pence agreed that the goal of any opening with North Korea must be denuclearization -- even if there are differences in how they'd like to get there.

Aides acknowledged that the hard-nosed message is an unusual one for the affable Pence, but said the circumstances warrant the tone. U.S. officials have grown increasingly dire in their warnings about the North's march toward developing an operational nuclear-tipped ballistic missile capable of reaching the continental U.S.

Pence told reporters that despite disagreements over how to approach North Korea, the state of the alliance between the U.S. and South Korea is "strong."

Administration officials said they had long expected the North would seek to use the Olympics, taking place just 50 miles from the heavily mined Demilitarized Zone dividing the Koreas, as an opportunity to put a softer face on its regime, and painted Pence's visit as a counterbalance to those efforts. At the same time, the vice president has deliberately left the door open to a possible encounter with North Korean officials expected to be in attendance.

On Wednesday, the North announced that Kim Yo Jong, the sister of dictator Kim Jong Un, would attend the games, joining the country's 90-year-old nominal head of state, Kim Yong Nam. A North Korean Foreign Ministry official seemed to rule out a potential meeting with U.S. officials in the North's state-run media on Thursday, but Pence suggested to reporters that it was still a possibility.

"We haven't requested a meeting with North Korea, but if I have any contact with them - in any context - over the next two days, my message will be the same as it was here today: North Korea needs to once and for all abandon its nuclear and ballistic missile ambitions," Pence said.

Pence traveled to South Korea to lead the U.S. delegation to Friday's opening ceremonies, but has used his trip to participate in symbolic events meant to shine a spotlight on North Korea's nuclear program and human rights abuses.

Before leaving Japan for Korea, Pence announced that the U.S. would unveil in coming days "the toughest and most aggressive round of economic sanctions on North Korea ever."

He also ratcheted up his rhetoric on the North's human rights abuses in a speech to U.S. service members at Yokota Air Base in Japan.

"As we speak, an estimated 100,000 North Korean citizens labor in modern-day gulags," Pence said. "Those who dare raise their voices in dissent are imprisoned, tortured, and even murdered, and their children and grandchildren are routinely punished for their family's sins against the state."

Pence will meet Friday morning with North Korean defectors as he pays respects at the Cheonan Memorial in Seoul, which honors 46 South Korean sailors killed in a 2010 boat sinking attributed to the North.

Pence's personal guest at the games will be Fred Warmbier, the father of Otto Warmbier, an American who died last year days after his release from captivity in North Korea.