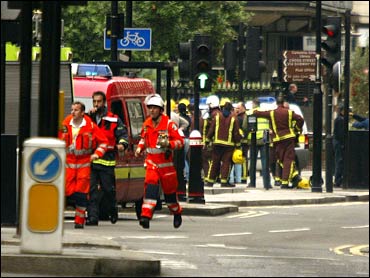 Just hours after celebrating its victory for the 2012 Olympics, the London delegation was "utterly devastated" by the series of explosions that rocked the British capital on Thursday.

"I'm totally distraught," said Keith Mills, chief executive of London's bid team. "I think it goes to demonstrate that no city in the world can escape terrorism these days."

"Even London, that has probably the best and most sophisticated security services in the world finds it difficult to deal with these sorts of attacks," he added.

Mills said the London contingent in Singapore was "completely and utterly devastated."

"This is our town, our city, our home," Mills said. "We're praying for the people who have been affected."

Mills said he planned to leave soon for London with Mayor Ken Livingstone and Sebastian Coe, leader of the team that won Wednesday's vote to host the 2012 Games.

"This was not a terrorist attack against the mighty or the powerful, it is not aimed at presidents or prime ministers, it was aimed at ordinary working-class Londoners," Livingstone said before departing.

"That isn't an ideology, it isn't even a perverted faith, it's mass murder," he said. "We know what the objective is. They seek to divide London."

IOC president Jacques Rogge, who was informed of the attacks during the committee's annual general assembly, sent messages of condolence and support to British officials.

"It is a sad fact of society today that tragic and shocking attacks of this nature can happen in any city at any time," the IOC said in a statement.

IOC spokeswoman Giselle Davies stressed the decision to award the games to London was not in question.

"From what we understand, this is not at all related to the Olympic Games," Davies said. "We have full confidence in the London authorities in securing the event."

Jubilation in the British camp turned to distress within 24 hours of edging Paris 54-50 in the final round of voting by IOC members in Singapore.

"It's terribly unfortunate in terms of timing," Mills said. "And clearly, our celebrations as a result of yesterday will have to be put on hold. Our thoughts go out to the families who've been effected. I hope that the security forces can get to the bottom of this quickly."

British Olympics Minister Tessa Jowell said celebrations planned to coincide with the return of the London 2012 delegation would be canceled. She declined further comment.