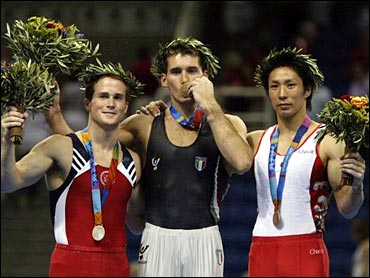 The sport known for beauty and grace also has an ugly side.

Who knew people could get so fired up about a gymnastics meet?

For 10 minutes, the crowd booed and whistled, creating a deafening roar. American Paul Hamm, the all-around champion, was forced to sit around and wait, unable to start his routine because of the noise.

"I felt like I was in a movie," said Hamm, who was able to block out the noise and win a silver medal on high bar. Four-time Olympic gold medalist Alexei Nemov finished fifth, much to the chagrin of the crowd.

Hamm scored a 9.812, tying Igor Cassina for first, but the Italian won a tiebreaker to take the gold. Japan's Isao Yoneda won bronze.

American Carly Patterson added a silver medal on the beam to her all-around championship from last week. It gave the U.S. women their sixth medal of the games.

A nice moment, to be sure, but it was the high bar routine that everybody wanted to see this night.

The showdown, on the last event of the nine days of gymnastics, was supposed to be between Hamm and Yang Tae-young of South Korea, who won bronze in the all-around instead of gold last week because of a scoring error.

But Nemov changed all that.

Flying like a circus acrobat, "Sexy Alexei" put together the most daring performance of the 10 men on the high bar. He did six - count 'em, six - release moves, four in a row and two more with somersaults as he flew backward over the bar.

To the untrained eye, it looked nearly perfect.

"Sometimes there's a difference between what the people think they saw and what the judges think they saw," USA Gymnastics president Bob Colarossi said.

Maybe that's why fans pretty much ignored the big step forward Nemov took when he landed. And maybe that's what started the furor when Nemov's score popped up, a 9.725 that ranked him last among the three gymnasts who had gone to that point.

"Totally unbelievable," said John Roethlisberger, a three-time member of the American Olympic team. "I've never seen a crowd actually call for a judges' meeting and get one."

About five minutes into the booing, the judges huddled and the Malaysian member of the panel, Kin Kin Teh, changed his score. It boosted Nemov to a 9.762, but still kept him third.

When the meet was over, after Hamm and Cassina pushed him down to fifth, Nemov said he deserved at least a bronze.

"It was a little unfair," he said. "Everything is already decided before. Maybe just a small mistake and that gives them the opening to put me down. That's not right."

As the crowd booed, Hamm paced, then sat down and talked to his brother and his coach. The public-address announcer came on and implored the crowd for silence. Twice. It didn't work either time. Nemov just sat there smiling, but minute by minute, the outburst became embarrassing.

Finally, Nemov came to the podium and asked for silence. The crowd finally relented.

"It was a class act by Alexei," said Colarossi, who had seen this much booing only one other time - at a rhythmic gymnastics meet. "What he did was in the true Olympic spirit."

Back in Moscow, Russian fans are angry.

"For me it was like a victory all the same," said Nemov, in interviews Tuesday on Russia's First Channel television. "The main thing is that I finished with dignity, and that makes me happy. And the spectators supported me. I've never seen anything like that anywhere," he said. "It's cool."

It wasn't so cool for Hamm, who found himself Monday performing in conditions he never expected.

"I basically had to tell myself to focus," said Hamm. "It was so distracting."

Twirling after the 10-minute break - "Talk about putting a guy on ice," Colarossi said - Hamm was practically flawless. He brilliantly executed his trademark three straight release moves without any problem, took a slight step forward on the landing and received a 9.812, a mark that easily outdistanced Nemov.

It was also met with raucous boos.

Next came Cassina, who put on a great performance for another 9.812. A complex tiebreaking formula used in gymnastics put him ahead of Hamm and gave him a surprise championship.

After the gymnasts cleared the floor, the judges followed them off and were greeted again by boos. During the medals ceremony, officials put the silver around Hamm and the gesture was greeted with a mix of cheers and boos - an odd ending to an awfully strange night.

In other results from the Games:

They leave the Olympics with gold medals for the third straight time, olive wreaths crowning their heads and a lasting legacy that's just a shade off perfection.

The U.S. softball team is not only the real American Dream Team of these Olympics, it has been the most dominant team of the Athens Games - and maybe any other.

"This is the best one I've ever coached," U.S. coach Mike Candrea said. "It's probably the best team I'll ever see. I think it will go down as a team people will talk about for a long time."

Displaying unmatched power on the mound, around the basepaths and in the batter's box, the United States won gold with a 5-1 victory over Australia on Monday, completing a nearly untarnished romp through an Olympic tournament the Americans made their own.

Lisa Fernandez's four-hitter in the final was her fourth victory of the games, beating Tanya Harding and getting ample help from Crystl Bustos, who hit two homers.

These women were a special unit, united even more so by last month's death of Candrea's wife, Sue.

Jeremy Wariner is just 20 years old. He just led a U.S. sweep in the 400 meters at the Olympic Games.

Cool, calm and with a fluid running style all his own, the lean Baylor University student raced to the gold medal Monday night wearing sunglasses, two earrings and a jingling necklace. After crossing the line, he waved a U.S. flag and embraced the teammates who finished right behind him. But there was no massive show of emotion.

That's not his style.

"It hasn't sunk in yet," he said. "I have a four-by-four relay I've got to concentrate on. It's going to hit me in a couple of days but I've got to get focused right now."

So it was left to others to marvel at the talent exhibited by Wariner, who outsprinted teammate Otis Harris down the stretch to win in a personal-best 44 seconds flat, the fastest time in the world this year.

"I've never seen a white man run that fast," said Grenada's Alleyne Francique, who was supposed to be Wariner's biggest threat but finished fourth. "It was a blazing race, man. The kid is good."

Wariner has become accustomed to the race issue, as a rare white man running sprints that traditionally have been dominated by blacks.

"It doesn't matter what race you are," Wariner said. "It's just ability. I've had a great coach, and he knows what he's doing."

The United States has dominated the event since 1984, winning 13 of the 18 medals in the last six Olympics. Americans also swept at the 1988 Seoul Games.

Dmitriy Karpov of Kazakhstan extended his lead in the decathlon Tuesday. He had the best time of 13.97 seconds in the 110-meter hurdles to push his total to 5,667 points after six of the 10 events. World record holder Roman Sebrle of the Czech Republic was second with 5,562, followed by Americans Bryan Clay (5,512) and Tom Pappas (5,366).

Holmes, a bronze medalist at the 2000 Sydney Games, finished in 1 minute, 56.38 seconds - her eyes wide, mouth open and arms spread like wings as she crossed the line just ahead of Morocco's Hasna Benhassi and Slovenia's Jolanda Ceplak. Both were timed in 1:56.43, and it took a photo to determine Benhassi had captured the silver medal.

Mutola faded in the final few strides to finish fourth in 1:56.51. Jearl Miles Clark of the United States led for most of the race, but ran out of energy on the final stretch and finished sixth.

Hungary's Robert Fazekas won the discus with an Olympic-record toss of 232 feet, 8 inches (70.93 meters). Lithuania's Virgilijus Alekna, the defending champion, got the silver and Hungary's Zoltan Kovago got bronze.

Francoise Mbango Etone of Cameroon won the triple jump, followed by Hrysopiyi Devetzi of Greece and Tatyana Lebedeva of Russia.

In the women's 200, 18-year-old Allyson Felix led three American women into the semifinals Monday, winning her heat in both the first and second rounds.

Felix is the youngest athlete on a U.S. track team that is showcasing its youth in Athens.

"That's the theme," Felix said. "We're just trying to bring a new wave here and get people thinking positive things about track and field. We're just so eager. We have the passion. All this is so new to us. We're just taking it all in."

What's Ahead On Wednesday