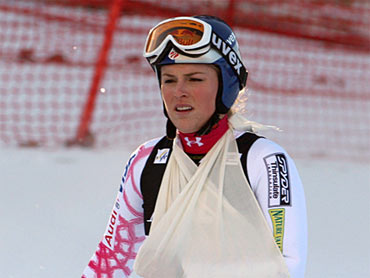 Overall champion Lindsey Vonn injured her left arm in a crash Monday in the opening run of the World Cup giant slalom and Kathrin Hoelzl of Germany won the race.

Hoelzl led after the first run and posted a combined time of 2 minutes, 16.61 seconds to edge Manuela Moelgg of Italy by 0.05 seconds. Taina Barioz of France was third.

Vonn initially thought she had broken her arm after losing her balance and falling backward. An X-ray and MRI exam revealed no break, only a bone bruise.

"It's not a classic broken wrist, but a swelling," said doctor Eduard Sporer of the Lienz district hospital, who added Vonn might be able to race in Tuesday's slalom.

Vonn's husband Thomas said she will test her wrist Tuesday to see if she can compete.

"She has a lot of pain in her arm up by her wrist, but she should be OK," Thomas Vonn said. "Basically what it means is she can ski as soon as she can handle the pain."

Vonn lost her balance on a bump after a sharp left turn, hitting a gate and losing a ski. After staying down for almost 10 minutes and receiving first aid, she put her skis on and went down the hill with her arm in a sling.

U.S. speed coach Alex Hoedlmoser was not at the race, but was with Vonn for training the past two days.

"It was just a bumper, I guess, and it looked worse than it was," Hoedlmoser said.

With the Vancouver Olympics looming, Hoedlmoser said skipping the slalom might be a good idea.

"It definitely would make sense looking at the bigger picture for her to rest for a couple of days," he said. "But I know Lindsey, and I know she wants to race."

If Vonn's arm is put in a cast, it will bring back memories of her injury at last season's world championships, when she sliced her thumb open on a broken champagne bottle and ended up skiing for the rest of the season with her pole taped to her glove.

"Yeah, put the cast on, tape the pole to her hand and here we go again," Hoedlmoser said.

Olympic giant slalom champion Julia Mancuso, who finished second at Lienz two years ago, did not qualify for the second run. The American hit a gate and nearly came to a standstill before finishing more than 5 seconds behind Hoelzl.

Hoelzl, the defending champion in the giant slalom, held off a challenge by Moelgg, who had the fastest second-run time.

"I am very relieved after it was so close in the end," Hoelzl said, following her second World Cup victory this season after winning last month in Aspen, Colo. "Val d'Isere has given me a lot of confidence. I am skiing really well but only think about the next race, not yet about the Olympics."

Maria Riesch, who is the closest challenger to Vonn in the overall standings, went immediately after the American and was distracted by the crash of her close friend. The German skier missed a gate on the middle section of the partly icy Schlossberg course.

"It's hard to stay focused and keep your concentration during such a break," said Riesch. "But it wasn't the main reason for my mistake. It's more down to my lack of self-confidence in GS at the moment."

Vonn stayed top of the overall table on 581 points, with Riesch in second place on 531.

Austria's Kathrin Zettel, who led the GS standings going into the race but was overtaken by Hoelzl, was 0.95 seconds behind the German after skiing off-course in her first run and finished fifth.

Hoelzl has 281 points in the discipline, while Zettel is second with 265. Zettel hurt her right knee in training Saturday and decided to race at the last minute.