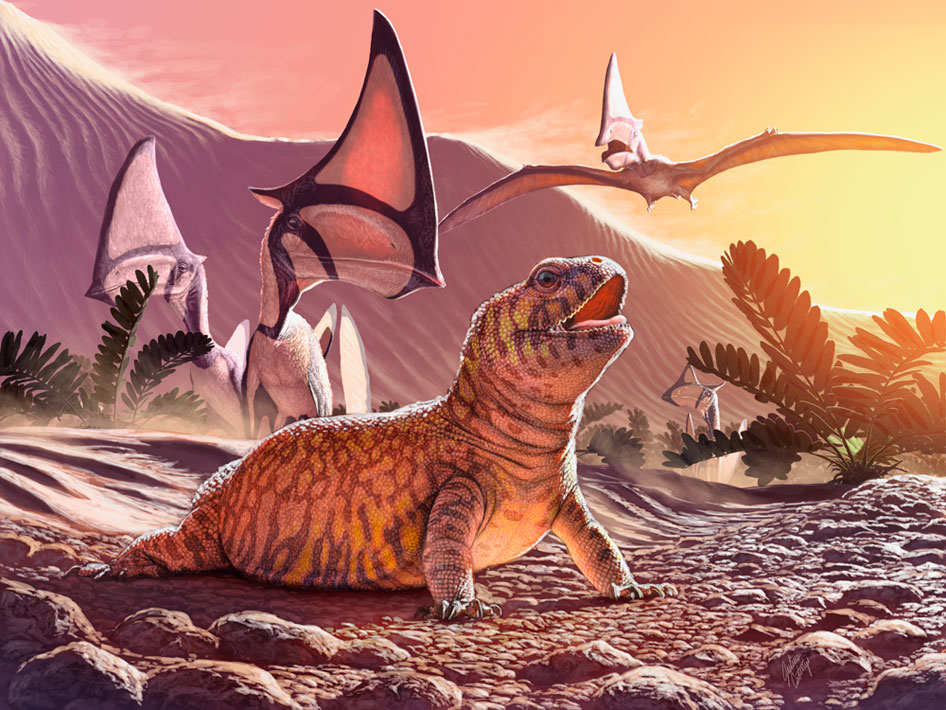 Meet Gueragama sulamericana: a New World iguana with Old World style, at least when it comes to teeth.

The fossil of this iguana, dating to 80 million years ago, was a surprise find for paleontologists and may represent a missing link.

"This is an Old World lizard in the New World at a time when we weren't expecting to find it. It answers a few questions about iguanid lizards and their origin." Michael Caldwell, biological sciences professor from the University of Alberta and one of the study's authors, said in a statement.

The study, published in the journal Nature Communications, says that finding this lizard fossil, with traits from two different parts of the world, shows a different evolution pattern than previously thought. It also may support the long-held theory that the earth once contained a single supercontinent called Pangaea.

"It's a missing link in the sense of the paleobiogeography and possibly the origins of the group," said Caldwell. "It's pretty good evidence to suggest that back in the lower part of the Cretaceous, the southern part of Pangaea was still a kind of single continental chunk."

Paleontologists previously thought that there was a sharp divide in tooth styles that defined the evolutionary origins of these lizards. Acrodontan teeth were relegated to the Old World chameleons and bearded lizards of Europe, Asia and Africa and pleurodontan teeth were relegated to the New World iguanas of North and South America, Madagascar and the Pacific islands.

Finding the fossil in South America challenges this theory. Researchers say the new species suggests that both groups of ancient iguanians made their way around the entire single land mass of supercontinent Pangaea before it broke up.

"This Gueragama sulamericana fossil indicates that the group is old, that it's probably Southern Pangaean in its origin, and that after the break up, the acrodontans and chameleon group dominated in the Old World, and the iguanid side arose out of this acrodontan lineage that was left alone on South America," said Caldwell.

This fossil may help fill in more of the picture of the lost world of Pangaea, the prehistoric single continent that predated the split into seven continents we know today. But it also opens a huge debate about what actually happened to the lizards in the Cretaceous period, and that may mean looking closer at the geology too.

"Each answer only rattles the questions harder," said Caldwell. "We now need to focus on much older units of rock if we're going to find the next step in the process."