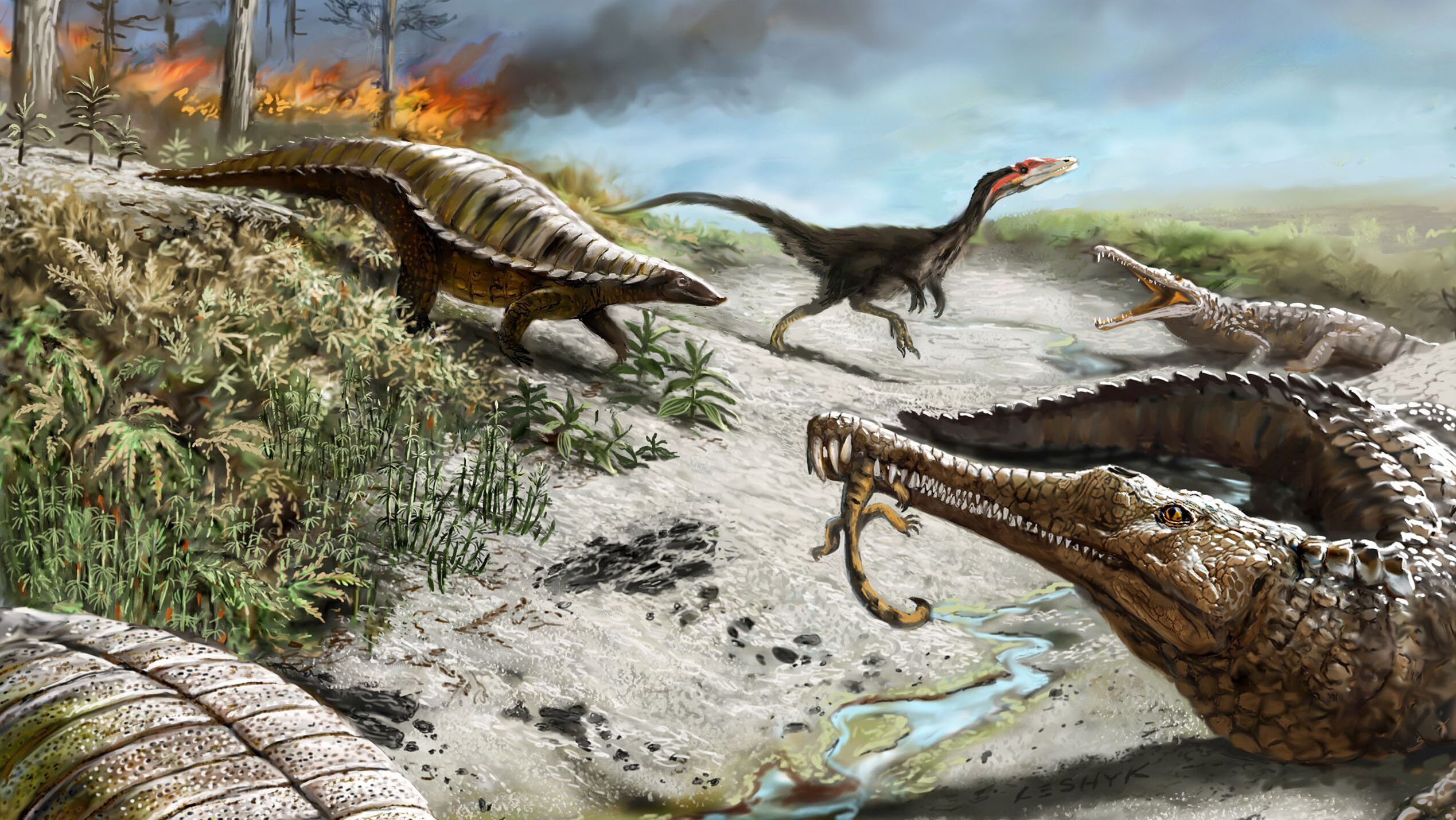 It seems early dinosaurs were not fond of the tropics.

For the first 30 million years after dinosaurs appeared, they steered clear of the equator, a fact that has confounded paleontologists.

Almost no bones of big plant eaters have been found in low latitudes, and only a few small-bodied meat eaters have been unearthed. Though most scientists suspected climate played a role, the reason for the conspicuous absence was unclear.

Now, a study by an international team in the Proceedings of the National Academy of Sciences on Monday concludes conditions were too harsh for them to be able to thrive.

"Our data suggest it was not a fun place," said study co-author Randall Irmis, curator of paleontology at the Natural History Museum of Utah and assistant professor at the University of Utah. "It was a time of climate extremes that went back and forth unpredictably and large, warm-blooded dinosaurian herbivores weren't able to exist nearer to the equator - there was not enough dependable plant food."

It was a time of extreme drought and intense heat. Wildfires swept the landscape, making it difficult for vegetation to get established. For 15 million years after they became common at higher latitudes, these conditions kept dinosaurs away from the Earth's center line.

In the new study, the authors focused on Chinle Formation rocks at Ghost Ranch in New Mexico, better known to many outside of paleontology as the place where artist Georgia O'Keeffe lived and painted for much of her career. The rocks were deposited by rivers and streams during the Late Triassic between 205 and 215 million years ago. During that time, North America and other landmasses of the world were bound together in the supercontinent Pangea and the Ghost Ranch site stood close to the equator at roughly the same latitude as present-day southern India.

The researchers were able to piece together a detailed record of the climate and ecology more than 200 million years ago using dinosaur bones as well as pollen grains and fern spores to understand the plant and animal diversity. Charcoal remains helped them estimate that ancient wildfires reached upwards of 1,100 degrees while stable isotopes of soil carbonate and preserved organic matter show that carbon dioxide levels - which today are 400 parts per million - ranged from 1,200 ppm to about 2,400 ppm.

"The conditions would have been something similar to the arid western United States today, although there would have been trees and smaller plants near streams and rivers and forests during humid times," Whiteside said. "The fluctuating and harsh climate with widespread wildfires meant that only small two-legged carnivorous dinosaurs, such as Coelophysis, could survive."

"This is the first multi-proxy study of climate and associated faunal change for this ecosystem, containing an extensive vertebrate fossil record," according to geochemist Jessica Whiteside, lecturer at the University of Southampton who led the study. "For the first time, we can examine the interplay between climate change and ecosystem evolution at low latitudes, shedding light on what had been a major unresolved aspect of the rise of dinosaurs."

Lindsay E. Zanno, the head of the paleontology research lab at the North Carolina Museum of Natural Sciences, praised the study and said it was an interesting hypothesis to suggest that differences in resource requirements and metabolic rates were the reason dinosaurs shied away from the equator.

But she said it was hard to prove, since there is so little data on the metabolic rates of other animals that lived alongside the dinosaurs during the Triassic - information that could shed light on whether food requirements were a key driver.

"They have a really compelling study and the evidence is very strong for extreme seasonal environments," she said. "The question is how that directly impacts the dinosaurs' ability to move into that area."

The earliest known dinosaur fossils, found in Argentina, date from around 230 million years ago. Within 15 million years, multitudes of species with different diets and body sizes had evolved in much of the world including modern day Europe, North America, South Africa and India.

In the tropics, dinosaurs remained rare among the fossils, accounting for less than 15 percent of vertebrate animal remains. There were no long-necked dinosaurs, or sauropodomorphs - already the dominant plant eaters at higher latitudes. Dinosaurs were outnumbered in diversity, abundance and body size by the reptiles known as Pseudosuchian archosaurs, the lineage that gave rise to crocodiles and alligators.

This trend, however, did not last forever. After the mass extinction of dinosaurs some 201 million years ago, they eventually would return to spread to these once hostile regions.

"After that, they were global," Irmis said.

"The (mass extinction event) opened up a lot of ecological space," he said. "The other thing, although it stayed quite warm at the equator, there was a little bit of cooling that went on and it seems it was enough to allow these dinosaurs to spread to the low latitudes. It may have been that the climate was a bit more predictable, not quite as crazy."

Irmis said the big takeaway from the study was "how big of a role climate played in the evolution of dinosaurs."

"It shows throughout Earth's history, climate has played a big role in the animals and plants that live on Earth," he continued. "This was a time of high carbon dioxide levels in the atmosphere. It really had an impact on these ecosystems and it suggest we're in for some substantial changes in the next 100 years if things keep going the way they do."