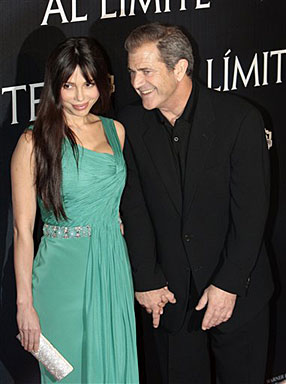 LOS ANGELES (CBS) Suddenly there's more than enough restraint to go around between actor Mel Gibson and ex-girlfriend Oksana Grigorieva, the mother of his 7-year-old daughter.

Celebrity site TMZ.com says Grigorieva got a temporary restraining order from a judge last Monday against Gibson, with two sources saying Gibson had been "extremely violent." That order prohibited the actor from having any contact with his Russian musician ex, according to TMZ.

The website says Gibson's lawyers then got the order modified so he could see their daughter, Lucia -- plus he got a restraining order of his own against Grigorieva, but only to prohibit her from releasing certain information.

In April, the radiant new-couple glow had lost its shine, and they decided to go their separate ways after more than one year of dating, according to celebrity site RadarOnline.com.

At the time of the break-up, both talked of co-parenting and described the split as amicable, but Grigorieva has suggested otherwise saying, "We have split up, suddenly and recently...Unfortunately, I cannot give you the reason. But you will find out everything quite soon," said Radar.

The 54-year-old Gibson has six sons and a daughter in addition to Lucia, and Grigorieva has a son from her previous relationship with actor Timothy Dalton.