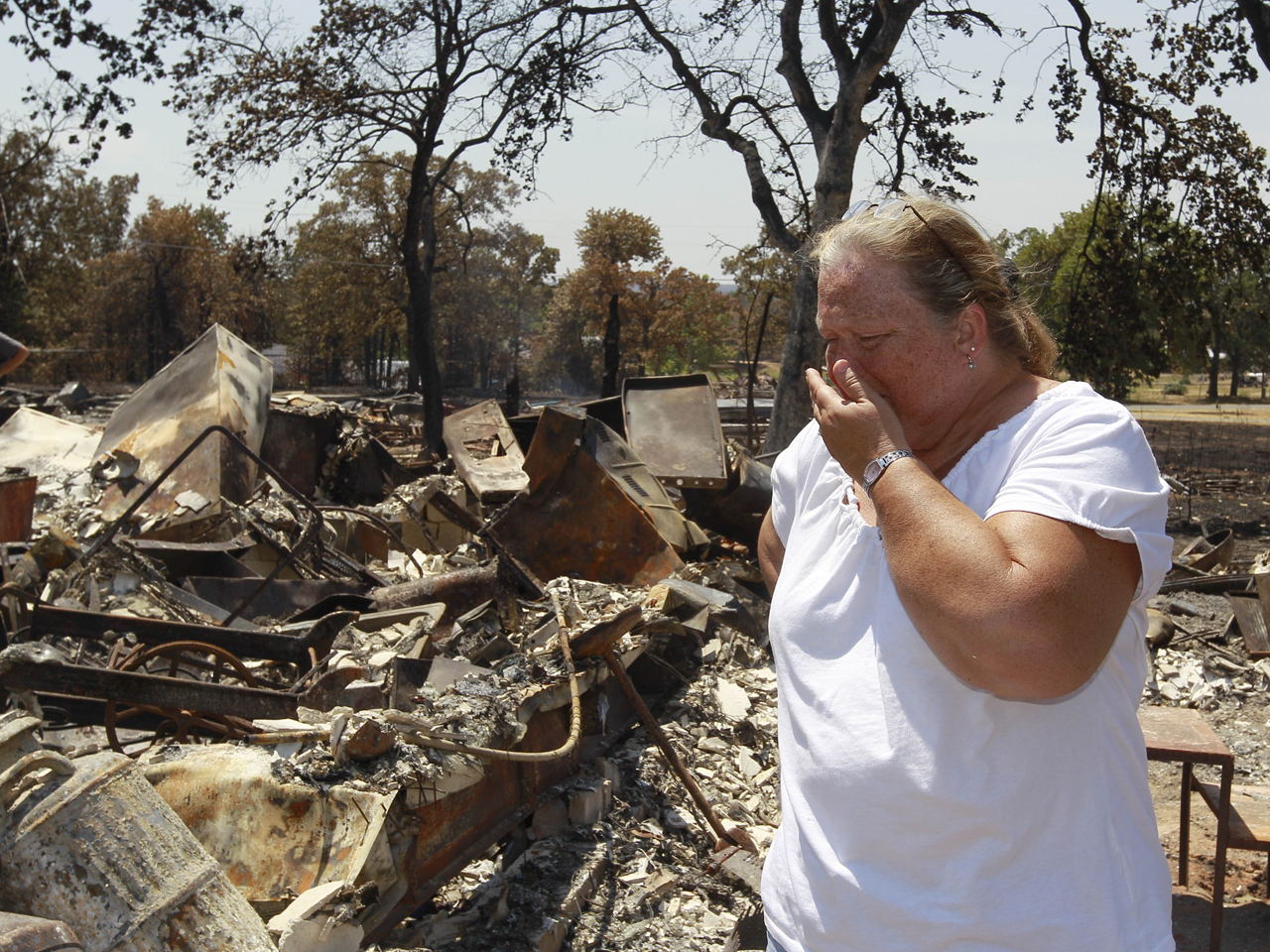 (AP) MANNFORD, Okla. — The fields around Connie Laxton's home in Oklahoma were black with ash Monday after a roaring wildfire tore across her property and ran right up to her gray, brick ranch home — where it suddenly stopped.

The fire line is marked in the grass a foot from house, and the smell of smoke permeates the inside. One side of the three 40-foot pear trees in the yard is charred gray and black, the other is leafy and green.

"I went through a tornado in `84, and it took our house, but we've never seen anything like this," said Laxton, who believes the pear trees deflected sparks that otherwise would have landed on her roof.

Three dozen wildfires have scorched portions of Oklahoma since Friday, leaving only ashes in some spots. Emergency officials said Monday that Cleveland County firefighters recovered a body from a home that had been subject to an evacuation order as a wind-whipped fire roared near Norman on Friday. Emergency managers say dozens of homes are among the 120 structures statewide that burned to the ground.

Tina Frost and her husband, Doug, found the Mickey and Minnie Mouse figurine that topped their wedding cake Monday when they dug through the charred rubble of their home west of Mannford. The discovery was just in time for their 20th wedding anniversary Tuesday. They also retrieved quartz crystals from a long ago vacation and china once owned by her great, great-grandmother.

"It was a fire tornado," Tina Frost said, describing flames that consumed 22 of the 38 homes in her neighborhood. "It came from every direction. There was nothing but fire. I got to be honest. It was pretty scary."

The Mannford-area fire covered nearly 100 square miles in northern Creek County, about 20 miles west of Tulsa. Fires elsewhere in the state consumed thousands of acres — though in some areas it appeared fires hopscotched across the landscape, damaging one home but not its neighbor, much like a tornado.

"Tornadoes don't bother me. I'm not scared of them. A tornado you can take cover, go into a storm shelter. With a fire, you go into the storm shelter and you get burned up," said Christona Fields, who lives just south of Mannford. Her home survived but "smells like a soot pile."

A Mannford church has been serving as a staging area for emergency responders and people who need help. Donated clothes and water were piled under tents, and fire victims grabbed items to help tide them over.

Art Ragan, 71, was at the command post, trying to figure out where he would go Tuesday morning when his money for a motel ran out. Two friends had told him his house burned after he left Saturday.

"I'm carrying everything I've got," Ragan said, wearing a baseball cap and a T-shirt with a pack of cigarettes in the pocket. "This is the worst fire I've seen in 40 years."

Gary McManus, a climatologist with the Oklahoma Climatological Survey, noted with irony that fire conditions were made worse by a warm, wet winter and early spring. Vegetation grew rapidly and then dried in the drought.

"All that green up from the spring, all of that vegetation is just sitting out there as fuel for wildfires," McManus said.

Lower temperatures — meaning under 100 degrees — and calmer winds helped firefighters Sunday and Monday, but McManus warned that without significant rain, another outbreak was likely.

"These types of conditions just wait for the right weather pattern," McManus said.

Amy Elliott, a spokeswoman for the state medical examiner, said Monday the agency had requested dental records in an effort to identify the body firefighters found Saturday in a burned-out Norman home. The age and gender of the victim hadn't been determined.

Authorities said fires were under control or in "mop-up" stages Monday. Most fires since Friday were small and quickly brought under control, and the Mannford fire at nearly 100 square miles was the largest in recent state history, said Michelle Finch-Walker, an agency spokeswoman.

A fire near Luther, which burned just over 4 square miles Friday and Saturday, is being investigated as a possible arson after witnesses reported seeing someone throwing newspapers from a black Ford pickup truck after setting them on fire. Oklahoma County emergency officials on Monday released a transcript from a 911 call.

"I just come off the turnpike. I was following a truck; he was up in the distance," the caller said. "He took off, it was a bluish-black truck. He turned around in the middle of the road, and I got up here where he was at and the whole woods exploded when I got up to him. ...

"It's a grass fire. He threw something out."

Late summer and late winter are typically the peak seasons for wildfires, but they can occur anytime. From November 2005 to March 2006, more than 3,000 fires burned more than 1,320 square miles, Finch-Walker said. The fires killed seven and destroyed more than 1,000 structures, including 380 homes.

McManus said it's too early to say how this year will compare, but "it's certainly not off to a great start."